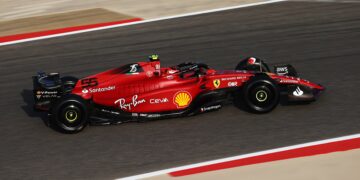 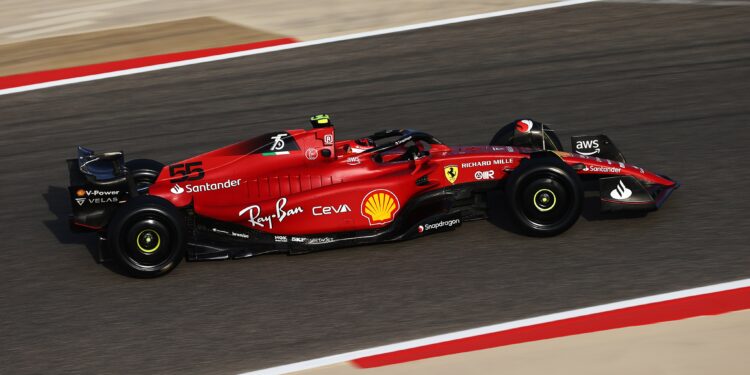 Pre-season testing 2 – Carlos Sainz was the only driver in the 1:33s today as he topped the times while AlphaTauri logged the most laps of the day.

As with yesterday it was a slow start to the afternoon session, for everyone except Yuki Tsunoda, as the AlphaTauri driver pretty much had the track to himself for the first half hour as he put in lap after lap.

While Lando Norris remained in the McLaren due to Daniel Ricciardo’s continuing illness, he was joined for the whole day by Esteban Ocon, Max Verstappen and Tsunoda. Lewis Hamilton, Carlos Sainz, Lance Stroll, Zhou Guanyu and Kevin Magnussen meanwhile would be getting into their cars for the first time today.

Nicholas Latifi was scheduled to continue in the car for Williams but after a brake fire during the morning, the team unfortunately had to sit out the remainder of the day as they focused on repairing the car for the final day tomorrow.

An hour had passed before Magnussen finally got to test the 2022 version Haas car for the first time. The Danish driver hasn’t been in an F1 car since and Haas parted ways at the end of 2020 but now has a new, multi-year contract with the American team after they called him up to take over Nikita Mazepin’s drive.

It was almost 90 minutes into the session before Ocon’s time from the morning was challenged, with Sainz putting Ferrari back on top with a 1:33.943, a time he then shaved a few more tenths off a little later, with a 1:33.532.

The first red flag of the afternoon came in the third hour of running when Ocon, the fastest driver from the morning, felt something wasn’t right with his Alpine and stopped it on track as a precaution. Twenty minutes later the track was back to green and cars were back out straight away, but not for long. Only a few minutes later though and the reds made a return as Norris stopped his McLaren just past the end of the pitlane.

The British driver started pushing the MCL36 back to the pitlane himself before being joined by marshals who helped him get it back to the waiting hands of the McLaren mechanics who were at the pit exit. That issue didn’t appear to be too serious as Norris was back in the car and out on track after a few minutes.

In the final hour there was a nice, little on-track battle between Sainz and Verstappen to give everyone a taste of what the season could have in store.

It's Carlos Sainz and Max Verstappen giving us flavour of what we can expect next weekend 🥳 pic.twitter.com/C0kxKwj0r8

As they tried to do at the end of the morning running, there was a red flag shown with 15 minutes on the clock as the FIA tested out the red flag procedure however this time it was to be a rolling start instead of a standing start as had been attempted earlier. The rolling start didn’t really come to anything and a few minutes later the session ended.

Aston Martin had some more difficulty, Sebastian Vettel had stopped on track during the morning, as Stroll stopped at the pit lane exit as he was heading out for the final minutes of the day but the Canadian was quickly recovered by his team.

With the chequered flag out that meant Sainz topped the times while Verstappen was P2, just less than half a second off. Tsunoda racked up the most laps, ending with a total of 120 for AlphaTauri.

While the day’s testing is officially over for nine of the ten teams, Haas have an extra hour with the track to themselves in order to help them make up the four hours they lost on the first day due to their freight being delayed. They will also get to start tomorrow’s morning session an hour early and have an extra two hours on track at the end of the day.