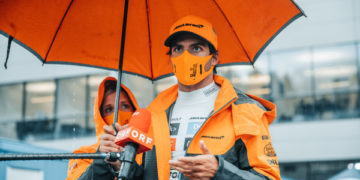 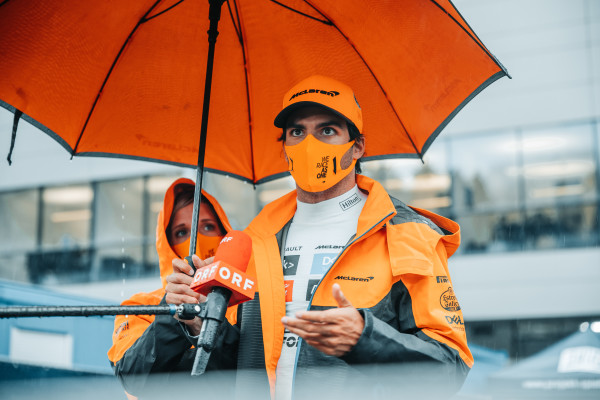 Sainz will start in third on the grid for Sunday’s race which is McLaren’s second row two start this season. The 25-year-old is encouraged by the teams’ performance and ability to react to situations around them.

“In these first races when the opportunities have presented themselves, we’ve been there to grab them,” said Sainz post-qualifying. “We’re still far away from where we want to be, but definitely closer [to the front] and that allows you to be there first on the line, sometimes to grab opportunities.

“I think the team also, on the strategy side, is a very strong team and we are executing races and qualifying very well so it’s a combination of a lot of factors – the pace of the car, a very good strategy, and engineers also, and decent drivers!”

Lando Norris qualified in 6th, but was relegated to 9th after receiving a three-place grid penalty for overtaking cars under a yellow flag in Friday practice.

The Briton echoed his teammates praise but was also wary of the Racing Point cars who start behind in 12th and 17th after a disastrous qualifying session for the pink team.

“I think we’ve made the most so far of our opportunities,” said Norris, “but I don’t think we have the first, second, or third best car, possibly even fourth.

“I think we’re doing a good job in terms of executing everything that we can do. I think we know that the Racing Points are also extremely quick and they proved that on Friday.

Racing Point were the surprise of Friday after Sergio Perez topped practice 1. With the threat of a rain-affected Saturday which would potentially cancel qualifying altogether, Racing Point finished 3rd and 4th in practice 2 in a qualifying style session.

“I think the pace that they [Racing Point] showed on Friday, and with FP2 being a kind of qualifying style run, we knew today there was quite a high chance of it being cancelled and maybe not going qualifying tomorrow morning, “said Norris.

“They had much better pace this weekend than last weekend. I don’t know if it was because of the conditions or they learnt a bit more about their car. But they were very close to Mercedes which I’m sure must worry them a little bit.

“But they’re very close to Red Bull too so. So far from what they showed they’re a little bit out of our reach. But we have a very good opportunity to capitalise on that and get more points than them this weekend, knowing that they’re probably going to be stronger than us in the race.”

McLaren have scared two podiums in the last three races with Sainz coming third in Brazil last year, and Norris bagging his first podium at last weekends’ race in Austria. When asked whether Sainz could repeat the achievement, the Spaniard was coy about holding on to his qualifying slot.

“I think we’re all extremely happy about Lando’s podium last week but I still think we are going to need the help of some others if we want to get another.

“ [Valtteri] Bottas is starting behind me, but if the opportunities come I will try to be there to grab them and I would love to give the team another podium. But we know on pure pace we need things to happen during the race.

I think it’s very important that at every opportunity we have we need to extend the championship lead [over our rivals] because they [Racing Point] are the fastest car in the midfield at the moment. I would even argue that they’re not part of the midfield anymore.