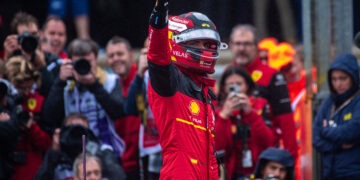 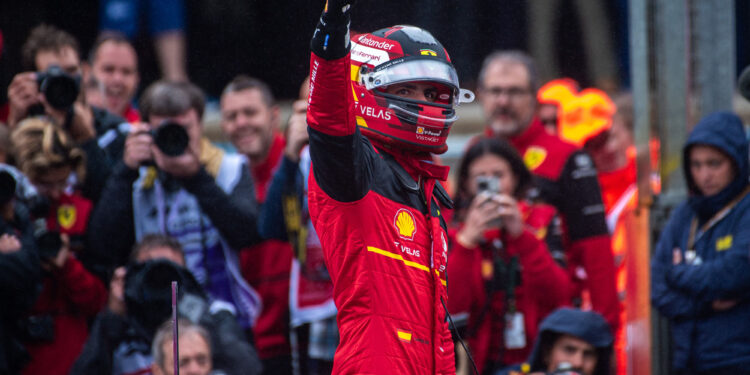 British Grand Prix – Carlos Sainz appeared to have lost the win on so many occasions in an unpredictable race which started with a horror crash for Zhou.

With the overcast skies threatening rain, Carlos Sainz got to lead the pack around on the formation lap for the first time in his Formula 1 career. The medium compound were the tyre of choice for the majority of the grid, aside from George Russell P8 on the hards while Max Verstappen P2, Nicholas Latifi P10, Alex Albon P16, Kevin Magnussen P17, and birthday boy Sebastian Vettel P18 all decided that the softs were the best option.

As the lights went out, Sainz lost the lead on the run to the first corner with Max Verstappen charging through, the other Ferrari of Charles Leclerc also lost out at the start with home-hero Lewis Hamilton storming up from P5 to P3. The race didn’t get further than that though after a big incident at T1 brought out the Red Flag.

There was a long delay then while the extraction teams recovered Zhou Guanyu after he had gone skidding upside down through the gravel at T1 and his Alfa Romeo got buried in the barriers. Also out of the race due to that incident were Russell and Albon, while Esteban Ocon and Yuki Tsunoda took damage but were able to limp back to the pits.

The news then came in that both Zhou and Albon were conscious and being evaluated at the medical centre. When the medical update was announced the footage of the crashes and what led to them was shown.

The FIA advises that following the incident at the start of the race, emergency crews were immediately in attendance, and the drivers of Car 23 (Albon) and Car 24 (Zhou) have been taken to the medical centre. Both drivers were conscious and will be evaluated at the medical centre

Pierre Gasly looked to have been aiming to go through the gap between Russell and Zhou, but the gap started to close but he wasn’t able to back out quick enough so his front tyre came into contact with Russell’s rear. That unsettled the Mercedes which spun him into Zhou and the Alfa Romeo flipped upside down and skidded along the track and through the gravel where it then proceeded to flip completely over the tyre barrier and hit the catch fence on the other side coming to rest upside down against the back side of the barrier.

There was another separate incident which saw Vettel hitting the rear of Albon turning the Williams in to hit the pit wall which then spun him back into the pack where he had more contact with Ocon and Tsunoda before coming to a halt.

During the pause in the action, Russell’s Mercedes was transported back to the pits and footage was seen of the Brit debating Jo Bauer, the Technical Delegate. Russell later told reporters that he had stopped to run over and check on Zhou, when he got back to the car it wouldn’t start so he told the marshals to leave it alone while he went to confer with his mechanics. The next thing he knew was his W13 had been brought back and, as it had received outside assistance, would not be allowed to continue participating.

As the cars hadn’t made it past the second Safety Car line before the Red Flag came out, the last confirmed order of the cars was how they were on the grid, so the original order would be how they restart. That meant Sainz would have a second chance to make the most of his pole position.

Take two was indeed much better for the Spaniard, he held off Verstappen at the first corner and then the Ferraris and Red Bulls were almost four wide into T3, where Leclerc had some contact with Sergio Perez and then the more with Verstappen a few corners later.

There had been some change of tyre choice for the second start with Latifi P8, Gasly P9, Tsunoda P11, Ocon P13 and Vettel P15 being the only five on softs this time. Perez headed to the pits on lap 6 to deal with the damage he suffered in the contact with the Ferrari, which dropped him from P4 down to the back of the field.

As Perez left the track, Hamilton didn’t have as successful a restart as he did the initial start, losing P5 to Lando Norris but the seven-time champion was able to retake it a few laps later.

At the front, while Sainz had pulled over a second in the opening few laps but Verstappen had closed up and unfortunately for the Spaniard, he made a mistake, running wide at T13 which let the Red Bull driver take the lead. Two laps later however and it was Ferrari back in control as Verstappen slowed after having driven over some carbon and felt he had picked up a puncture, the Dutchman had to head to the pits and rejoined in P6.

As Verstappen rejoined in P6, he was not happy with the car reporting there was still something wrong with the car as it felt “100% broken” and the team replied that he was right, there was bodywork damage and a loss of rear aerodynamics but that it was not critical.

Just before the Red Bull drama at the front, there was chaos with the AlphaTauris after Tsunoda tried to go down the inside of Gasly but spun and tagged his teammate which caused him to spin too which dropped the pair down the order.

With Hamilton in P3 closing in on the Ferraris Leclerc, who was the faster of the two, was not impressed with being held up by Sainz. The team decided not to swap the cars, instead asking the Spaniard to go faster, but he was unable and was brought into the pits on lap 20, which gave Leclerc the clear track he wanted but Hamilton was only three seconds back at that point. Sainz swapped to the hard tyres and rejoined the circuit in P3, just ahead of Norris.

Despite the clear track in front of him, Leclerc wasn’t able to match Hamilton’s times, the Mercedes driver being reminded that the Monegasque was running with damage to his front wing and by lap 25 Hamilton had made it to within a second though he didn’t even need to set up a pass as Leclerc was then brought into the pits to swap to the hards, no front wing change though, and emerge behind Sainz in P3.

As Hamilton took over the lead, Verstappen was in P8 after having stopped a second time but was still not happy with the car, saying he had”no grip”, and later despairing that ”I have no rear and front now. I don’t know what happened to the front wing”.

Lap 21 saw the first retirement of the restarted race with Valtteri Bottas having mechanical issues and then on lap 28, Gasly joined him after both AlphaTauris were shown black and orange flags (meaning they must pit for damage to be dealt with) but the rear wing damage was too much to repair.

Lap 29 and Leclerc was once again right up behind Sainz and when he asked what was going to happen, Ferrari said they were free to fight. Sainz was then given a minimum time to match or he would be asked to let his teammate through. The Spaniard wasn’t able to hit the target and so on lap 31, Leclerc was allowed past and started to close the gap to Hamilton.

The race lead changed once again on lap 34 when Hamilton headed to the pits to swap to the hards. It was a slow stop by Mercedes however, 4.3 seconds, and he came back out in P3 2.5 seconds behind Sainz but was told that the tyre warm up would be challenging.

A lap later and Norris made his first tyre change of the race, ditching his mediums for the hards, dropping to P5 behind Perez but with Fernando Alonso only three seconds further back and going faster with fresh hards on the Alpine too.

At the lower end of the top ten Ocon had managed to pass the struggling Verstappen for P8, but then on lap 39 he started to slow and stopped on the old pit straight, with what was later confirmed as a fuel pump issue, and the Safety Car was called.

Sainz and Hamilton took advantage of that to duck into the pit lane and stick on the softs without any loss of position. The majority of the rest of the field followed their lead, aside from the Aston Martins who put mediums onto their cars, while Leclerc and Magnussen decided to stick it out on the tyres they had.

The race got back underway at the start of lap 43 and Sainz, who Ferrari had asked to drop back 10 car lengths to give Leclerc some breathing space, a request which he denied given he was under pressure from Hamilton and they would lose too much if they tried that, retook the lead while Perez got the better of Hamilton to take the final podium position.

Lap 45 onwards demonstrated some incredible racing with first Leclerc and Perez battling over P2 before Hamilton took advantage and overtook the both of them. The following corners saw first Perez and then Leclerc get back ahead of the Mercedes while Alonso pulled right up and looked to try to get involved in a fight over P4 with Hamilton.

Perez and Leclerc go wheel to wheel in the final sector and that allows Hamilton to DOUBLE overtake! 😮 pic.twitter.com/lSChualR4X

While Sainz pulled out a gap at the front and Perez opened one of his own to those behind, lap 48 saw the final podium position swap hands multiple times as Hamilton and Leclerc gave it their all in another grandstand battle but it was the Mercedes driver who made it stick in the end.

After 150 races in Formula 1, and his first pole position yesterday, Sainz finished off the weekend in the best way possible, being the first to take the chequered flag at the end of an F1 Grand Prix. The Ferrari driver, and his Spanish flag, were flanked on the podium by Perez and Hamilton, while Leclerc will not be impressed with falling back to P4.

Alonso brought the sole remaining Alpine home in P5 with Norris a couple of seconds further back in P6. The final few corners saw a battle that no one would have predicted, Mick Schumacher fighting with Verstappen for P7. The reigning champion just managed to hold on, taking the chequered flag just 0.218 seconds ahead of the Haas driver.

Schumacher won’t be too disappointed however as P8 secures him his best finish in Formula 1 and his first ever points. Vettel took P9 while Magnussen was P10 giving Haas their first double points finish since the middle of the 2019 season.

I’m ok, all clear. Halo saved me today. Thanks everyone for your kind messages! pic.twitter.com/OylxoJC4M0