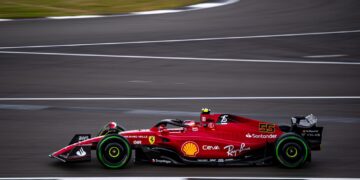 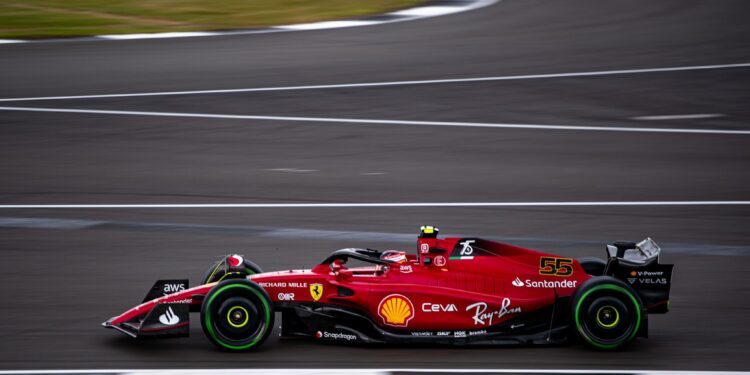 A few minutes before qualifying was set to get underway the rain, which had made brief appearances throughout the day, came down with a fury. Despite that there was a queue of cars at the end of the pit lane waiting to get out on their intermediate tyres as soon as the track went live. The Alpines were the last to venture out, remaining in their garage for the first third of the session before finally getting their tyres wet and setting times.

The first time on the board was Nicholas Latifi’s 1:52.555 but it was Charles Leclerc and the Red Bulls who were trading times at the top of the charts. Halfway through drivers were being told that the rain would be starting to ease off. At that same point, George Russell joined the P1 fight with the Ferraris and Red Bulls but as a dry line started to appear, the times continued to improve lap on lap.

It was all change on the timesheets in the final few minutes of the session but Max Verstappen’s 1:39.129 was undoubtedly the best of the bunch and while Leclerc was P2, he was over 0.7 seconds off the Dutch driver’s time. As it was in the wet conditions for qualifying in Canada, the Aston Martins had no pace in the difficult conditions with Sebastian Vettel and Lance Stroll only managing P18 and P20.

Joining the Astons in the drop zone were Alex Albon, Kevin Magnussen and Mick Schumacher.

After getting slightly drier at the end of Q1, the rain had returned by the time Q2 started and with everyone having set a time it was once again Verstappen at the top with a 1:41.486 ahead of his teammate Sergio Perez. Despite the continuing rain, the drivers were familiarising themselves with the new conditions and were able to shave down their times each lap.

With five minutes left to go the rain had increased just enough to stop the improvements, leaving Verstappen, Lewis Hamilton and Leclerc in the top three spots while Pierre Gasly, Valtteri Bottas, Yuki Tsunoda, Daniel Ricciardo and Esteban Ocon were in the elimination positions.

It was a great day for Nicholas Latifi, the Canadian having had his birthday during the week was having the best qualifying of his career, making it through to Q3 for the first time. An effort made even more impressive given his teammate Albon, who didn’t get out of Q1, has all the upgrades on his car.

The rain had abated at the start of Q3 and it was the two Ferraris who headed out to the circuit first in their hunt for pole. While the rain wasn’t really falling anymore there was still a lot of standing water on the track and Verstappen had a dramatic 360 degree spin on his first fast lap, despite that he still managed a 1:51.332.

While that was happening, Zhou Guanyu managed to take P1 briefly with a 1:49 before Alonso’s 1:46 took the position and then Leclerc and Verstappen brought the times down to the 1:44s and they kept dropping.

The Mercedes drivers had been popping in and out of the pole fight but it looked like it would be between Leclerc and Verstappen at the end with the odds on the reigning champion. However, while the Red Bull driver failed to improve on his final attempt, the same could not be said for Sainz and the Ferrari racer secured his first pole with no one being more surprised about it than Sainz himself after Ferrari informed him over team radio.

The Spaniard’s 1:40.983 put him 0.072 seconds ahead of Verstappen while the second Ferrari of Leclerc will start in P3. Perez boosted himself up to P4 with a 1:41.616 on his final run to be the last within a second of the pole time.

Hamilton will start in P5 with the McLaren of Norris beside him on the third row. Alonso’s 1:42.116 saw him to P7 while Russell could only manage P8. The top ten was rounded out by Zhou and Latifi, the Canadian opting to only go out for a few laps at the end of the session and didn’t set a competitive time.