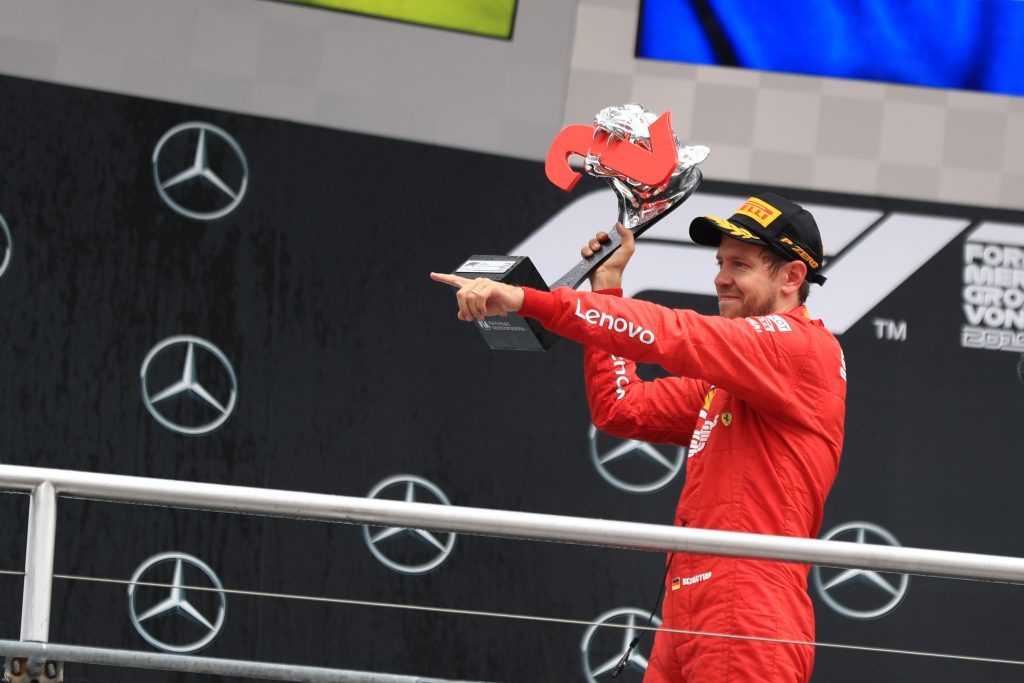 German Grand Prix – Ferrari’s Sebastian Vettel says Ferrari will eventually get their day of glory as they fight to close the gap to the front.

It was a weekend of extremes for the Ferrari drivers and, in particular, for Sebastian Vettel. Having looked strong throughout the practice sessions, Vettel was forced to return to the pits after his first outlap in qualifying with a suspected power issue. A turbo related issue proved too big a task to fix in time for qualifying, and so Vettel was eliminated after mere minutes – a disastrous letdown for the Ferrari driver in front of his home crowd.

Consigned to starting from P20, Vettel drove excellently to rise six places on the opening lap in the fully wet conditions before taking an aggressive approach to tyre swapping. Amongst the earliest to change to the Intermediate tyre under the early Virtual Safety Car, Vettel slowly but surely rose through the order and kept his nose clean through the carnage of the middle part of the race as many drivers crashed on the slick tyres, including teammate Charles Leclerc. He swapped back to the Inters as the rain intensified, before the last stint switch to the Soft tyre for a 19 lap dash to the flag.

After the final Safety Car to cover the recovery of Valtteri Bottas’ Mercedes, Vettel was in P5 but used the Ferrari’s natural dry pace to pass Carlos Sainz, Lance Stroll and Daniil Kvyat to clinch P2. After starting from P20, he was only bested by Max Verstappen’s drive, and Vettel said that the crazy race gave the whole team reason for cheer as they go through a tough period: “Well, obviously after the disappointing day yesterday, where everything was ready: the crowd was ready; I was ready, the team was ready. Obviously we didn’t have qualifying, so starting last today I was very excited about the race in these conditions. Anything can happen.

“It’s a tough period for us. We are pushing very hard, we are doing mistakes, we are not where we want to be, but we need to keep believing in ourselves, in our abilities, our strengths, and I’m confident that our days will come.”

“Obviously today very happy for myself, at my home race and it was great to see the crowd, especially at the end, every time I passed in the car they were really excited. I really did enjoy that. A crazy race, a lot of decisions to make, a lot of communications between the car and the pit wall, but I think we stayed calm and tried to do the best at the time. Most of the time we were right, sometimes we were wrong but we kept it clean and I think that was the key and in the end I really started to come alive in these mixed conditions on dry tyres, we were quite comfortable and able to make good progress, because I think two safety cars to the end I was still not even in the top 10 and I was thinking ‘what happened?’ But it was a day like that and a race like that, so I’m quite happy.”

Speaking about the support he felt from his home crowd and from Italy as the pressure to perform is a constant for him as a Ferrari driver, Vettel said: “It’s certainly a tough time for us as Ferrari with days like yesterday because it shows that we have things that we need to sort out, we have things that we need to do better but I think in this period it’s very important that we keep the morale, we keep supporting the team. From the inside that is happening, from the outside I hope it’s happening as well. I know the tifosi are behind us but sometimes the headlines can shift in either way so it’s important that we keep the support because I think things are moving, we are pushing very very hard and when it comes to passion I think we put a lot of effort and a lot of hours in; the people are very determined. I’m as impatient as everyone else to get the results finally but it will take a little while. We know what we can improve and that’s where we are working on but in the meantime I hope that people are a bit patient and give us that freedom in that time.”