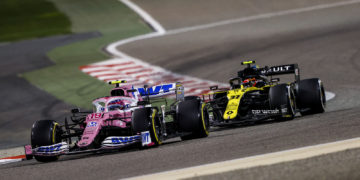 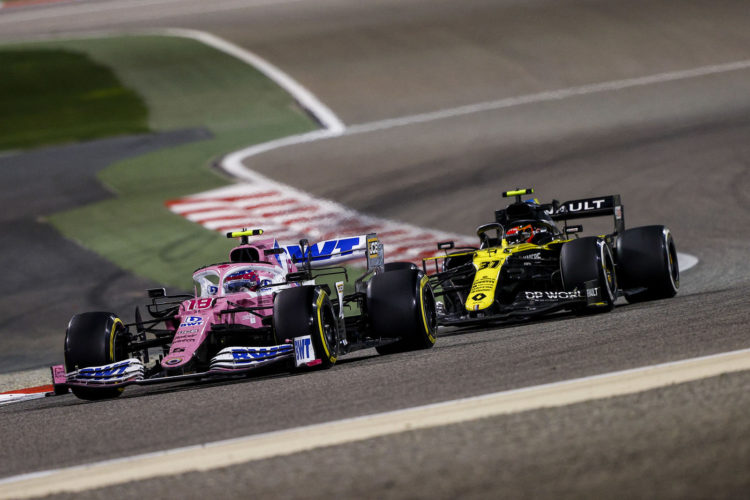 Click here for the complete results from the 2020 Sakhir Grand Prix.

Sergio Perez has won the Sakhir Grand Prix, having come from the very back of the field after a first lap incident.

Perez was caught up in a first lap incident while racing Ferrari’s Charles Leclerc and Red Bull’s Max Verstappen. Perez was tagged going through Turn 3 when Charles Leclerc steamed up the inside, with the Racing Point spun around and facing the wrong way. The Safety Car was deployed, with Perez pitting immediately for repairs and fresh tyres.

At the front, it was a tense battle between the two Mercedes drivers. Off the starting grid, George Russell made the better start to take the lead from Valtteri Bottas into Turn 1. Bottas then made a small error going through Turn 2 and had to fend off Verstappen, Leclerc and Perez. When Leclerc tagged Perez, he went off into the barriers. Verstappen, running wide to avoid the issue, ended up in the gravel and was powerless not to hit the barrier too. Both Leclerc and Verstappen were out on the spot as the Safety Car came out.

When action resumed, George Russell set about easing open a gap over Valtteri Bottas. This he managed, extending his lead to 3 seconds by the time the pit window opened. With the Safety Car having extended the first stint, it enabled the Mercs to make sure a one-stop was a viable strategy.

Russell was the first of the Mercs to stop, swapping to the Hard tyre, while Bottas stayed out on track. Russell initially seemed unhappy with the power from his Merc engine following the stop, and was given instructions to fix it. Russell appeared to find pace then, eating into Bottas’ lead by about five seconds to ensure he came out in the lead when the Finn pitted for the Hards.

Russell then led by 8.5 seconds over Bottas after the stops. Meanwhile, Sergio Perez had put in a stellar stint on the Hard tyres to work his way up the order. Quickly back into the points, he wrong-footed teammate Lance Stroll through Turn 4 to take the initiative and head the Racing Point challenge as the race entered its second act.

Bottas had started to eat into Russell’s lead at the front, but the complexion of the race changed with 28 laps to go. Jack Aitken, driving in his first F1 race with Williams, lost control exiting the last corner and hit the barriers. He broke his front wing, and the resulting debris triggered a Safety Car. Mercedes opted to bring in both of their drivers for another stop, double stacking their drivers for the run to the flag. However, Russell received a mixed set of tyres on his car, with some of Bottas’ tyres being fitted to his car. The mistake was realised seconds later when Bottas was in the pit box, with the team opting to refit his same Hard tyres rather than fit incorrect tyres to his car. Russell was forced to pit again the following lap to rectify his tyre mismatch, losing track position as a result.

The race restarted with Perez leading from Ocon and Stroll, with Bottas in P4 ahead of Russell. With Bottas on old Hards and Russell on fresh Mediums, it was game on to see if Russell could claw back to the front. Quickly despatching Russell with a great move around the outside of Turn 6, Russell quickly hunted down Stroll and Ocon to take P2. Now 3 seconds behind Perez with 12 laps to go, Russell was on a charge as he slowly started to reel in the race leader. However, a puncture was to wreck his charge with 10 laps to go. He returned to the pits once again and came out outside the points. A charge to the end on the Softs resulted in him crossing the line in P9.

Perez capitalised on the misfortune of the others to clinch a sensational first win, coming from the very back to win by 10 seconds over Esteban Ocon. Teammate Lance Stroll finished in P3, making it a Racing Point 1-3.

Carlos Sainz finished in P4 for McLaren, with Daniel Ricciardo in P5 for Renault, and Alex Albon coming home in P6 in the sole remaining Red Bull Racing. Daniil Kvyat finished in P7, with Valtteri Bottas slipping to P8 as he struggled home on his old Hard tyres. Russell finished in P9, and is under investigation by race stewards for driving a lap on tyres from Bottas’ allocation. The final points position went to Lando Norris, as he recovered from a back row start after a McLaren engine change.

Pierre Gasly finished in P11 for Alpha Tauri, with Sebastian Vettel in P12 for Ferrari. Antonio Giovinazzi finished P13, just ahead of Alfa Romeo teammate Kimi Raikkonen – the Finn spinning during Lap 1 as he raced in the lower midfield. Kevin Magnussen finished in P15, with Jack Aitken managing P16 despite his slip up. Pietro Fittipaldi finished in P17 for Haas, the last of the classified runners, on his debut in Formula 1 with Haas. Nicholas Latifi retired with an oil leak in his Williams, with Verstappen and Leclerc’s first lap collision accounting for the other two retirements.