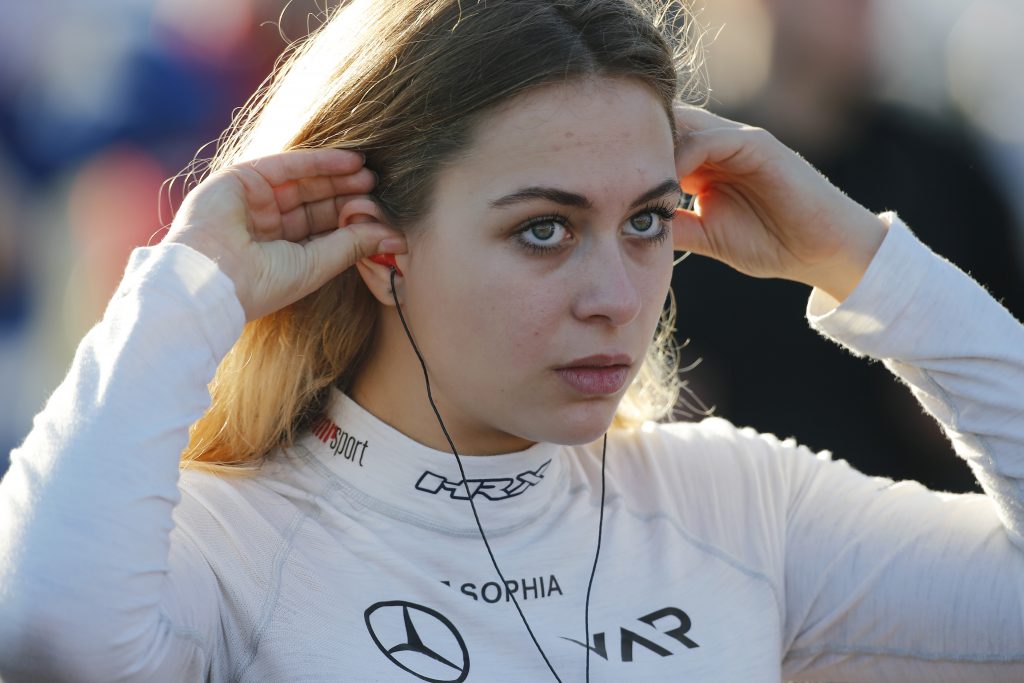 Sophia Floersch says she was very upset when she learned other people had been involved in her Macau GP crash last month.

The now 18 year old racer was involved in a serious accident at last month’s Macau GP, leaving her with a spinal fracture that required hospitalisation.However, surgeries in the days following the accident went successfully, and she was released from hospital over a week after the crash. Four other people who were initially hospitalised, including track marshals and photographers have all since been released.

In an exclusive interview with Germany’s Motorsport-Magazin.com, Floersch spoke at length about the terrifying crash that was seen all around the world.

“It took me a few days to come round, because I was heavily dosed with painkillers. I didn’t watch the video until the Friday after my accident, which was five days later.”

“At first, I didn’t know that other people had been injured in the crash. I found that out later in the evening when my dad told me that everyone else involved had survived. I burst into tears. I think that would have been the worst thing for me if something very bad had happened to other people because of the accident.”

While Floersch is now fully recovering at home and will enjoy Christmas with family in Germany, her racing career will resume in 2019 with Van Amersfoort Racing in the new Formula European Masters series, the replacement to the F3 European Championship.

She says that there was never any doubt in her mind that she could return to a cockpit, even while still in hospital: “There were, of course, questions about whether I would carry on and what my long-term plans would look like. I have always been very frank about my desire to continue and that I’m not going to let an accident get me down. Most people I speak to understand that. I mean, I’ve been in this sport for the past 13 years, it’s my life, and I want to get into F1. Giving up that dream because of an accident like this just doesn’t make sense to me.”

With other motor racing series on winter shutdown, Floersch’s monstrous crash went viral on social media due to the severity of the impact when she flew off the track. With Formula 1 stars also tweeting their support as she recuperated, she said she couldn’t believe the extent of the support she received online: “The accident was at 15:30 local time, and they handed me my mobile phone at 20:30 that evening. I had hundreds of messages on WhatsApp and suddenly 155,000 followers instead of 38,000 on Instagram. I thought: “What’s going on?!” My experience of the accident was quite different.”

“I had no idea at the time that it looked so bad and would feature so prominently in the news. I didn’t know what to make of the whole situation, because I hadn’t seen the accident. I also didn’t understand why even the teachers at my school were writing to me. I thought: “How do they know about the accident?”. I still haven’t read all the reports from around the world because there were just so many of them. I only realised on the Friday, Saturday, Sunday after the operation that famous racing drivers such as Fernando Alonso had also written to me.”

“In the meantime, I’ve put the accident behind me, because I’m just so happy that I can move all my limbs and start convalescence so soon. The doctors say that I had millions of guardian angels that day. They are very upbeat about me being fit enough towards the end of February or early March to get back in a racing car again.”

I always say: “My grandmother gave me a nudge from heaven.” My grandma is my guardian angel. When I used to go karting, my grandma always said it was too dangerous and that I shouldn’t be doing this sport. And now, she’s keeping an eye on me from up there.”