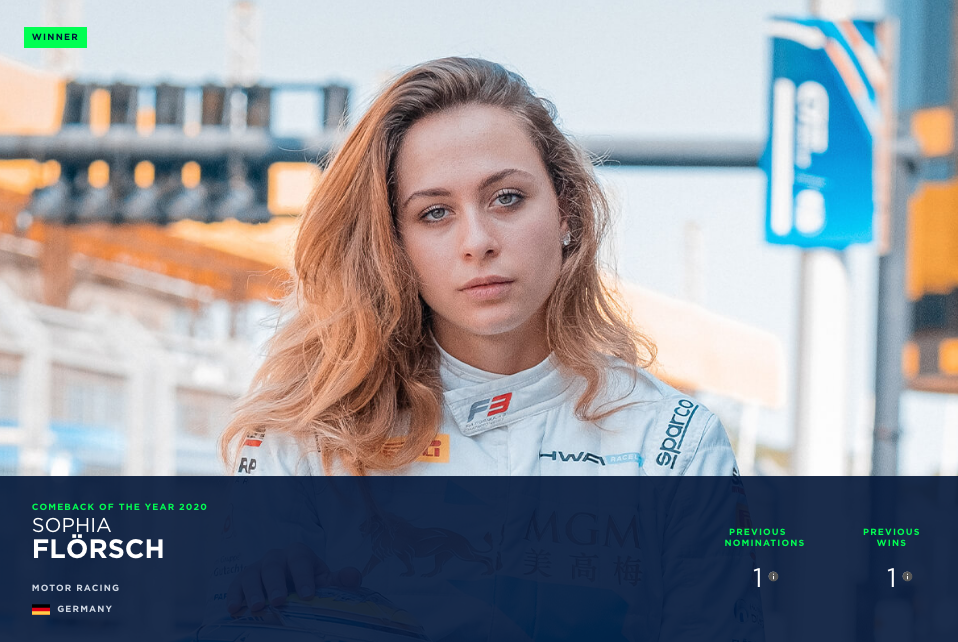 Sophia Floersch wins ‘World Comeback of the Year’ at Laureus

Sophia Floersch wins ‘World Comeback of the Year’ at Laureus

Sophia Floersch has won the Laureus Award for ‘World Comeback of the Year’ for returning to motorsport in 2020 after her terrifying Macau crash.

The Laureus Awards recognise sporting excellence and achievements across all sports, with several categories bringing together top sportspeople from various disciplines. Earlier in the evening, Lewis Hamilton won in the category ‘World Sportsman of the Year’ but will share the award with joint winner Lionel Messi – the first time the award has had a tied winner.

This was in recognition of her determination to get back into the motorsport ladder after suffering spinal injuries in a horrific crash during the 2018 Macau Grand Prix, while driving for Dutch team Van Amersfoort.

Recovering over the course of the months after, Floersch returned to drive for HWA Racelab during testing at Valencia in October and earned herself a seat with the team to return to the Macau Grand Prix just a few weeks later. Qualifying in P21, she retired on Lap 8 with a mechanical problem.

“This is a dream come true to be honest,” said Floersch as she collected the award. “I’m very happy to be here and to be holding this in my hand now is a huge honour. Standing in front of you all, you are all my idols, and I look up to you all – it’s incredible!”

“I started in this sport when I was four and I loved it from the first moment onward.” Floersch beamed.

“I had this crash in Macau and it was bad, and the video was really bad. But it wasn’t so bad for me in the car and I remember everything. It happened so quickly, you don’t even really realise it. I want to thank my parents at that point, my little sister who I think had an even harder time than me then! I want to thank Toto Wolff and the Mercedes F1 team, who helped me in that week and helped me with the doctor, Doctor Ceccarelli, who was next to me for the week in hospital in Macau.”

“It was hard times, but I always had the goal to come back in a racecar which happened 106 days later.”

“Having this in my hand now is incredible, and hopefully I’ll be here again in a few years as World Sportswoman of the Year!”

"This is a dream come true."

"Standing in front of you all, you're actually all of my idols."