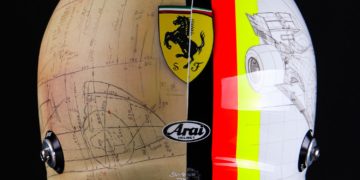 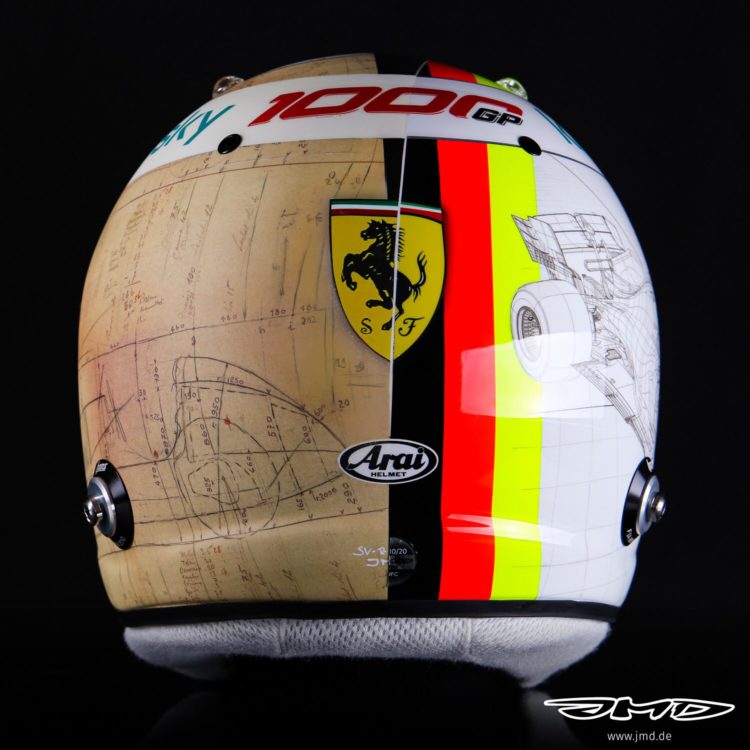 Tuscan Grand Prix – With this weekend celebrating Scuderia Ferrari’s 1000th Grand Prix in Formula 1, there are some special helmet designs to look out for.

The two Ferrari drivers, Sebastien Vettel and Charles Leclerc, will not only be competing in a throwback liveried SF1000, but they also celebrate the history of the Italian team with their new helmet designs.

Leclerc commemorates Ferrari’s championship winning drivers and their cars, as well as Enzo Ferrari himself. The fifteen World Champions, from Alberto Ascari in 1952, Niki Lauda in the 1970s, Michael Schumacher’s domination at the start of the 2000s, to the most recent champion in the iconic red team Kimi Raikkonen in 2007. Leclerc’s helmet is finished off with the tricolore bisecting the helmet front to back.

Vettel meanwhile merges old and new with technical drawings of Ferrari’s first and current race cars. The SF1000 computer generated drawing is displayed on the German’s usual crisp white helmet while the hand drawn 125 F1, with all the associated measurements and calculations, are on a ‘discoloured paper’ beige. The German flag and Ferrari logo also split between their modern vibrancy and a more aged look.

McLaren’s Lando Norris has another dramatically different design this weekend. The young Brit marks Mugello’s first time as a Formula One Grand Prix host with ‘Mugello’ in green, white and red printed from front to back, the names of the corners appearing all over the helmet, while Norris’ usual pattern is coloured red on one side and green on the other. The design is optimised for the onboard camera as from the front, the tricolore displays backwards.

Daniel Ricciardo also has a new lid for the Tuscan Grand Prix and while it has also been inspired by an Italian legend, the Renault driver is using Valentino Rossi rather than Ferrari as his muse. The Australian’s helmet was already one of the more unusual on the grid but he has now updated the grey leopard print base to an actual leopard print base which does give the design a fresh and “wacky” look that Ricciardo was aiming for.

Click on the images below to have a good look at the designs for this weekend.