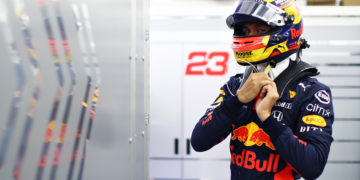 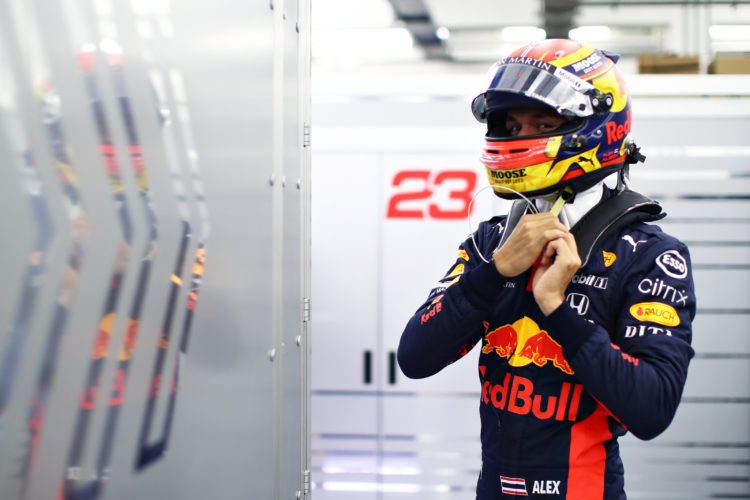 BAHRAIN, BAHRAIN - DECEMBER 04: Alexander Albon of Thailand and Red Bull Racing prepares to drive in the garage during practice ahead of the F1 Grand Prix of Sakhir at Bahrain International Circuit on December 04, 2020 in Bahrain, Bahrain. (Photo by Mark Thompson/Getty Images) // Getty Images / Red Bull Content Pool // SI202012040288 // Usage for editorial use only //

Sakhir Grand Prix – In light of Sergio Perez’ race win in Bahrain, it’s time for Red Bull Racing to swallow their pride and hire from outside.Sergio Perez’ opportunistic race win at the Sakhir Grand Prix was one of those rare circumstantial victories that comes about every so often in Formula 1. Generally such wins for drivers from midfield teams come about as a result of a mixture of fortune and circumstances and this was one of those occasions. However, generally, the wins don’t come about for such drivers when they’ve been spun off on the first lap of the race.

Then you have to look at Alex Albon’s race. The Red Bull driver had, in theory, the fastest car of anyone apart from the Mercedes drivers but, while Max Verstappen utilised that car’s pace to qualify P3, Albon could only manage P12. No misfortune, no extraneous circumstances, just plain and simply not quick enough to progress into Q3.

With Max Verstappen eliminated on the first lap of the race, through no particular fault of his own, and Charles Leclerc and Sergio Perez also cleared out of the way, the stage was set to give Albon a real opportunity to shine and show that he could pick up the pieces for Red Bull on a day where Mercedes didn’t have their usual firepower.

Instead, it was a race of anonymity for Albon. An early battle with Ferrari’s Sebastian Vettel eventually went his way, and Albon then successfully managed to keep Sergio Perez behind him for ten laps. It’s worth remembering that Albon’s Medium tyres were just a single lap older than Perez’, as Alex had had free choice for the first stint as he had qualified in P12. Having fallen straight to the back after his first lap clash with Charles Leclerc, Perez passed Albon on Lap 21 to continue his progress through the field.

Perez, of course, went on to win the race comfortably as Mercedes also took themselves out of contention with their tyre blunder. You would assume that the Red Bull would finish on the podium too but, no, Albon only ever got as high as P6 and had to settle for that position at the chequered flag.

“It was a very strange and scrappy race and I’m not really sure how it all unfolded but climbing from 12th to sixth isn’t too bad but we hoped for more today.” said Albon afterwards. “We expected to be slow on the straights and we only just about to managed to stay with the other cars when we had DRS but it was so hard to overtake and I was having to dive bomb into Turn One to get the moves made.”

Despite the track having only a handful of corners, Albon had set his car up to be pointlessly quick through the second sector but, as a result, struggled down each and every straight. He explained: “It was very hard to race with the configuration of downforce we had, and we were quick in parts of the track like sector two where you just can’t overtake.”

Albon is no rookie at this stage. He’s in F1 two seasons, and has been a Red Bull driver for over a year. The team have shown uncharacteristic patience with him as he has struggled to match Max Verstappen on either qualifying or race pace. A fair approach from Red Bull, in light of what Pierre Gasly has managed since being demoted, but their steadfastness is now costing them points and, possibly, victories.

Albon looks every bit as shaky as he did when he first joined the Red Bull team. While understandable at the tail end of 2019, it is now the end of 2020, and Albon looks absolutely no closer to matching Verstappen than he did a year ago. If anything, he is further away as his confidence has been whittled away.

Contrast that with the performance of George Russell at Mercedes. Making his debut in the same race as Alex Albon at the start of 2019, Russell’s had pretty awful machinery to drive for the past two years. However, the instant he’s handed a car capable of winning, he took it by the scruff of the neck and put in a performance you’d expect from Lewis Hamilton. All of this with just two days preparation, and being physically uncomfortable in the cockpit. Russell has proven that a top driver can simply step into a modern F1 car, and perform to a high standard.

The Red Bull RB16 appears to be a reasonably tricky car to drive. But it is a fundamentally fast car, as Verstappen proves on almost every occasion as he gives Mercedes a run for their money. Alex Albon continues to fail to exploit the car’s pace, and there’s little evidence to suggest that some magic cure is about to be found at any moment.

The problem is that Red Bull seem to have taken the approach that Albon is, out of nowhere, suddenly going to start realising his potential and perform to Verstappen’s level. The issue with that is that, after two years, Albon’s potential remains a mystery. Is there actually any more potential to show? What if this is simply Albon’s level, and he simply cannot find the extra few tenths that Verstappen can always extract?

For 2021, Red Bull need to sign Sergio Perez. The Mexican driver, apart from being a Grand Prix winner, is a known quantity. Rather than waiting for a driver of unrealised potential to, maybe, one day, start performing more strongly, why not sign a driver who is more than potential? Sign the known quantity. Sign the man, a free agent, who is performing at the level that Red Bull demand. Sure, he may not be a Red Bull ‘product’ and maybe he’s a bit more expensive to hire than Albon. But, if Red Bull reach the end of this season and decide that Albon is their choice once again for 2021, they deserve the mediocrity that that will entail.

For a team who have proven to be capable of complete ruthlessness, bordering on callousness, towards their drivers in the past, it appears Albon is their attempt to be the opposite. It’s evident they badly want him to succeed, and vindicate their decision to promote him and not be seen to destroy a career once again. The problem is that, on this occasion, maybe that ruthlessness is needed.