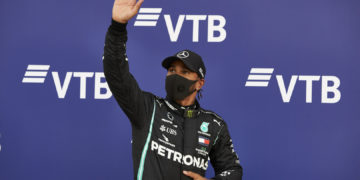 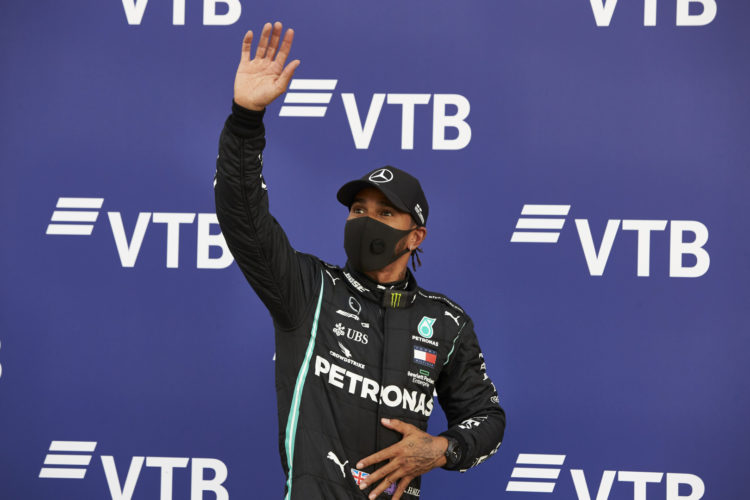 Russian Grand Prix – Lewis Hamilton is just two penalty points away from a race ban after picking up two separate penalties during the race at the Sochi Autodrom.

Lewis Hamilton says that the race stewards are ‘out to get him’, as he is just two penalty points away from a race ban.

The championship leader was on eight penalty points heading into this weekend after picking up two at Monza for entering a closed pitlane.

Hamilton carried out two practice starts ahead of the race at Sochi, with both being well outside the pitlane. Pulling over to the right halfway up towards Turn 2, Hamilton was still in the pitlane exit feeder lane at the time. The stewards announced an investigation prior to the race, due to the race director’s clearly outlining a defined zone for practice starts after the red lights at the end of the pitlane. Technically, the wording doesn’t specify that the area isn’t against the rules, leading Hamilton to say “Where does it say that in the rulebook?” when informed that he would be given two separate five second penalties as a result.

The penalties took Hamilton out of the running for the race win, and his mood wasn’t improved afterwards by the application of two penalty points on his licence. He is just two points away from a race ban, with four race weekends to come before the Turkish Grand Prix before any points come off.

Hamilton bemoaned the penalties as ‘ridiculous’ afterwards: “I’m pretty sure noone has got two five second penalties for something so ridiculous before. I didn’t put anyone in danger, I’ve done this at a million tracks over the years. Never been questioned on it. But it is what it is.”

Addressing the stewards’ decision, he said: “They’re trying to stop me, aren’t they? But it’s OK. I just need to keep my head down and stay focused, and we’ll see what happens.”

Team boss Toto Wolff said: “I think Lewis has faced a lot of adversity in his life and to all of us the penalty seems harsh. Never before a pre-race reconnaisance lap infringement but pitlane speeding was penalised with an in-race penalty.”

“So, that is new and that could be debated. I think things go against him harshly sometimes and I think if you are the more successful driver you have to take that sometimes.”