Lando Norris: Being teammates with Sainz was ‘a pleasure’

Toyota have taken a dominant 1-2 victory at Le Mans, with Fernando Alonso, Sebastien Buemi and Kazuki Nakajima winning in the #8 car.

Sebastien Buemi, Kazuki Nakajima and Fernando Alonso claimed victory for the second consecutive year, driving the Toyota TS050 in the LMP1 class. They finished 17 seconds clear of the sister car, the #7, driven by Mike Conway, Jose Maria Lopez & Kamui Kobayashi. The #7 had been the clear favourite to win for most of the race, having led comfortably throughout almost the entirety of the 24 hours. However, a late race puncture and a bizarre error from Toyota where they replaced the wrong tyre meant that the #8 was able to take the lead and win the race.

Marking the end of the 2018/2019 WEC ‘super-season’, this means that the combination of Buemi, Nakajima and Alonso also win the WEC title with five victories from the eight rounds. However, Alonso won’t be sticking around to defend that title as he has opted to leave WEC behind for now to take on new, as yet unconfirmed, challenges. His seat at Toyota for next season will be taken by Brendon Hartley. This World Championship victory is Alonso’s first since winning the 2006 F1 title with Renault, and is Sebastien Buemi’s first since the Formula E title from 2015/2016. 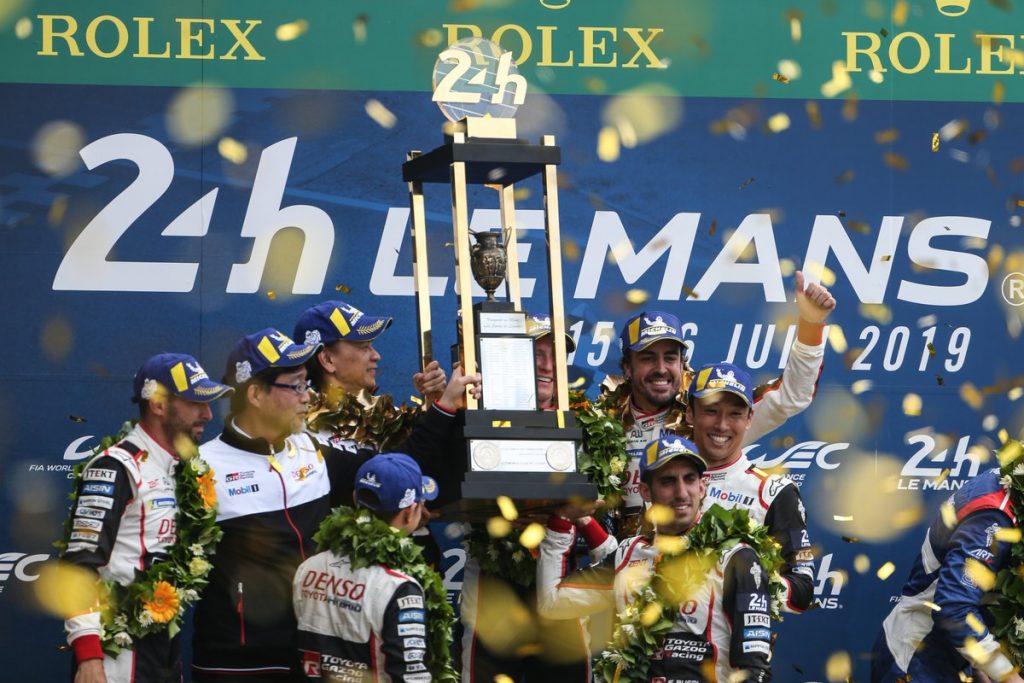 SMP Racing finished third, with their LMP1 BR Engineering BR1 finishing six laps down on the Toyotas in front. Their #11 car, driven by Vitaly Petrov, Mikhail Aleshin and Stoffel Vandoorne, was the only SMP car to finish as the #17 of Stephane Sarrazin, Sergey Sirotkin and Egor Orudzhev broke down at the ten hour mark.

Rebellion Racing finished P4 with the #1 of Neel Jani, Andre Lotterer and Bruno Senna finishing a further three laps down, and led home the #3 car of Thomas Laurent, Nathanael Berthon and Gustavo Menezes by six laps.