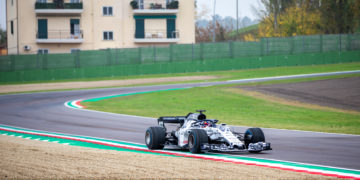 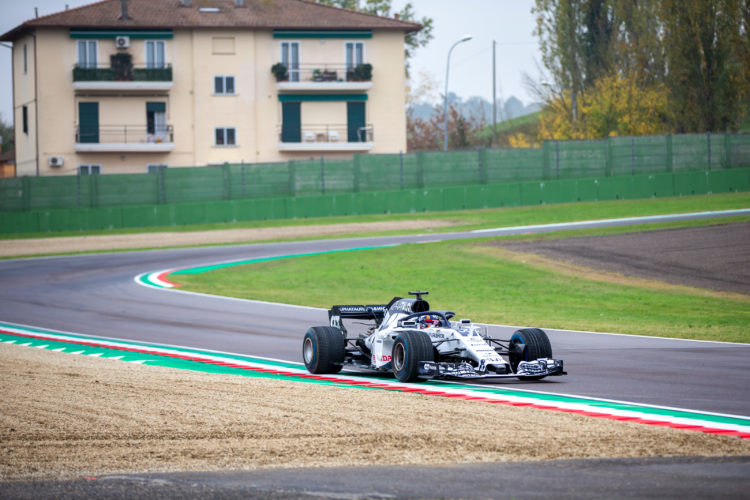 Yuki Tsunoda took the wheel of the 2018 Toro Rosso to get used to Formula 1 machinery ahead of his expected promotion to Alpha Tauri.

Yuki Tsunoda headed to Imola with Alpha Tauri on Wednesday, as the Japanese driver is preparing for an expected promotion to the team in 2021.

As part of his preparations, the team brought him along with the 2018 Toro Rosso in order to set him loose to get 300 kilometres of track time under his belt.

This he completed, and the Japanese driver said after his day at the wheel that he had found the car quite physical to drive compared to his usual Formula 2 machine.

“Easier for the driving, but also harder in terms of physicality.” compared Tsunoda. “I expected it to be less tough physically, as my neck is quite strong and I’m confident in my neck as I don’t feel much in Formula 2. After I drove the F1 car though, but I feel it now. Especially in the braking zone, but the braking power is more than I expect.”

“I must do more training in that before my next time driving an F1 car.”

Tsunoda is expected to be taking part in first practice in Bahrain, taking part in an FP1 session as he continues his preparation for Formula 1. The Japanese driver says the most impressive aspect of the car was the power generated by the V6 hybrids: “The power, when you apply the throttle, you feel big power from the engine. More than a Formula 2 car, more than I expected. Even in the rain, it was really big performance with the initial throttle. More in the rain than even in Formula 2 in the dry. That was the biggest surprise in the day and the braking performance in the dry is really big…huge!”

However, Tsunoda says he was quite relaxed about his first day in an Formula 1 car, saying that he got a normal nights sleep after enjoying a big seafood meal near Imola on Tuesday night. He says he was underwhelmed by the initial realisation of sitting in an F1 car, but found it ‘really cool’ when the tyre blankets came off.

“Nothing special to be honest.” admitted Tsunoda about his initial impression just before heading out on track. “I might feel ‘oh, I’m in a Formula 1 car, in a few minutes, but not much difference in leaving the pitlane between an F1 car and a Formula 2. It just felt normal, but it did feel special when the mechanics were giving the signal to remove the tyres from the blankets. That was really cool, I’ve only ever seen it in games. But I always wanted to see it in real life and see how it feels like. That felt a bit special.”

Tsunoda said the toughest part to get used to was all the extra switches for different modes and configuring settings while trying to drive quickly.

“Easy to remember, but hard to react quickly while driving.” said Tsunoda, who is lined up to replace Daniil Kvyat alongside the already confirmed Pierre Gasly next year. “Whenever I heard from the engineer to change something in the first session, I struggled to react quickly and change the button. I’d have to look at the steering wheel or slow down to change the setting but, by the end, the practice on the Red Bull simulator helped to get used to it. By the end of the session, it was consistently faster. Then my laptimes in the race simulation were consistent, despite making it loads of changes every lap.”

Tsunoda still has to finish in P5 in the Formula 2 Championship to guarantee his superlicence eligibility for 2021, and is currently P3. However, three drivers behind him are just seven points behind, meaning a bad weekend could set him back considerably. He says that the entire weekend is likely to be tough, seeing as he’s likely taking part in FP1 with Alpha Tauri.