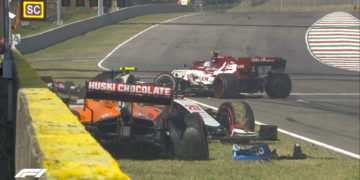 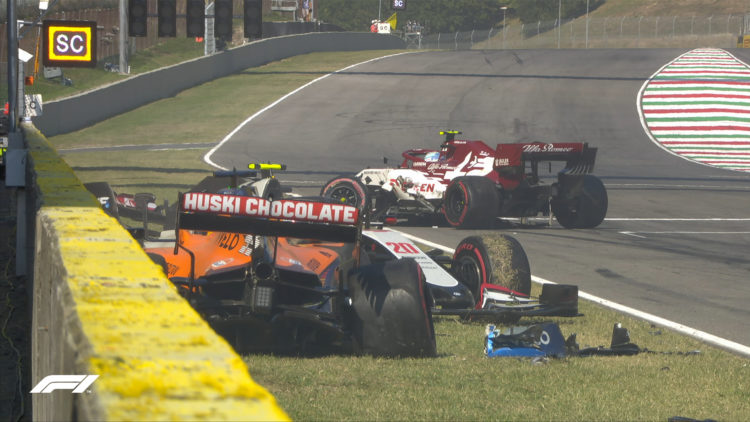 Tuscan Grand Prix – Two early crashes at Mugello have resulted in the race being red flagged to allow the marshals to clean up and make barrier repairs.

The Tuscan Grand Prix has been suspended under red flags after two early crashes.

On the first race start, a collision between several cars was set in motion by Kimi Raikkonen getting twitchy exiting the first corner. He made slight contact with Pierre Gasly who, in turn, had Romain Grosjean alongside him. Raikkonen ended up tapping the back of a slow starting Max Verstappen as a result. The Red Bull driver and Gasly were immediately knocked out, while Raikkonen and Grosjean were able to get back to the pits for repairs. There was a separate incident at the following corner, when McLaren’s Carlos Sainz spun and this resulted in Sebastian Vettel tapping the McLaren and damaging his front wing.

The Safety Car was deployed for the clean up, withdrawing five laps later. With Mugello’s main straight being so long, Valtteri Bottas left it late on the straight before committing to the restart in order to prevent the cars behind from passing him into Turn 1. However, some of the midfield cars attempted to guess the point of restart and met a brick wall of slow cars blocking them.

This resulted in a pile-up involving Alfa’s Antonio Giovinazzi, McLaren’s Carlos Sainz, Williams’ Nicholas Latifi and Haas’ Kevin Magnussen. All were uninjured, but voiced their anger on team radio with how the race was restarted.

The race has been red flagged in order to allow for a proper clean up and repair of the track barriers.