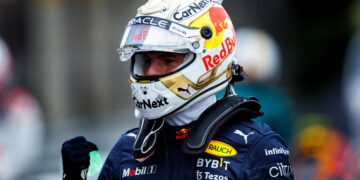 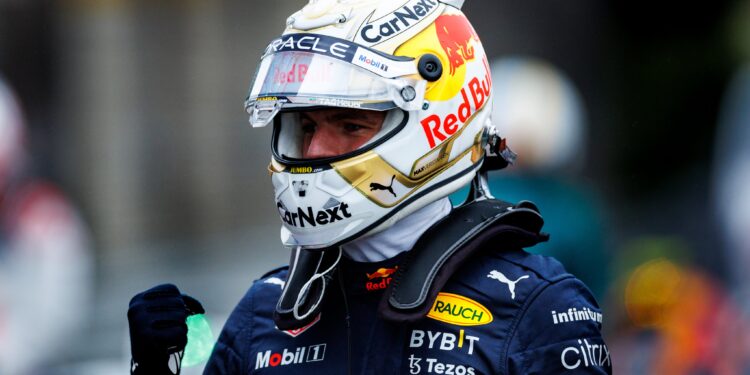 Emilia Romagna Grand Prix – After losing out at the start, Max Verstappen regained his spot on the penultimate lap to beat Charles Leclerc in the Sprint.

With a free tyre choice for the 21 lap Sprint, the soft compound was the preference for most and there were only three drivers – Kevin Magnussen in P4, his teammate Mick Schumacher in P12 and Nicholas Latifi in P18 – who had put their money on the yellow-ringed mediums.

Fernando Alonso, in P5, had a slow getaway from the grid at the start of the formation lap, but the Alpine did get going before all the other cars had passed him so there was no issues with that.

The first Sprint of the season saw Max Verstappen starting in P1 ahead of the one of the crowd-favourites for the weekend, Charles Leclerc. The crowd were given a great reason to cheer at the very start as Verstappen didn’t have a very good getaway and Leclerc’s Ferrari sailed into the lead. It was nearly double-trouble for the Red Bull driver as McLaren of Lando Norris went side-by-side with him and almost made up a place.

It will have been a relief for McLaren as they had a nightmare of a practice session earlier today, having to deal with brake issues on Norris’ car, which saw him only manage to complete very few laps, while Daniel Ricciardo was stuck in the garage the whole time with other issues.

The race was neutralised before the end of lap one as Zhou Guanyu clashed with Pierre Gasly, the Alfa Romeo’s day ending in the barrier while the AlphaTauri had to pit as his front right wheel was damaged.

The Sprint was back underway as lap five started and it was a good restart for the leading Ferrari, leaving him unchallenged and able to pull a second of a gap over the course of the first lap back racing. The second Ferrari, in P8, didn’t have as successful a restart, Carlos Sainz almost making it past Alonso after the two-time champion got out of shape. A couple of laps later though and the Ferrari was past the Alpine with a non-DRS pass.

Not too long after that, there was a change in the top 5 as Sergio Perez breezed past Haas’ Magnussen for P4. The Red Bull driver then made short work of catching up to and passing Norris, to snatch the final podium spot.

After such a great qualifying in the damp conditions yesterday, Magnussen knew that they wouldn’t be as competitive in the dry and that played out as he expected. By lap 12, the Haas dropped to P7, with Alonso on his tail, after first Ricciardo and then Sainz slid past the Dane. Ricciardo’s own hold on P5 wasn’t to last however as the Ferrari got past him and then started to reel in the other McLaren.

On lap 16, the were interesting happenings at both ends of the points positions. Valtteri Bottas, who missed FP2 as Alfa Romeo were swapping the chassis on his car after his quali-ending exhaust damage, got the better of Alonso and moved into the final point position. At the front, Verstappen had closed in on Leclerc as the Red Bull driver was being told his rival had some graining on his tyres.

The following few laps saw a Verstappen overtake looking almost inevitable as the Ferrari struggled, and on the penultimate lap the pole-sitter regained his position and pulled out nearly three seconds on Leclerc by the chequered flag.

Perez ended P3 and will be joined on the second row of the grid tomorrow by the second Ferrari of Sainz, who banished thoughts of his qualifying crash yesterday and put himself in a good position to fight in the race.

Row three will be an all-McLaren affair with Norris in P5 ahead of Ricciardo. Bottas will be P7 and Magnussen managed to hold on to take the final point of the day in P8. Alonso and Schumacher will occupy row five, and the German will be looking to use that position to help him score his first Formula 1 points.

George Russell finished P11, exactly where he started, but Lewis Hamilton did not have a great time of it and fell back a position from where he started and will head into the Grand Prix in P14.