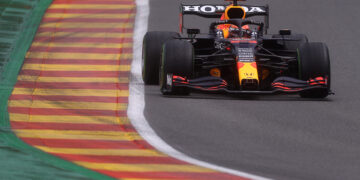 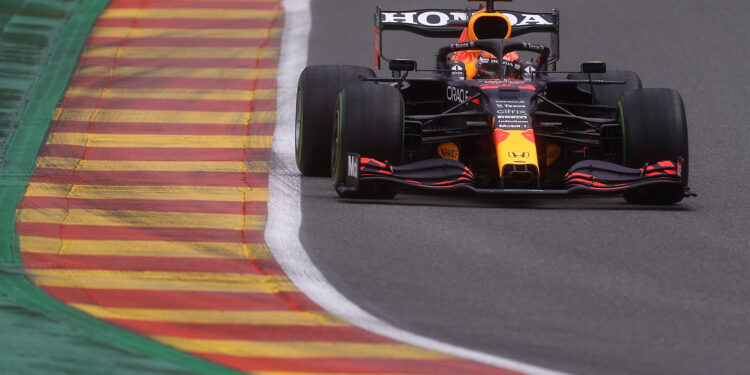 Belgian Grand Prix – Red Bull’s Max Verstappen has claimed pole position for the Belgian Grand Prix at a drenched Spa circuit which saw the start of the session delayed due to weather. The session was red flagged in Q3 due to a heavy crash from McLaren’s Lando Norris.

The Dutch driver set a time of 1:59.765 which was just three tenths faster than Williams driver George Russell. The Briton managed to hold on to a fresh pair of inters until the very end of the race and managed to sit on provisional pole for a few moments before Verstappen put his lap in.

Q1 was delayed by 12 minutes as a heavy downpour just before qualifying drenched the circuit with standing water. Once the teams were released from the pitlane, all but two cars were on the full wets.

Click here to view the full results from qualifying

The session was red flagged following a huge accident when Norris lost his car at Eau Rouge and hit the barriers. The car was heavily damaged as a result and this will be bitterly disappointing for the British driver who lead in both Q1 and Q2.

Aston Martin’s Sebastian Vettel was particularly upset by the incident who had called for the session to be red flagged minutes before due to standing water. The German even stopped by the McLaren on track to check up on Norris.

The rain held off for Q2, but the track was still nowhere near dry for slicks as drivers continued to struggle for grip. Mercedes nearly got knocked out of Q2 as the team elected to go out on used inters. The rest of the teams used fresh tyres which left the championship winning team playing catch up, but they eventually put in a time to get through to Q3

After a long delay to ensure that the track was clear of debris and standing water, Q3 resumed with nine minutes to go. All drivers but Russell went out on the intermediate tyre.

There was some consolation for McLaren as Daniel Ricciardo qualified up in fourth, just ahead of Vettel. Pierre Gasly put his AlphaTauri in sixth with Sergio Perez down in seventh, some 2.3s off his teammate.

Valtteri Bottas qualified in eighth, but the Mercedes driver will take a five-place drive penalty when he lines up for the race on Sunday. Esteban Ocon put his Alpine on ninth place, with Norris qualifying in 10th place. It is likely however that the McLaren will have to start from the pitlane, depending on damage sustained to his car.

Charles Leclerc in the Ferrari set the 11th fastest time, whilst his teammate Carlos Sainz was in 13th. A disappointing day for Ferrari who were unable to find grip on the wet track.

Nicholas Latifi qualified in 12th place which marked a good day for the Williams team. Fernando Alonso qualified in 14th for Alpine with Lance Stroll down in 15th for Aston Martin.

Antonio Giovinazzi put his Alfa Romeo in 16h place ahead of his teammate Kimi Raikkonen who was all the way down in 19th.

Yuki Tsunoda was unable to match his teammate’s pace and put his AlphaTauri in 17th place. Mick Schumacher set the 18th fastest time for Haas with his teammate Nikita Mazepin at the pack of the pack.