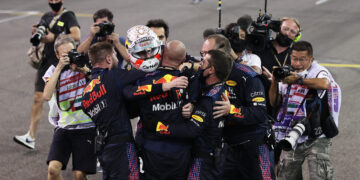 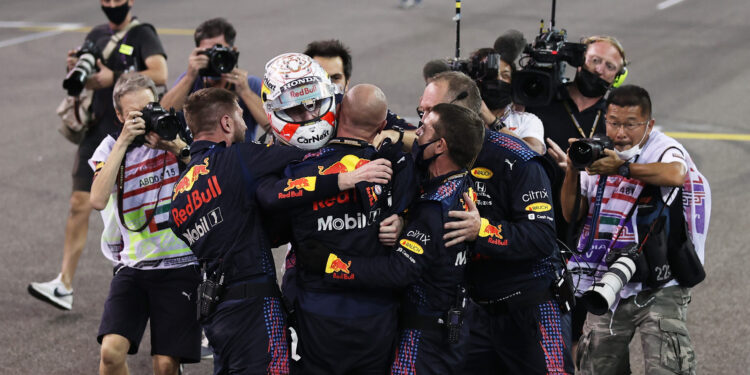 The late drama ensured that Verstappen was able to pit from second place to jump Hamilton for the lead in the dying embers of the race. The stewards allowed the lapped cars to pass the safety car just as the lights went out which left the Mercedes driver exposed to the faster Verstappen. Hamilton ended the race in second place, with Ferrari’s Carlos Sainz getting the last step on the podium.

Hamilton was able to get the jump on Verstappen into Turn 1, but on the long run down into Turn 8, Verstappen reeled in the Mercedes car and dived down the inside of Hamilton.

However, Hamilton took avoiding action and took to the runoff area and maintained his lead. There was brief controversy as Red Bull thought Hamilton gained an advantage by keeping first place, however, the stewards were happy that the Mercedes driver backed off enough.

When the pitstops came around on Lap 14, it was Verstappen who blinked first and swapped his softs for hard tyres. Hamilton followed suit which promoted Perez into the lead. The Briton started to close down the Mexican driver, but Perez didn’t make life easy for Hamilton. Some hard racing from Perez kept Hamilton behind and allowed his teammate Verstappen to close down the pair.

Hamilton managed to line up Perez on Lap 20, and, aided with DRS, breezed past the Mexican to take the lead. However Perez didn’t take it laying down and fought back to cut under and retake the lead. Hamilton tried again at the second DRS zone and managed to get in front of Perez a second time. But The Mexican retook the lead again which allowed Verstappen to close down to within two seconds of Hamilton.

Hamilton finally got past after a valiant defence from Perez, but after he pitted, Verstappen was unable to trouble Hamilton for much of the race.

On his last race of his Formula 1 career, Alfa Romeo’s Kimi Raikkonen had an issue with his brakes on Lap 26. With his rears locked up, the Finn spun into the barriers losing his front wing. Sadly, Raikkonen was unable to continue and retired into the pits.

Williams’ George Russell was also in the wars when he lost drive and had to limp back to the pits. The Briton retired from his final race with Williams before joining Mercedes next season.

Compounding a bad day for Alfa Romeo, Antonio Giovinazzi ground to a halt out on track which brought out the Virtual Safety Car. This was music to Red Bull’s ears who pit both of their cars for newer hard tyres and get much quicker pitstop under VSC conditions.

Verstappen started to run out of laps and with just 12 laps left, the gap to Hamilton started to stabilise at around 13.5 seconds. Hamilton briefly met with some backmarker traffic and the gap reduced to 12.3 seconds.

However late drama brought out the Safety Car as Nicholas Latifi Williams crashed heavily into barriers whilst trying to pass the Haas of Mick Schumacher. After running wide, the Canadian spun on dirty tyres and ploughed his rear into the barriers. Latifi was unharmed but obviously had to retire from the race.

Red Bull brought both their cars into the pits for fresh softs, whilst Mercedes kept Hamilton out on track. Whilst under the safety car, Perez had to pull into the pits to retire the car.

There was some confusion as lapped cars were allowed to pass the safety car just as the lights went out. Verstappen was then able to make a run on Hamilton on the soft tyres which left Hamilton without and answer which allowed the Dutchman to cross the line crowned 2021 world champion.

AlphaTauri’s Yuki Tsunoda finished in fourth with teammate Pierre Gasly in fifth place. Bottas ended in sixth place ahead of Norris who had to pit following a slow puncture.

Sebastian Vettel finished in 11th for Aston Martin with Daniel Ricciardo behind and out of the points for McLaren in 12th. Lance Stroll finished in 13th place, with Schumacher the last of the finishers.

Perez, Latifi, Giovinazzi, Russell, and Raikkonen were the non-finishers.