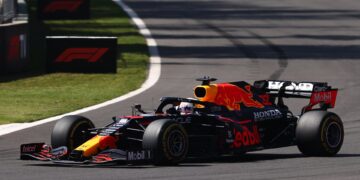 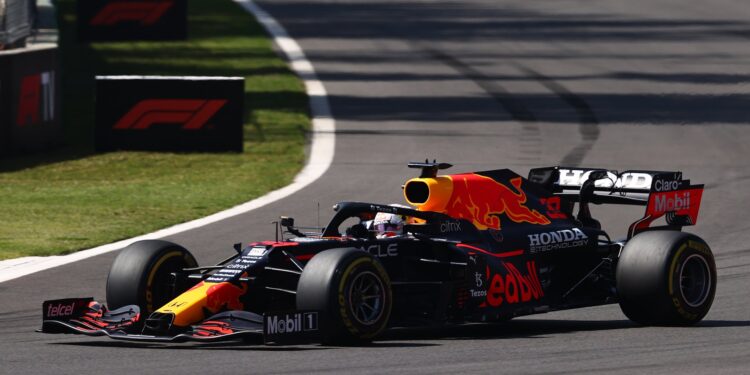 Verstappen managed to jump the Mercedes at the line, capitalising on an incident with Valtteri Bottas who was spun around at the start.

Verstappen took the lead at the start but McLaren’s Daniel Ricciardo locked up going into Turn 1 and tagged the back of Valtteri Bottas’s Mercedes. Ricciardo had to return to the pits for wing repairs with Bottas at the back of the pack.

Further behind, Alpine’s Esteban Ocon got sandwiched by AlphaTauri’s Yuki Tsunoda and Haas driver Mick Schumacher. The pair collided with the Frenchman and they pulled over at the side of the road with damage. Ocon was able to continue.

The Safety Car was immediately brought out to deal with the damage. Racing resumed four laps later and, at the restart, Verstappen extended his advantage to over a second and a half. His teammate Perez was a further second and a half behind Hamilton and he tried to attack the Briton.

By Lap 8, Verstappen was two and a half seconds clear of Hamilton behind with the Dutchman setting a new fastest lap of 1:21.520. The Red Bull was lapping two tenths a lap faster than the Mercedes behind.

The fastest sector times between the front runners kept toing and froing between Verstappen and Hamilton. However the pace advantage of the Red Bull kept him ahead by just over 3.5 seconds. On Lap 12, Verstappen set a new fastest lap of 1:20.014, two tenths faster than Hamilton’s best effort.

On Lap 13, Aston Martin’s Lance Stroll was the first to pit and swapped his medium tyres for a set of hards. McLaren’s Lando Norris, who started 18th, was up into 12th place and chasing down Williams driver George Russell.

By Lap 15, Perez had reduced the gap to Hamilton in second place to just two seconds as the Mexican set laptimes that were three tenths quicker than the Mercedes ahead. Meanwhile, further back, Bottas and Ricciardo were making steady progress through the field with the Australian and Finn driver up into 12th and 13th by Lap 17.

Verstappen upped the ante again and on Lap 19 he set a new fastest lap of a 1:20.685 to extend his advantage to Hamilton behind to 6.7 seconds.

By Lap 27, Red Bull were urging Perez to close up to Hamilton on order to try and force a pitstop. The Mexican did respond and a lap later, the Red Bull driver was 1.5 seconds behind the Mercedes.

Hamilton was the first of the front runners to blink as the Mercedes came in to the pits on Lap 28. However it was disaster for the Briton who rejoined the race behind Leclerc in fourth place. Leclerc would pit a lap later, but by then Hamilton had already lost time and was 33 seconds behind the leader.

Hamilton responded and pumped in the fastest lap of the race with a 1:19.953. It looked to be just enough for the Mercedes driver to stay ahead of second place man Perez. Strangely, Red Bull didn’t respond and stayed out on track.

AlphaTauri’s Pierre Gasly, who was running up in third place, came into the pits on Lap 31 and rejoined the race in seventh place.

Verstappen eventually pit on Lap 32 promoting home hero Perez into the lead. The Red Bull driver came out in second place, some seven and half seconds clear of Hamilton in third place. Perez ahead didn’t pit and tried to extend his advantage over the drivers behind. The Mexican set a new personal best laptime, but was still 15 seconds ahead of Hamilton.

By Lap 39, Verstappen had extended his advantage over Hamilton behind to nine seconds. Perez came into the pits a lap later to come out behind the Mercedes on a fresh set of hard tyres.

Bottas came into the pits on Lap 41 to cover off Ricciardo who stopped a lap earlier. However, there was a problem with the front left tyre stopping for 11.7 seconds. The Finn rejoined the race down in 15th place.

On Lap 42, Perez set the timesheets alight with a new fastest lap of 1:19.659 giving the Mexican a valuable point in the race for the constructors crown. The Red Bull driver set out to chase down second place from the Hamilton and reduced the gap to under nine seconds.

On Lap 44, Norris was the last of the drivers to pit and came in for fresh hard tyres. The Briton rejoined out in 10th place some seven seconds adrift of Alonso.

Perez continued his charge on Hamilton and reduced the gap to the Mercedes by just 5.7 seconds. With fresher tyres, the Red Bull driver was able to close down Hamilton.

By lap 57, the gap between Hamilton and Perez was down to 1.6 seconds as Hamilton struggled with his tyres.

With ten laps to go, Perez closed within a second and got the benefit of DRS assistance. However the Mexican was unable to get close enough to make a move and dropped back 1.3 seconds in the dirty air.

Perez started to run out of opportunities as the Mexican dropped back further, and Hamilton was awarded with a 2.1 second buffer over the Red Bull.

With a handful of laps remaining, the battle for second place was ready for round two with Perez getting within DRS distance of the Mercedes. The Red Bull had a few cool down laps in order to recharge his batteries and cool the tyres.

Bottas was called into the pits on Lap 69 for fastest lap and he was briefly held to ensure he had clean space.

But Perez was unable to get close enough to make a move with Verstappen crossing the line to take victory, ahead of Hamilton and Perez.

Gasly finished in fourth pace with the two Ferraris of Leclerc and Sainz in fifth and sixth. Sebastian Vettel scored some good points for Aston Martin in seventh place ahead of Kimi Rakkonen in the Alfa Romeo.

Fernando Alonso finished in ninth for Alpine ahead of Norris in tenth. Antonio Giovinazzi finished in 11th place with Ricciardo in 12th.

Ocon finished in 13th place ahead of Stroll in 14th. Bottas finished in 15th place despite scoring the fastest lap. The Williams pair of Russell and Latifi finished in 16th and 17th with Mazepin the last of the finishers.

Schumacher and Tsunoda were the only retirements.