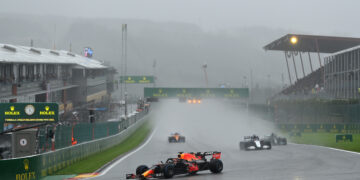 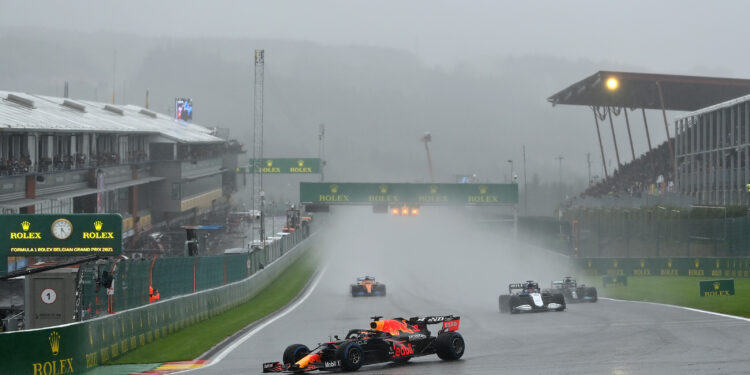 The race was initially due to start at 15:00 but was delayed by 25 minutes due to a torrent of wet weather before the start of the Grand Prix. The start procedure then allowed the cars to get underway behind the safety car with two formation laps. Whilst a rolling start was planned, conditions proved too unsafe to run racing laps, so the race was red flagged and the race procedure suspended.

There was a lengthy stop as the stewards waited for the rain to ease, but the wet weather didn’t relent. A three hour countdown which would’ve ended the race early had to be overruled by the stewards via the International Sporting Code citing Force Majeure. This allowed the stewards time to find a clear spot in the weather.

There was a period where the rain eased at 18:17 local time as the cars were sent out behind the safety car. But after just two laps, the red flags were shown again due to poor conditions and visibility.

Two racing laps was enough to declare a result with half points awarded for the finishing positions. Race winner Verstappen has scored 12.5 points, with Williams’ George Russell finishing second  with 9 points, and Mercedes’ Lewis Hamilton in third with 7.5 points.

There was drama at the start of the race which saw Red Bull’s Sergio Perez crash on the installation lap on the way to the grid. The Mexican suffered damage to his RBR16B and the team did initially declared the car too damaged to continue. However, the stoppages proved a saving grace as the car was able to be repaired. The stewards allowed Perez to start from the pitlane, but due to the nature of the race, the Mexican is classified last.

McLaren’s Daniel Ricciardo was classified in fourth place ahead of Sebastian Vettel in the Aston Martin. Pierre Gasly was classified in sixth in the AlphaTauri with Hungarian GP winner Esteban Ocon in seventh for Alpine.

Ferrari’s Charles Leclerc was classified in eighth ahead of Williams Nicholas Latifi and the other Ferrari of Carlos Sainz.