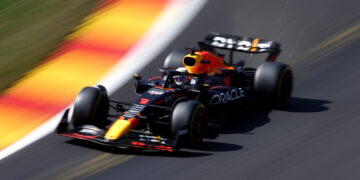 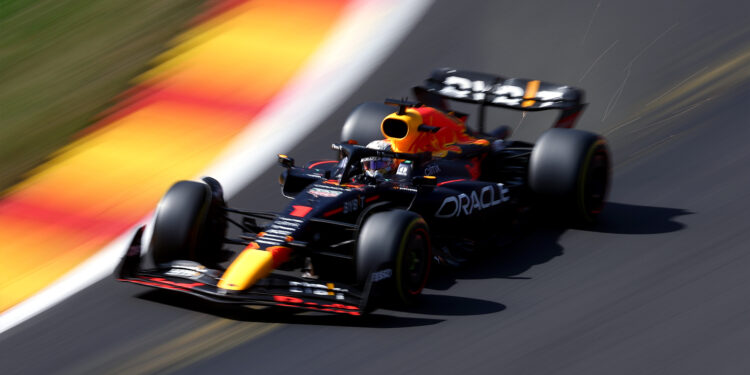 With six drivers, four of those who had qualified in the top 10, having back of the grid penalties and another car being required to start from the pits the grid looks very different to qualifying results yesterday.

Carlos Sainz will be starting from pole position with Sergio Perez alongside him after Max Verstappen’s penalty dropped him back from a very comfortable P1 in qualifying to P14 for the start.

There will be an empty spot on the grid as an electrical problem for Pierre Gasly in the build up meant the team had to start him from the pit lane alongside his teammate Yuki Tsunoda, who changed power unit parts in parc ferme.

Medium tyres were the choice for the majority of the pack however polesitter Carlos Sainz as well as Valtteri Bottas P13, Max Verstappen P14 and Charles Leclerc P15 all decided on softs while the lone hard tyre runner was Tsunoda.

While it was a solid start for Sainz, Perez had much more trouble losing positions to Fernando Alonso and both Mercedes cars before the first corner. Before the end of the lap though the Mexican had recovered to P2 when Alonso and Lewis Hamilton made contact as the seven-time champion tried to overtake, closing the door too much on the Alpine racer and their wheels connected. Mercedes then radioed Hamilton telling him to stop on track as a result of the damage. The stewards decided that it was a “first lap incident” so there would be no penalties handed out for the clash.

The yellow flags were brought out but before the stricken Mercedes was recovered there was another on-track incident, as Nicholas Latifi went wide and got his wheels onto the gravel which spun him around. Esteban Ocon managed to take avoiding action but no luck for birthday boy Bottas however, who got a tap and that was enough to put him into the gravel ending his day.

The Safety Car was called and during that time there was some drama for Leclerc, who saw some smoke coming from his front right tyre. He headed to the pits and after Ferrari swapped him to mediums they let the Monegasque know that a tear-off in the brake cooling which was the cause of the issue. That saw Leclerc drop from P9 to be the penultimate car on track in P17.

The race resumed on lap 5 and it was not an ideal restart for Sainz who locked up at the final corner just as he was trying to get the race back underway. The Ferrari driver got away with it though and held his position from those behind.

Verstappen, who was P8 behind the Safety Car, picked off Alex Albon and Daniel Ricciardo on the first lap back racing as he closed ever closer in on the podium positions. Sebastian Vettel and Alonso followed over the next few minutes before, on lap 8, Verstappen breezed past the sole remaining Mercedes of George Russell, to take the final podium spot.

It was all change at the front on lap 12, first as Sainz pitted to swap to the mediums, rejoining in P6 right behind Ricciardo though he managed to get past the McLaren on his outlap. Perez briefly took the lead before Verstappen took the position from his teammate and continued to charge off into the distance, pulling over three seconds of a gap over the following couple of laps.

Perez made his stop on lap 15 rejoining in P3, eight seconds behind Sainz, while Verstappen got rid of his well-used soft tyres on the following lap, giving the lead back to Ferrari as the Dutchman made it back to the circuit a second ahead of his teammate.

There was a lot of action on track then, lap 18 saw Verstappen breeze past Sainz for the lead, much to the delight of the army of orange-clad fans around the track. Behind them Russell had demoted Leclerc, who was on much older tyres, back to P5 while Schumacehr took P17 from Latifi as they went up through Eau Rouge.

Lap 21 and it was back to a Red Bull 1-2 as there was no fighting a Red Bull with DRS this weekend, Sainz was demoted to P3 with Russell steadily closing in on him.

Both Ferraris ducked into the pits on lap 26, Sainz rejoining 14 seconds behind Russell with hard tyres on while Leclerc lost positions to Vettel and Ocon, slotting into P7 with a fresh set of mediums. Two laps later, Perez followed Sainz’ lead and switched to the hards, that let Russell take over P2 at that point, Verstappen with a 22 second gap to those behind.

Lap 30 and Russell made his move to the hards, dropping back to P4 with eight seconds to make up to Sainz, now back on for a podium. The last of the leaders to pit was Verstappen himself, the Dutchman taking another set of yellow-ringed mediums, and emerging back in the lead, still well ahead of Perez in P2.

There was a three-wide situation on the Kemmel Straight with Gasly overtaking Vettel on the inside for P7 but as he did, Ocon took to the outside and got past the two of them, jumping his Alpine from P9 to P7. Vettel did get back past Gasly pretty quickly but Ocon had managed to pull a bit of a gap to the Aston Martin.

WIth five laps to go, Russell had closed to within two seconds of Sainz but the Mercedes wasn’t closing as quickly as he had initially been, so there was slightly less pressure on the Ferrari driver than it had looked like there would be a few laps previously.

On the penultimate lap, Leclerc ducked into the pits to swap to soft tyres and attempt to take the fastest lap from Verstappen. The Monegasque rejoining just ahead of Alonso but the Spaniard took his chance to demote the scarlet car but Leclerc did get back ahead and while he did do a personal best time on the final lap, it was still over 0.6 seconds slower than Verstappen’s earlier effort.

After the chequered flag a message appeared from the stewards saying that Leclerc was being investigated for potentially speeding in the pit lane. A couple of minutes later the Ferrari driver was handed a 5 second time penalty which dropped him back to P6, behind Alonso.

Verstappen took the win almost 18 seconds ahead of Perez while Sainz took the final step on the podium without having to fight off Russell whose earlier pace petered off in the last few laps.

Alonso was P5 thanks to Leclerc’s penalty while Ocon made it double points for the team with a P7. Vettel was P8 for Aston Martin with Gasly in P9 while Albon, after a very strong weekend in Spa, took home the final point for Williams.