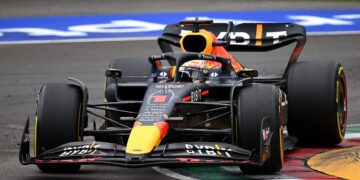 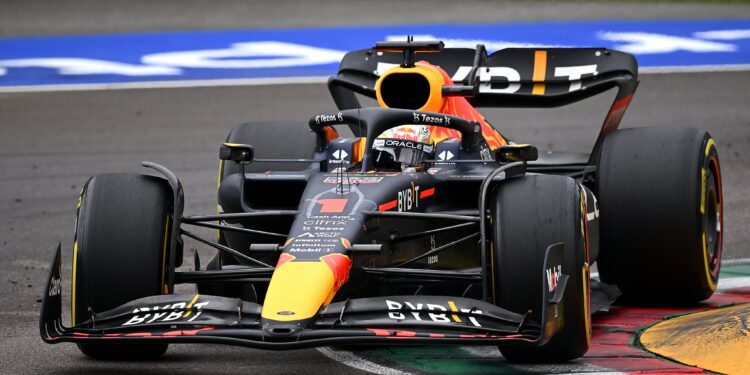 Emilia Romagna Grand Prix – Max Verstappen had a “very lovely Sunday” as he breezed to an easy win ahead of Perez while a Leclerc error dropped him from P3.

There was a bit of pre-race worry for Lewis Hamilton who reported that his engine wasn’t running smoothly as he drove to the grid, he was later reassured that his mechanics would look into it and that they were pretty confident it was a laps-to-grid issue and would be fine for the race.

There had been rain earlier in the day but it had stopped by the time the cars got to the grid and so it was intermediate tyres all round as the nineteen drivers lined up for the start of the race with Max Verstappen and Charles Leclerc on the front row with their teammates lining up on the row behind. Nicholas Latifi was alone on the back row as Zhou Guanyu had been ordered to start from the pits as Alfa Romeo broke parc ferme and made unsupervised repairs to the car.

As the lights went out it was a much better start than yesterday for Verstappen, the Red Bull driver holding his lead, it was quite the opposite story for Ferrari however. Neither of their cars got away well, Leclerc lost out to both Sergio Perez and Lando Norris while that was not ideal, things were even worse for Carlos Sainz. After a great Sprint to get himself back to the front, the Spaniard got hit by Daniel Ricciardo which spun him into the gravel. The Ferrari was beached and out of the race while Ricciardo was able to continue, though he was well behind the rest of the pack after a trip to the pits.

Just like yesterday, the Safety Car was called out before the end of the opening lap and the race only got back underway on lap 5. Aside from the drama at the front, George Russell had made a very good start jumping his Mercedes up from P11 to P6 in the first few corners.

It was not a great race for Spanish drivers as Fernando Alonso had to retire on lap 7 after the rear part of his right sidepod flew off as he was being passed by Hamilton for P11. It was later shown that the Alpine had gotten hit by Mick Schumacher as the Haas driver spun on the opening lap.

There was finally something for the tifosi to cheer about on lap 8 when Leclerc slid down the inside of Norris to put Ferrari back into the podium spots though he did have a good few seconds to make if he wanted to fight Perez or Verstappen ahead of him.

The fight for P5 and P6 was one of the early highlights of the race with Kevin Magnussen and Russell with the position changing hands a few times before the Mercedes made it stick. The Haas driver then had to contend with Valtteri Bottas but wasn’t able to hold the Finn back for long and Magnussen fell to P7.

Lap 17 and Daniel Ricciardo decided to gamble on slick tyres, he was last on the track and so there was nothing to lose by putting on the mediums. Sebastian Vettel in P8 and a few of the others in the lower positions then followed suit but it was P2 driver, Perez, who was the first of the top runners to make the switch.

Pitlane chaos followed, with Bottas having a dreadful stop which dropped him off the back of Russell but he kept P6, Alpine were then investigated after they released Esteban Ocon into the path of Hamilton, there was contact between the two in the pitlane and the Frenchman was handed a five second time penalty.

By lap 20 the whole field was on the yellow-walled mediums and, while Leclerc had emerged in front of Perez, the Red Bull driver had got his tyres into working range and was able to get past without too much trouble, so the only change the stuck in the top ten was P7/P8, Vettel’s slightly earlier stop moving him ahead of Magnussen. Though the biggest loser in that time was Hamilton, who ended the first round of stops back where he’d started the race, in P14.

After fifteen laps on the mediums Ricciardo, who had moved up to P15, pitted to swap to the hard compound and dropped himself back to P18 and last again.

At the end of lap 34 and DRS was enabled for the first time in the Grand Prix though there were only three drivers who were in a position to activate it then – Gasly and Hamilton in P13 and P14, and Zhou in P16 – none of them managing to use it to their advantage and progress however.

The start of lap 41 capped off Hamilton’s awful weekend as he was lapped by the race leader and his main rival from last season, Verstappen. There wasn’t even a silver lining for the seven time champion as he wasn’t able to follow the Red Bull and use the leader to overtake the AlphaTauri in front. While there were multiple occasions that it looked like Hamilton was going to get the move done, Gasly was just able to brake a bit later and hold on in P13.

With thirteen laps to go, third placed Leclerc pitted to swap to the soft tyres. He initially lost the position to Norris but his much newer tyres allowed him to regain not too long later. As they both had enough time in hand, Perez and Verstappen also switched to the softs but Leclerc was flying on the red-ringed compound, though the Monegasque felt the mediums would have been the better choice. He closed up to Perez, putting in fastest lap after fastest lap but couldn’t put himself into a position to challenge for P2 and tried too hard.

The Ferrari driver took too much kerb, launching the car which spun him into barriers, he was able to continue but had to pit for a new front wing and tyres. Leclerc rejoined the race in P9, gifting the final podium place to Norris and breaking the hearts of the crowd.

On fresher tyres the Ferrari driver was able to regain some positions and make it to P6 by the chequered flag. At the front though Verstappen continued his DNF or P1 streak, as he took the victory he told his team “that was a very lovely Sunday”. He was joined by his teammate for Red Bull’s first double podium of the season.

Norris was understandably delighted to luck into his first podium since Formula 1 was last in Italy. Russell continued his very consistent run of results for Mercedes taking another P4 for the German marque.

Bottas took Alfa Romeo’s best result of their very competitive season so far with a P5, ahead of the recovering Leclerc. Yuki Tsunoda was the best of the AlphaTauri drivers this weekend, taking P7 while his teammate, Gasly, was P12 after having held Hamilton off since the swap to slick tyres.

There was relief for Aston Martin as they not only took their first points of the season but managed to get both drivers into the top ten, Vettel in P8 while Stroll was P10. The two were split by Magnussen who scored his third points finish of the year for Haas.