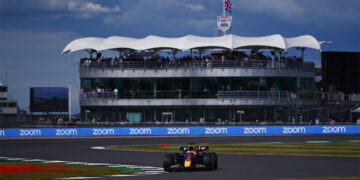 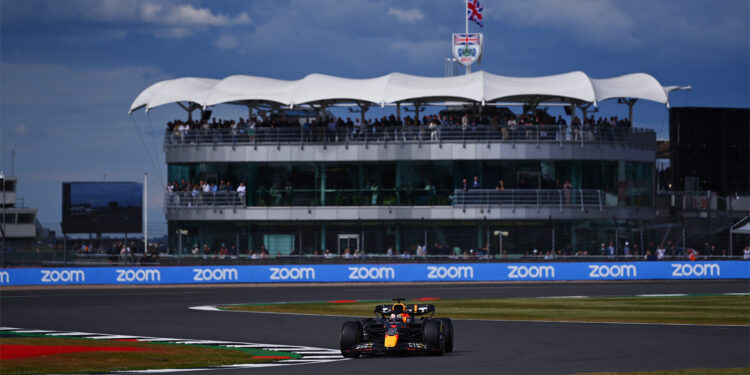 British Grand Prix – Max Verstappen was the only driver into the 1:27s as he ended the session four tenths ahead of Sergio Perez and Charles Leclerc.

Lance Stroll was the first to take to the gusty, overcast Silverstone track as the final hour of practice got underway. The Aston Martin drivers returned to the pits at the end of their outlap so it was Fernando Alonso who set the first time of the session, a 1:34.826.

After the opening ten minutes only eight drivers had set times – the Ferraris, Alfa Romeos, McLarens and Alpines – with Charles Leclerc’s 1:29.452 leading the way, while neither Max Verstappen, Lewis Hamilton or either Williams car had emerged from the pits.

Verstappen was the last to make his way to the track, waiting until more than fifteen minutes had elapsed before heading out and then going fastest in every sector on his first attempt to go almost half a second faster than anyone else with a 1:28.541.

Mercedes have been having a much improved time of it so far this weekend, Lewis Hamilton ending both practices yesterday in P2 and both drivers had been setting strong times keeping them in the mix during the first half of the session with Hamilton slotting into P2, two tenths behind Verstappen while George Russell was P5 and also reporting back that he wasn’t experiencing any bouncing, later in the session however Hamilton was reporting the opposite on his car.

Also at the half-way point, there were strong showings from Zhou Guanyu and Mick Schumacher who were sitting in P9 and P10, both a few positions ahead of their teammates but it wasn’t looking as positive for the McLarens who were in P17 and P18.

With just over twenty minutes to go there were reports of a few spits of rain on track but they didn’t herald anything stronger and the session remained dry allowing the drivers to continue setting laps. Heading into the final ten minutes, the two Red Bulls were at the top of the times and Lando Norris had made it up to P7, just behind Carlos Sainz.

The session came to an end without any warning flags being shown during it and it was Verstappen’s 1:27.901 at the top of the times with Perez 0.410 seconds behind in P2. Leclerc was a further few hundredths back and ahead of the Mercedes duo of Russell and Hamilton, who were both just over half a second off the Red Bull’s effort.

Sainz ended the third practice in P6, while Norris was the first driver outside a second of Verstappen with a 1:29.102. Valtteri Bottas took P8 for Alfa Romeo with Schumacher remaining as the best of the Haas drivers as Kevin Magnussen struggle with the set up on his car. The final spot in the top ten went to Alonso, who was one hundredth slower than Schumacher with a 1:29.520.