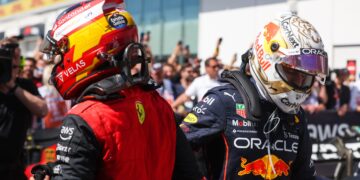 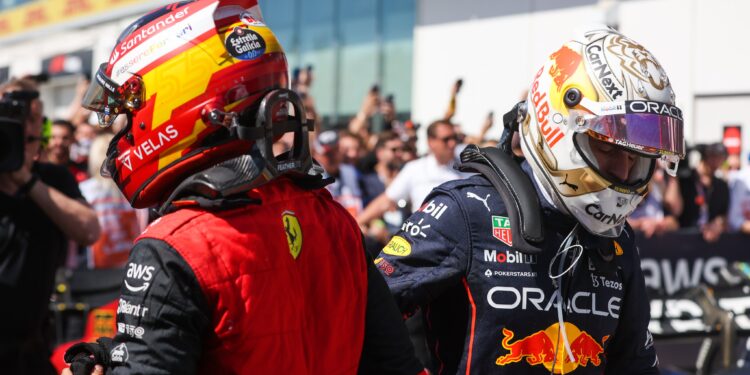 Belgian Grand Prix – Max Verstappen might have been the quickest in the top ten shootout but penalties for him mean that Carlos Sainz will start on pole.

There was a 25 minute delay to the start of qualifying to allow some barrier repair work to be completed after a crash in the Porsche Supercup race. It was a cool, overcast but still dry circuit that greeted Nicholas Latifi’s Williams as he was the first to take to the track when the session finally got underway. The Canadian had headed out on the medium tyre but returned to the pits at the end of the out lap to switch to the softs, the tyre of choice for everyone else.

The first time on the board was a 1:47.929 from Mick Schumacher but it was Max Verstappen leading the way as the first round of times came in, the reigning champion setting a 1:44.581, over four and a half tenths faster than Carlos Sainz in P2.

The track then went silent as the cars retreated to the garages before the final runs and it was once again Latifi who led the way back out onto the circuit. The top four, the Red Bulls and Ferraris, all remained in the pits, confident that their first efforts would see them through to Q2.

That confidence was well-founded as there was no change to the first four places but behind that it was all change with the standout being Alexander Albon who split the two Mercedes cars by putting his Williams into P6.

There was disappointment for Sebastian Vettel however as he missed out on progressing after setting a lap just 0.002 seconds slower than Schumacher. The Aston Martin driver was joined at the back by Latifi, Kevin Magnussen, Yuki Tsunoda and Valtteri Bottas.

Lewis Hamilton led his teammate out at the start of Q2, the seven-time champion setting an opening effort of 1:46.622 but once again it was Verstappen blowing them all away with a 1:44.723, this time with Sergio Perez in P2, as the only other car in the 1:44s.

It wasn’t the best of laps for Charles Leclerc, his car sliding all over the place and even with some slipstream from Sainz, he could only manage P6, just over nine tenths off Verstappen.

Heading into the final runs it was Albon, Zhou Guanyu, Lance Stroll, Schumacher and Daniel Ricciardo who were in the elimination positions with the McLaren racer not having set a time by that point. The top two, the Red Bulls, remained in the pits while the others headed back out for the final minutes Q2.

With grid penalties waiting for Esteban Ocon and Lando Norris, the two were cast into the dutiful teammate roles as they headed out ahead of Fernando Alonso and Ricciardo respectively, to try to give their teammates a tow and help them into Q3. While Ocon and Alonso ended P7 and P8, the two didn’t work out so well for McLaren with Norris in P9 while Ricciardo was P11 after another great lap from Albon saw him through to Q3 in P10.

Leclerc put in a great lap to go P1 with a 1:44.551 but a mistake at the first corner saw Schumacher fail to set a proper final lap and so the Haas driver ended P15 with Ricciardo, Pierre Gasly, Zhou, and Stroll ahead of him.

Albon was first out as the top ten shootout got underway and opened the bidding with a 1:46.369. But, once again, it was Verstappen leading the way with a 1:43.665. There was some drama with Ferrari however as they sent Leclerc, who will be starting at the back thanks to a whole host of parts changes, out on fresh soft tyres. The Monegasque went out a lap after the others to give his teammate a tow which is not something that required a new set of tyres to do.

Verstappen and Norris, with penalties to serve, decided to remain in the pits while Leclerc once again headed out to provide a slipstream for Sainz but it was a scuffy lap for the Spaniard however that didn’t matter as Perez failed to improve either, so the Ferrari will be on pole once penalties are applied.

Leclerc ended qualifying in P4 with the two Alpines of Ocon and Alonso behind him. Hamilton was the faster of the Mercedes drivers so he ended the session in P7 to Russell’s P8. Albon was P9 for Williams while Norris was P10.

While the back of the grid order of those with penalties is still to be seen, the top ten for the race tomorrow should be Sainz and Perez on row 1, Alonso and Hamilton on row 2, Russell and Albon sharing row 3, Ricciardo and Gasly on row 4, with an all-Aston row 5 with Stroll ahead of Vettel.