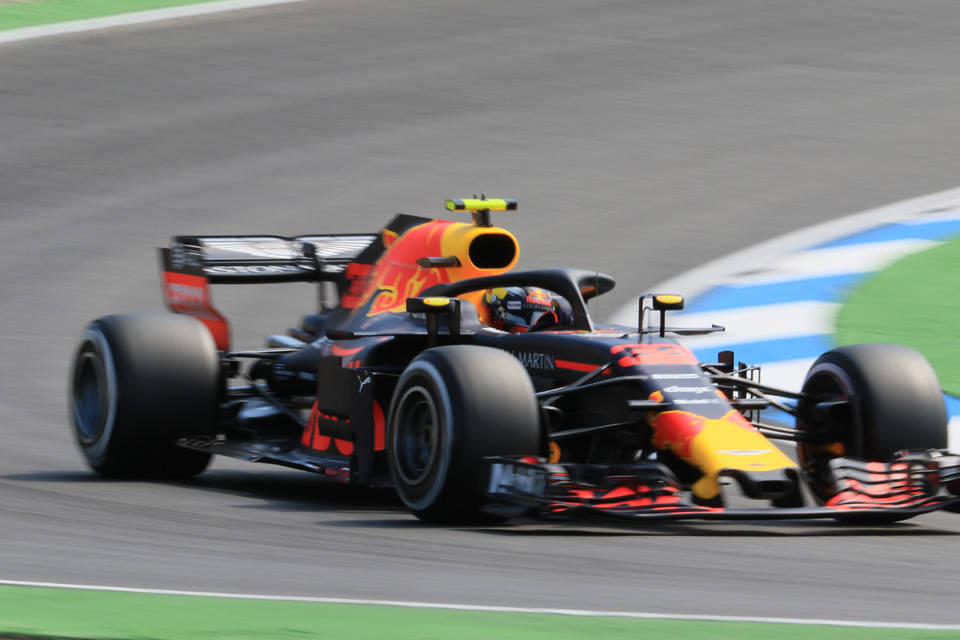 Verstappen went to the top of the timesheets with a 1:13.356 on the second hot lap of a soft tyre run, having gone third on his previous lap after setting the fastest first and third sectors but losing three tenths in the middle sector.

He usurped Sebastian Vettel’s 1:13.817, set on mediums, which was 0.098 seconds quicker than team-mate Kimi Raikkonen on the softs.

Valtteri Bottas went second by 0.3 seconds to the Red Bull driver, also on softs, but only 0.047 seconds ahead of Hamilton on mediums.

Vettel was the first to switch to the ultrasoft tyre for a qualifying sim, beating Verstappen’s time by 0.046 seconds on a 1:13.310, while Raikkonen went third 0.117 seconds away from Verstappen’s soft tyre time.

Bottas set the fastest final sector to set a new track record on a 1:13.190, but was quickly toppled by Hamilton by 0.079 seconds despite going wide on the exit of Turn 1. He was beaten by the even narrower margin of 0.026 seconds by Verstappen who set a 1:13.085.

Verstappen, however, sat out approximately 30 minutes of the session, missing the majority of the long runs, after reporting an issue with his downshifts. He managed to get back on track with a handful of minutes remaining.

His team-mate Daniel Ricciardo, who was 13th fastest in the session, focused on long runs as he will start from the back of the grid after taking on a new MGU-K, control electronics and energy store.

Romain Grosjean continued to lead his Haas team-mate Kevin Magnussen in sixth and seventh respectively ahead of Charles Leclerc and Nico Hulkenberg.

Esteban Ocon took over from Nicholas Latifi at Force India and was 10th fastest, 1.423 seconds off Verstappen’s pace and 0.044 seconds ahead of team-mate Sergio Perez.

Fernando Alonso was 17th, 1.751 seconds off the pace, ahead of the two Williams of Lance Stroll and Sergey Sirotkin, who had a near-miss with Ricciardo at the Turn 6 hairpin. The Red Bull was closely following Sirotkin who went wide and seemed to invite Ricciardo to pass before cutting across his nose.

Sirotkin ran off the circuit later in the session after locking up at the Sachskurve and running through the gravel.

Stoffel Vandoorne was last in the McLaren, 2.369 seconds off the pace.