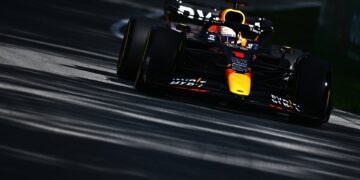 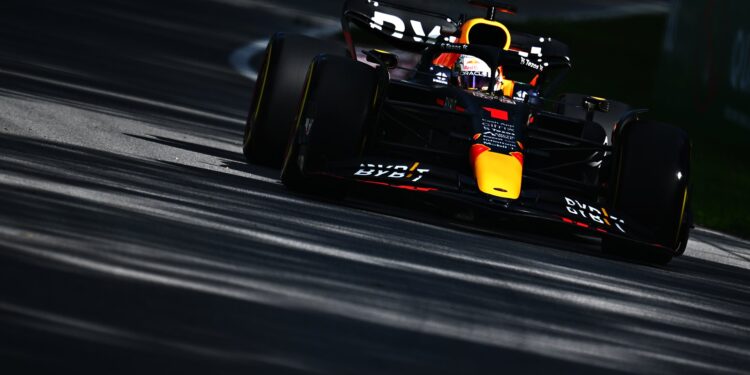 Canadian Grand Prix – As he did in FP1, Max Verstappen topped the second practice in Montreal this time with both of the Ferraris right behind him.

The second practice of the day started with less of a threat of rain but cars were still quick to head out onto the Canadian circuit. Once the lap times started coming it was once again Red Bull leading the way with Max Verstappen setting a 1:15.618. The Mercedes cars were the last to leave the pits, both cars having work completed though George Russell made it out before the ten minute mark while Lewis Hamilton followed a few minutes later.

Valtteri Bottas had been one of the first out but an electrical issue saw him back in the garage at the end of his outlap. The Alfa Romeo team had him back out after a few minutes but the Finn was back sitting at the back of his garage after an anti-stall issue on that outlap. Just before the half hour mark he attempted another outlap but had issues with his down shifts and it was back to the pits once again, and that was where he would remain for the rest of the session.

With the FIA stating that they would be stepping in to resolve the porpoising issue, Russell and Carlos Sainz were experiencing very tooth-rattling rides. That didn’t stop them from getting into the 1:14s however and at the halfway point the two were sitting P3 and P4, the Spaniard over half a second clear of the Mercedes while Charles Leclerc was P2, less than a tenth slower than Verstappen’s 1:14.127.

With twenty-five minutes of running left, Sebastian Vettel had Aston Martin in a strong P4, only 0.315 seconds off the best time but the German had to head to the pits after feeling something loose around his feet.

The second half of the session was mainly focused on long runs but at that point the dark clouds, which had dispersed after the start of FP1, made their reappearance. While the downpour wasn’t expended until ten minutes after the end of the session teams did believe that it could start getting a little damp before the chequered flag, they were wrong this time though and the session ended as dry as it started.

Leclerc ended P2 ahead of Sainz while Vettel’s time hadn’t been beaten so he was P4. Fernando Alonso, who was P3 in the opening session of the day, continued his strong pace ending in P5 with a 1:14.543.

AlphaTauri’s Pierre Gasly took the flag in P6, 0.752 seconds off Verstappen’s time while Russell’s 1:14.971 saw him P7. The two McLarens were P8 and P9, Lando Norris half a tenth quicker than Daniel Ricciardo, while Esteban Ocon gave Alpine both cars in the top ten and was the last to set a time within a second of the leader.

The stewards will be having a few chats with Vettel after the session as he will be investigated for an unsafe release where he headed out into the path of Kevin Magnussen at the start of the practice hour, and then also for failing to follow the race director’s instructions at T14 during it, the second being an offence that his teammate Lance Stroll will also have to account for.