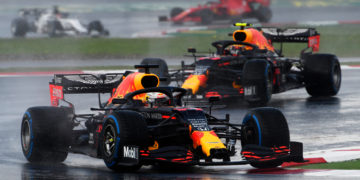 Verstappen frustrated: “It just was not meant to be”

Verstappen frustrated: “It just was not meant to be” 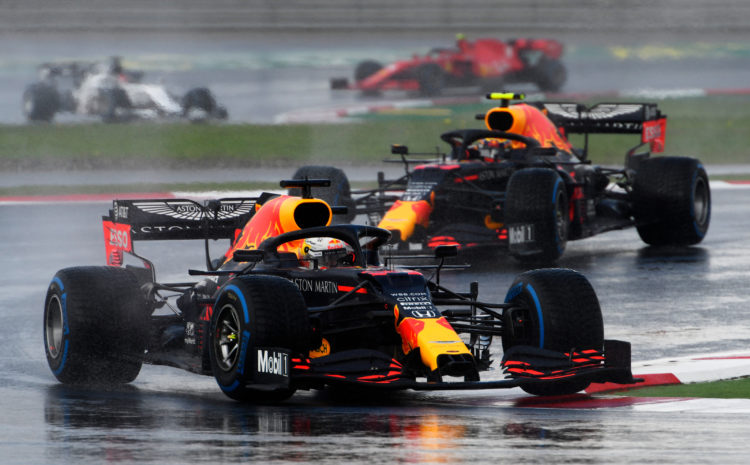 Turkish Grand Prix – Max Verstappen was left frustrated with a P6 finish after an incident-filled race, after starting from the front row.

Verstappen had a tumultuous race in Turkey. Having started from the front row, he bogged down off the line and lost several positions to fall back into the pack. Spending the early stages of the race recovering these positions, Verstappen switched to the Intermediates from the full Wets. This pitstop allowed him to undercut Ferrari’s Sebastian Vettel and he started applying the pressure on Sergio Perez for P2 as the Dutch driver was one of the quickest drivers on the track.

However, Verstappen ended up pinching himself into the kink on the back straight and had to take a more extreme line than optimal – this forced him out wide into the escape area. With grip virtually non-existent on the green paint, Verstappen lost control and spun helplessly down the track – fortunately avoiding hitting anything.

From there, Verstappen pitted again and had a few minor off-track incidents before another late spin while shadowing teammate Alex Albon. He quickly caught back up and passed Albon, ending up in P6 at the chequered flag.

“Today was just a very difficult race to be honest.” said a frustrated Verstappen afterwards. “The start was not great and I dropped back to fourth with the lack of grip on the dirty side of the grid. I got back up to third and tried to follow Checo through the kink but washed out massively which put me onto the green on the exit kerb and I had a big spin. I tried to keep it out of the wall but flat spotted my tyres and needed to pit.”

Having made the critical error that put him back into the pack, Verstappen explained that he simply couldn’t find a way past anyone in the second half of the race.

“With fresh tyres of course you very quickly catch up with the guys in front but then you can’t pass.” Verstappen explained. “There’s just one line around here and already that line is very slippery and you just have to do the same line as the person ahead which is very frustrating. Also, the fact that the track wasn’t really drying meant we couldn’t switch to slicks so we had to stay on intermediates which just get destroyed pretty quickly. It was a complicated race with a mixture of just following the car ahead, having no grip and trying to survive! It’s not been a great day and I guess it was just not meant to be.”

Team boss Christian Horner explained: “In conditions that we felt strong in all weekend we fell short in an incredibly challenging race. Max  lost out after a very slippery getaway on extreme wet tyres, dropping back into the pack emerging fourth at the end of the first lap.”

“We were able to get the jump on Seb after the first pit stop, giving Max track position and enabling him to close up and attack Sergio. Max struggled to make a move without DRS at that stage of the race and got too close to Sergio in his wake and had a spin. We were then forced to pit him for new intermediate tyres putting him on the back foot and well down the order.”