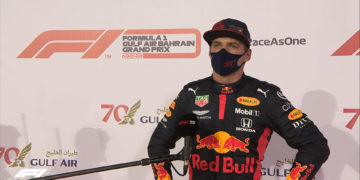 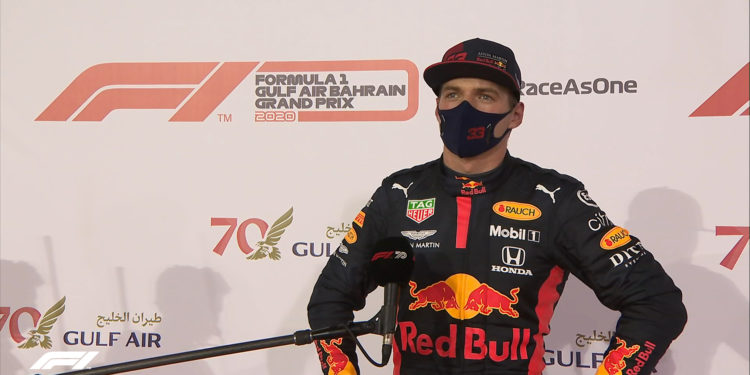 Verstappen passed Valtteri Bottas for second off the grid before the red flag and the Dutchman saw flames in his mirrors after Grosjean’s Haas burst into flame after the back was ripped off on impact with a barrier. Grosjean got himself free of the flames and is currently in hospital, where he is being treated for burns on the back of his hands.

“That was a crazy, crazy incident,” Verstappen said following the race. “It was scary because we saw a red flag, it doesn’t mean that it’s a bad thing, but I saw a lot of fire and that’s not a good thing. Luckily he jumped out of the car himself and that was the most important. You can really see the safety, how much it has improved and I think the halo today saved his life.

“In the beginning when it came onto the cars I was quite critical about it, that it looked ugly. But you can’t say anything about the safety, because today it definitely saved Romain, so very happy about that. Thoughts are with him, and his family as well. I hope that he’ll recover very soon and be back with us.”

Once the race restarted after a lengthy delay to clear the track and replace the barrier, Verstappen followed Hamilton home to take second place  for the sixth time this season. The Dutchman wasn’t overly happy with the strategy his team decided on for the day, saying they had the tyre options to put pressure on the Mercedes driver but opted for an conservative approach instead.

“We didn’t do a good job with the strategy today. We had the tyres to be more aggressive but we didn’t do it. First stop we should’ve pulled Lewis in instead of Lewis pulling me in, so I don’t know what was going on there. I had the hard tyre after that first stop and I think it was the right tyre to be on. Initially I gained a bit back from Lewis because he was bringing his tyre up to temperature a bit slower, and with the harder compound you can push a bit harder on them initially.

“Then my second stop wasn’t good, I don’t know what happened there, so then you’re even further behind. We were always like four seconds behind and whatever we did wrong today I think that’s just very costly. I don’t think we had the better pace but we could’ve done a better job putting them more under pressure. Then I stopped another time, the fast lap is great but, after the red flag and the safety car a three stop was a no go, and we still did it.

“I don’t really get the point of that but we’ll look into it. Second is still okay but I think the way we were second today wasn’t very satisfying, I would’ve liked to be a bit more aggressive. If it fails being aggressive then so be it, I’ve nothing to lose, even if we would fail I’d still be second so I don’t get why we were so conservative.”