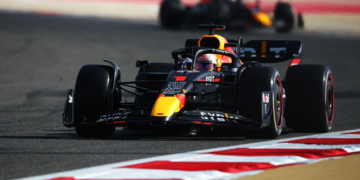 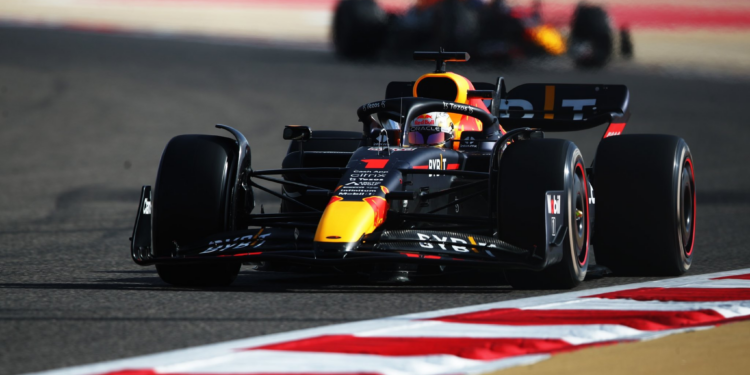 Bahrain Grand Prix – Max Verstappen posted the fastest time in second practice while the Ferraris once again slotted into P2 and P3.

Second practice is the most important of the three sessions as it’s the only one to take place at the same dusky time of day as qualifying and the race will. As with FP1 there was a steady stream of cars heading onto the circuit as soon as the light went green. A few notable exceptions to that were Lewis Hamilton and the two Red Bulls, of Max Verstappen and Sergio Perez, whose cars were still being worked on. Hamilton’s with a flurry of mechanics making setup changes and Perez apparently with brake issues.

After finishing the opening practice in P2 and P3, the Ferrari’s were on the pace again at the start of practice two with first Carlos Sainz and then Charles Leclerc, both on the medium compound, with the fastest time. The Monegasque’s 1:33.121 knocked just over a second off Pierre Gasly’s time from earlier.

Just before the fifteen minute mark Perez made his way to the track, Verstappen and Hamilton had already emerged and slotted into P2 and P6 by that stage, with the British driver informing Mercedes that the W13 was not the smoothest of rides as it was “still bouncing a lot.”

Just before the half hour mark, the last minute drivers were Kevin Magnussen popping his Haas into P2, just 0.062 seconds off Leclerc while Nico Hulkenberg, in his second hour of experiencing the 2022 Aston Martin, was only a tenth off the time of his teammate, Lance Stroll.

With all cars shod in the softest of compounds, the fast laps started coming in. Fernando Alonso was the first driver into the 1:32s with a 1:32.877 but the Alpine was only able to enjoy the top spot for a couple of minutes before Leclerc took over six tenths off the Alpine’s effort.

A couple of minutes later and they had made it into the 1:31s, Verstappen putting in a 1:31.936 while Hamilton, who was having awful struggles not just with the bouncing but also his front brakes, could only set a time in the 1:33s to slot into P9, splitting the two Haas cars of Mick Schumacher and Magnussen.

It wasn’t the best day for Daniel Ricciardo as his session ended early with his MCL36 springing a water leak and ending up with lots of body work off as the team worked on it in the garage.

Verstappen ended as the only driver to get into the 1:31s, while Leclerc, Sainz and George Russell ended both of the day’s practice sessions in P2, P3 and P4 respectively. Leclerc getting within a tenth while the other two were nearly six tenths slower.

Perez ended in P7 while both Haas cars made it into the top ten, Schumacher 1.149 seconds behind Verstappen and Magnussen a tenth further off. The two were split by Hamilton, who could only manage a 1:33.144.

There was an incident noted, and then upgraded to an investigation, by the stewards near the end of the practice hour as Yuki Tsunoda got in the way of Leclerc on a fast lap. The AlphaTauri driver will also be involved in another stewards investigation as at the very end of the session he tangled with Lance Stroll’s Aston Martin.