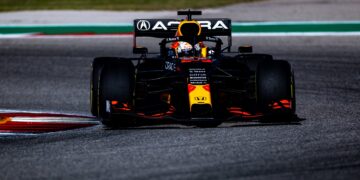 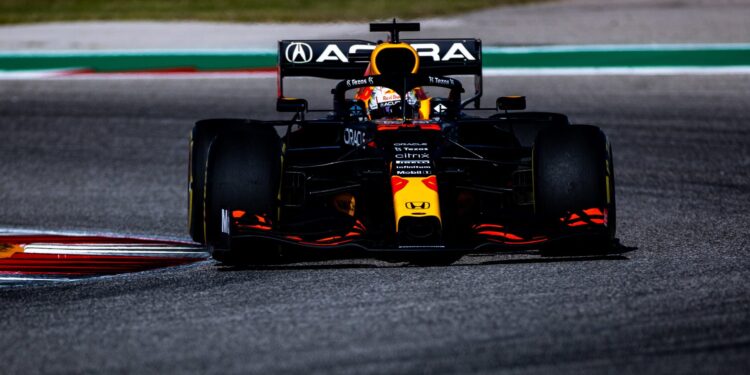 US Grand Prix – Red Bull’s Max Verstappen has claimed pole position ahead of the US Grand Prix.

The Dutchman’s time of 1:32.910 was just two tenths faster than the Mercedes of Lewis Hamilton in second place. Sergio Perez in the other Red Bull was down in third after getting provisional pole earlier in the session. Valtteri Bottas in the sister Mercedes was in fourth.

In Q1, it was Red Bull who held the upper hand as Verstappen and Perez set the benchmark times early on. There was nothing to separate the two teammates who were a tenth quicker than the Mercedes cars.

Ricciardo raised some eyebrows by going fastest at the half way point, with his teammate Norris slotting into third place, just behind Verstappen.

The pendulum swung Red Bull’s way again as Verstappen and Perez topped the timesheets, however the Dutchman’s time was just a whisker ahead of Ricciardo.

In the closing moments of Q1, Leclerc set a stunning laptime to go top by almost two tenths. Mercedes could only manage eighth and ninth with Hamilton fractionally faster than Bottas.

After the first laps in Q2, Verstappen shot to the top of the timesheets with a 1:33.464; some three tenths faster than Hamilton behind. Norris set the third fastest time ahead of Leclerc in the Ferrari.

Perez, Ricciardo, and Russell all had laptimes deleted for exceeding track limits and needed to go again.

There was a brief lull until the drivers went out again for their second runs. It was Perez who broke the silence in order to get a laptime on the board, closely followed by Ricciardo.

Verstappen, Hamilton, Leclerc, and Bottas decided not to go out for a second run, however, Perez managed to get his Red Bull up into seventh place, with Ricciardo managing ninth.

In the dying embers of the session, Yuki Tsunoda managed to get his AlphaTauri up into the top ten, pushing Esteban Ocon down into the drop zone.

Ocon, Sebastian Vettel, Antonio Giovinazzi, Fernando Alonso, and George Russell failed to make it through into the top ten shootout.

For the final shootout for pole, Perez seized the advantage on the first runs, narrowly beating his teammate by 0.019s. The Mercedes cars were in third and fourth, around three tenths behind, with Bottas getting the better of his teammate.

It was tight between Ferrari and McLaren, with Sainz and Leclerc in fifth and sixth, with Ricciardo and Norris in seventh and eighth.

With four minutes left of the session, there was a threat of rain as the drivers left the pits for their final runs for pole.

Hamilton managed to get a lap together a snatch provisional pole from Perez, but it was Verstappen who bagged the number one spot setting a time two tenths faster than the Mercedes.

Perez was unable to keep the lap together and set the third fastest time, with Bottas down in fourth.

Leclerc set the fifth fastest time ahead of his teammate Sainz. The two McLarens were close behind with Ricciardo in seventh and Norris in eigth.