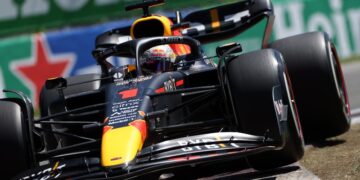 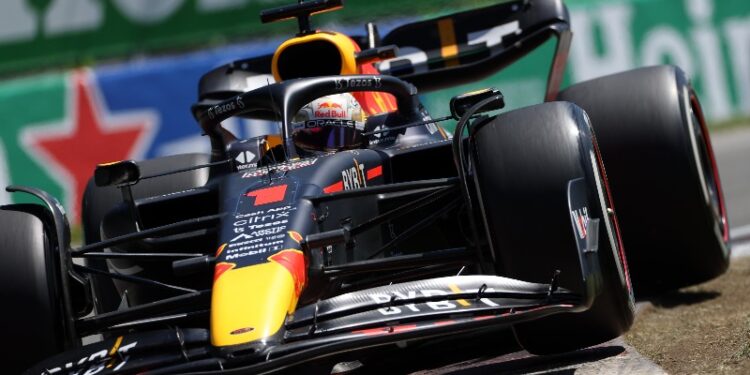 After the rain of yesterday, the sun made a glorious return for the Grand Prix where Max Verstappen was joined at the front of the grid by Fernando Alonso, the Spaniard’s first appearance on row one in ten years. Verstappen’s closest rivals, teammate Sergio Perez, and Charles Leclerc were well out of position – Perez in P13 after crashing out of qualifying, while the Ferrari driver had to serve penalties for changing his power unit which dropped him to the back row.

Having most of the pack to overtake in his search for points or a podium, Leclerc’s day didn’t start off so smoothly as his mechanics had some last minute work to do on his Ferrari on the grid as some cracks could be seen on the top of his right hand sidepod, and so sticky tape was applied to hopefully stop it from spreading.

After taking P2 yesterday, Alonso was hoping to be able to attack and lead a race again at the start but Verstappen had the better getaway so instead the Alpine driver had to defend his place from Carlos Sainz behind. After their best ever team qualifying of P5 and P6, Kevin Magnussen was able to hold his position but Mick Schumacher lost out to Esteban Ocon.

Lap three saw the first change in the podium positions with Sainz getting past Alonso for P2, though Verstappen was already over two seconds further up the road at that point. Despite the Ferrari driver putting in fastest laps after that, Alonso was able to stay within a second of him to hold onto the DRS and make it difficult for Lewis Hamilton behind to find and opportunity to move past the Alpine.

The strong race for Magnussen didn’t last however, the Dane seemed to have had an interesting start to the race as his front wing was damaged but unfortunately seven laps in he was shown a black and orange flag which required him to pit for a replacement and that saw him fall out of the points and right to the back of the pack.

Lap nine saw the Virtual Safety Car make an appearance when Perez, who had made it into the points in P10, lost drive in his Red Bull and coasted to a halt on track. While the VSC was operational, Verstappen headed to the pits to swap to the hard tyres and rejoined back in P3 behind the two Spaniards. Six laps later the Dutchman breezed past Alonso for P2 and started to close down Sainz.

The VSC was back in play once again on lap 20 when Haas’ day went from bad to worse as Schumacher, who was P7, lost drive and pulled off at the same place as Perez did. At the front, it was Sainz who took advantage and pitted for the hard tyres, and as Verstappen did, he rejoined in P3 while Alonso remained on the mediums he started with.

Further back McLaren also tried to take advantage of the VSC and double stack their two drivers who at that stage were in P9 and P13. Daniel Ricciardo swapped to the hards and rejoined in P12 but it all went wrong for Lando Norris whose tyres weren’t ready for him and he came out in P18.

Lap 22 saw Sainz overtake Alonso once again but this time, the Alpine also fell behind Hamilton not too long afterwards and his older tyres weren’t able to keep up with the pace. The Spaniard finally made his stop seven laps later, rejoining forty seconds back from the race leader and just behind Leclerc, who was still circulating on the same hard tyres he had started with.

At the halfway point, lap 35, Verstappen was in the lead and starting to struggle on his tyres, Sainz was P2 while the Mercedes of Hamilton and George Russell were in P3 and P4, each of the top four with a similar gap of eight-ish seconds between them.

After running right behind Ocon for multiple laps, Leclerc headed to the pits for his first and only stop on lap 42, unfortunately for the Monegasque it was a slow stop with the rear jack dropping the car before the tyres were properly on and that meant that the Ferrari rejoined in P12 right behind the train of Stroll, Zhou, Tsunoda and Ricciardo.

Lap 44 saw Verstappen pit for a second time, putting a new set of hards on and coming back onto the track right beside Hamilton. The Mercedes got the better of the Red Bull and took P2 but the Dutchman didn’t have to be annoyed for too long as he got past at the end of the lap, just before Hamilton took his own second stop, rejoining P4 but being handed the final podium spot again when Russell pitted.

On lap 49, thanks to overtakes and Stroll peeling off to the pits, Leclerc had finally cleared the traffic just as he did that, Tsunoda lost control of his car as he emerged from the pitlane, hitting the wall at T2 which brought the Safety Car out for the first time.

Sainz, who had been told a few minutes earlier that the safety car window was open, was able to pit from the lead for new hards and rejoin in P2. The Alpines, who had been in P5 and P6 behind the Mercedes cars, took the opportunity to stick on the mediums without losing position. Also around that time the stewards handed Norris a five second penalty for speeding in the pitlane, given he was running P16, it wouldn’t really impact his race too much however.

The race got back underway on lap 55 and although there were all line astern, there were no position changes on the first lap back despite Zhou’s best efforts to snatch P9 away from Vettel. The Alfa Romeo driver’s persistence did pay off though as a lap later he went around the outside of the Aston Martin on the start/finish straight.

At the front Sainz was right behind Verstappen and in DRS range but the two had dropped the Mercedes at that point. A few places further back, and Leclerc was on the move, getting past Alonso and had to overtake Ocon twice after straight lining the chicane as he passed the Frenchman for the first time, his second attempt, at the hairpin that time was much more successful.

In the final few laps Alonso was told that given he was having a straight line issue, he should hold station behind Ocon. The two time champion was clearly unhappy with that instruction replying that even with that, he was 100 times faster all weekend.

On the penultimate lap, Sainz, who was the closed he had been since the Safety Car was gearing up for a move but just made the slightest of mistakes which took the opportunity to make a play for his debut win away so he came home second, and took the fastest lap point.

Hamilton took the flag six seconds behind the top two to take his second podium of the season, once again just ahead of his teammate Russell. It was a strong recovery drive from the back to P5 from Leclerc, while the Alpines did take the chequered flag with Ocon ahead of Alonso though that inter-team battle was put on hold as the Alfa Romeos had closed up to the back of them.

Bottas took P8, just 0.3 seconds behind Alonso, with Zhou taking his best finish of the season, and his first time back in the points since his debut in Bahrain, with a P9. The final point went to Lance Stroll, who doesn’t have a bad record at his home race, having taken points each time he’s seen the chequered flag.