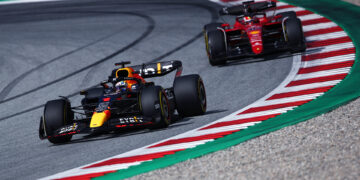 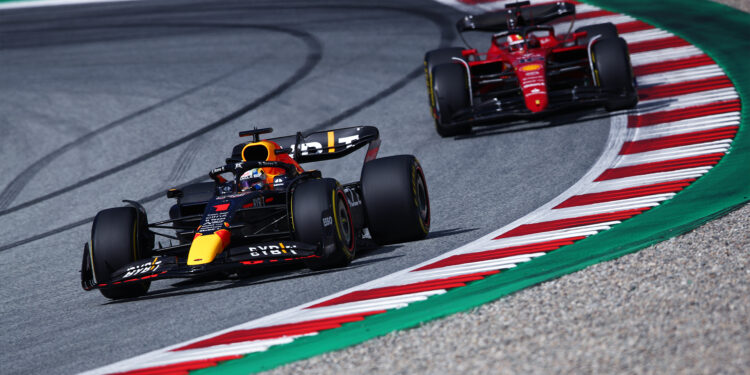 The second Sprint of the 2022 season saw the front row made up of both Max Verstappen and Charles Leclerc, just as they did back in Imola. After both Mercedes crashed in the final part of qualifying yesterday, the team had a lot of work to do to repair George Russell and Lewis Hamilton’s cars but despite a lot of parts being changed, there were no penalties taken so Russell will line up P4 with Hamilton P9.

Sergio Perez had qualified in P4 but post-qualifying had his Q2 lap deleted for exceeding track limits and so the Red Bull driver was demoted to P13.

There was an issue for Fernando Alonso who had lined up in P8, he was left on the jacks with tyre blankets on as the formation lap started as Alpine weren’t able to start his car on the grid. Once the other cars moved away he was wheeled to the pits as the team tried to sort the issue, but ultimately was unable to take the start.

There was more drama however as Zhou Guanyu’s stopped just as he came out of the final corner as the grid was being formed. That called an extra formation lap and while the Alfa Romeo was able to get back going he then had to start from the pits instead of P18.

As the lights went out for the now 23 lap Sprint, Leclerc challenged for P1 off the line. Verstappen was able to hold him off but that allowed Carlos Sainz to get past his teammate and make his own challenge for the lead. The Red Bull driver retained his position however and that left the Ferraris with an inter-team battle for P2 and it was Leclerc who won that battle by the end of the opening lap.

In a very similar start to the Zhou incident to last weekend, Hamilton ended up sandwiched between two cars, Pierre Gasly and Alex Albon, as the Sprint got underway. While in Silverstone it was Gasly in the middle and his wheel tagged Russell’s, this time it was Hamilton’s wheel which tagged Gasly’s rear, leaving the AlphaTauri to spin and fall back, but able to continue.

Lap 7 saw the Ferraris getting very close together as Sainz slipped down the inside of his teammate, but locked up allowing Leclerc back through and then the Monegasque had his elbows out for the next few corners as he defended P2. Meanwhile Verstappen had pulled an almost three second gap at the front.

Lap 11 saw the first Yellow Flag of the afternoon as Sebastian Vettel and Albon came together leaving the Aston Martin in the gravel. The German was able to use a mix of reverse and gravity down the hill to extract himself and get back in the race but he retired due to damage a few laps before the end. The stewards decided that it was a racing incident but Albon did have a 5 second penalty from a few laps earlier where he forced Lando Norris off the track.

Midway through the Sprint there was another inter-team battle on track as the two Haas cars battled over P7, just as Mick Schumacher did at the end of the British Grand Prix but this time against his teammate Kevin Magnussen rather than Verstappen. The Haas battle had a very interested Hamilton right behind them looking to take any advantage as he could, but was having difficulty as Schumacher was close enough to Magnussen to have DRS.

Towards the final few laps however as the Dane pulled ahead Hamilton, put the pressure on Schumacher and after a good battle with the young German, was able to move ahead to P8, the final points position for the Sprint, but there wasn’t enough time to close up and challenge Magnussen for P7.

Verstappen took the chequered flag first to ensure he’ll start the Grand Prix from pole position while Leclerc will once again start alongside him. Sainz and Russell will be on row two while Perez made a good recovery from P13 so he’ll start P5 alongside Esteban Ocon. Magnussen and Hamilton will be on row four while Schumacher in P9 will have Valtteri Bottas beside him.