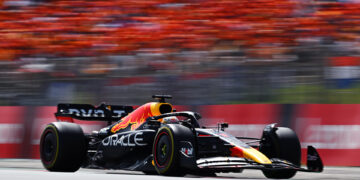 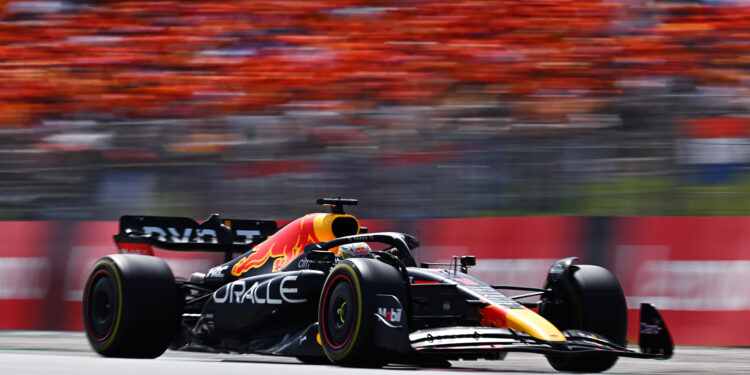 Spanish Grand Prix – Max Verstappen overcame an trip through the gravel and DRS issues to take a Red Bull 1-2 as Charles Leclerc retired with PU problems.

With high temperatures at the Circuit de Barcelona-Catalunya both the drivers and their tyres will be in for a difficult afternoon, with high degradation and multiple pit stops predicted. On the grid, the soft tyres were the pick for all but sixth placed Lewis Hamilton.

It was once again Charles Leclerc and Max Verstappen sharing the front row for the start of a race in 2022, while the reigning champion did have a look at the first corner, Leclerc managed to hold him off and hold the lead. Behind them it was a slow start for Carlos Sainz, the other Spaniard in the field falling back from P3 to P6 on the opening lap but made it back past Hamilton just before the Mercedes and Kevin Magnussen’s Haas came together as the Dane also tried to pass.

Magnussen ended up going through the gravel but that saw him fall to the back of the pack while Hamilton front left ended up punctured and the two had to pit at the end of the opening lap, the Haas switching to the mediums while the Mercedes went to the softs.

The big winner on the opening lap was the other Haas of Mick Schumacher, the young German had made it through to Q3 for the first time in qualifying yesterday and from P10 he was up to P6 as they ticked off the first of the 66 laps planned for the afternoon.

On lap 7 Sainz’ bad day got worse, the Ferrari driver spun into the gravel at turn 4, he was able to recover to the circuit but dropped down to P11, just two places ahead of his countryman Alonso, who had just pulled a move on Sebastian Vettel before Sainz’ off-track excursion.

A couple of laps later and the same corner saw more drama as Verstappen slid into the gravel. The Red Bull driver was then told that there was a large gust of wind at the corner but while had been just over two seconds behind Leclerc, that moment saw him lose seven seconds as well as track positions to George Russell and Sergio Perez.

Over the following few laps, Verstappen did get back past his teammate and was closing on Russell but an intermittent DRS issue, which meant that the flap on his rear wing would fail to open regularly, an issue he also experienced at the end of qualifying, greatly hampered his efforts.

Despite his DRS issues and a lot of frustration being broadcast on his radio messages to Red Bull, Verstappen made the move for P2 at the first corner on lap 24. While the Dutchman did get his nose ahead, Russell held out and there was some great wheel-to-wheel action for the following few corners and managed to hold the position.

At the front, Leclerc had pulled out a nice gap while the drivers behind squabbled. The Ferrari driver was able to pit and rejoin the track with almost six seconds to the cars behind and only extended that in the following few laps. The Monegasque’s luck however ran out on lap 28, his Ferrari losing power and he could do nothing but bring his F1-75 to the pits and retire from the race.

That meant that Russell and Verstappen were then fighting over the lead while Perez behind them had been asking for his teammate to let him through as he had fresher tyres and could overtake quickly. Red Bull didn’t allow that, but a lap after Leclerc retired, they brought Verstappen into the pits to swap from the mediums to softs, which dropped him to P4 behind Valtteri Bottas.

With the path to the new race leader clear, Perez proved that he wasn’t lying on the team radio as it only took him two laps to catch up, slip past Russell and start pulling his own lead. Behind them, Verstappen didn’t spend too much time behind the Alfa Romeo and he was back on the Mercedes’ rear wing by the time the Brit headed to the pits for his second stop.

It was then a Red Bull 1-2, Verstappen closing the gap to his teammate with his fresher tyres but before he got too close, Perez took his own final stop. The Mexican rejoined in P2, seventeen seconds behind the Dutchman and four ahead of Russell with still almost 30 laps left to run.

Lap 45 saw Verstappen in the pits for the third time as he switched back to the mediums. Perez retook the lead as he did, the Dutchman 5.8 seconds behind when he rejoined the action. Red Bull radioed the Mexican saying “You’re on a different strategy to Max. If he’s quicker, let him though.“ Perez was not overly impressed with that message, which meant that he would not be able to take his third F1 victory, he messaged back that “That’s very unfair, but ok.” And on lap 49, Verstappen was back in the lead.

The final podium position briefly changed hands on lap 52 when Russell pitted for a final time to go to the soft tyres. The pace of the Mercedes compared to Bottas on old mediums meant that it only took a lap for Russell to close up the four seconds and get back past. That stop then allowed Perez to take his own final trip to the pits to emerge still in P2 and with a chance to go for the fastest lap point.

After suggesting that they retire his car following his opening lap puncture, Mercedes had encouraged Hamilton to continue as they felt P8 was possible. The pace the seven-time champion had however meant that Mercedes were very wrong, but in a way that they wouldn’t really mind.

On lap 57 Hamilton was P6 and closing up on the battling duo of Sainz and Bottas. Lap 58 saw the Spaniard get past the Alfa Romeo and Hamilton followed though a few corners later, while on lap 60 the Mercedes got the better of the Ferrari and breezed past to slot in P4 behind his teammate. That dream finish was put into doubt on lap 65 when both Hamilton and Russell were told to do as much lift and coasting as possible as it was “a DNF risk”.

The worst case scenario didn’t occur for Mercedes but the slowing, did mean that Sainz managed to get back past Hamilton for P4, much to the delight of the Spanish crowd. Bottas took the chequered flag in P6 while despite Alonso’s pack of the pack starting position, both Alpines ended in the points. Esteban Ocon in P7 with Alonso P9.

The Alpines were split by Lando Norris, a very impressive drive for the McLaren racer as he was feeling unwell and suffering from a fever. The final points position went to AlphaTauri’s Yuki Tsunoda while Perez did indeed manage to take the fastest lap with a 1:24.108, a tenth and a half quicker than Hamilton, who had been holding the fastest lap until then.

After a great early start to the race, Schumacher’s first points were looking dependant on misfortune for the top ten as he sat in P11 for quite some time but fell back further in the final few laps after running more than half the race on one set of mediums.