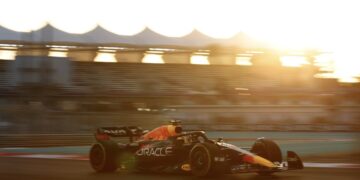 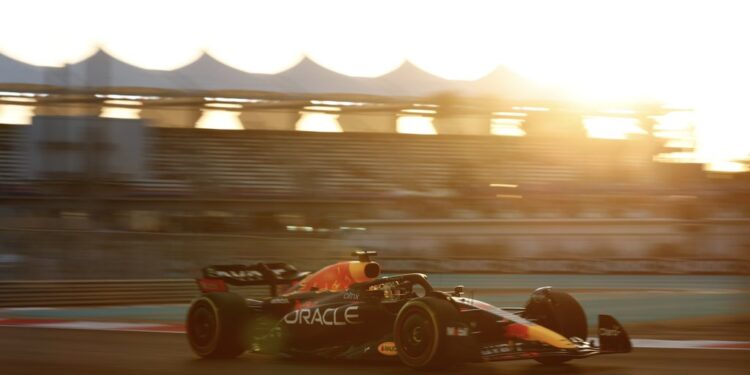 Abu Dhabi Grand Prix – Max Verstappen was quickest around the Yas Marina Circuit as he and Sergio Perez secured a front row lockout for the final race.

The final qualifying of the season started under the lights in Yas Marina and it was Nicholas Latifi, in his last F1 weekend, who led them out of the unusual underground pit exit. The Williams racer opened the timing with a 1:26.841.

With ten minutes on the clock all cars were out on track but only half had set times at that stage, with Sergio Perez the best of them with a 1:24.820. When every driver had finally set a time, Fernando Alonso being the last of them as he had only left his garage just before the clock ticked down to the final ten minutes, Max Verstappen had just pipped his teammate for P1 by 0.066, while the two Ferraris slotted in a few tenths behind.

The Dutch driver then returned to the pits asking the team to check his headrest as he felt it was broken. The track emptied completely with just less than five minutes to go and the drivers who were in danger of ending their season’s qualifying there and then were Sebastian Vettel, Mick Schumacher, Valtteri Bottas, Alex Albon and Latifi.

It was a very strong last lap for Vettel, despite having to get through a lot of traffic, he jumped himself up to P5 while Schumacher also had a great last run putting himself into P10. The two only lost one position each when the rest of the field set their times.

It ended with Kevin Magnussen in the other Haas, Pierre Gasly, Bottas, and the two Williams drivers failing to progress.

Mercedes were the first out for the second part of the session, Lewis Hamilton and George Russell having the track to themselves for their first timed laps though Hamilton was reporting back that he had some continuing brake issues. The seven-time champion set a 1:25.772 but was beaten by four tenths by his teammate at that stage.

After the opening gambits were all in and the track emptied of all but the Mercedes again it was Perez with a 1:24.419 leading Verstappen by nearly four and a half tenths, with Yuki Tsunoda, Daniel Ricciardo, Lance Stroll, Schumacher and Zhou Guanyu in the elimination zone. The Mercedes drivers improved their times, Hamilton splitting the Red Bulls while Russell moved up to P4 ahead of Carlos Sainz.

All fifteen cars were back on track for the final few minutes and while Ricciardo was able to put himself into the top ten shootout, the others weren’t and they were joined by Alonso, who ended P11. Vettel continued his great run despite having to deal with traffic at the end of another fast lap, but the German in the #5 car secured his final Q3 appearance with a time 0.555 seconds off Perez’ lap.

The Mercedes were once again first to take to the track, Hamilton with a 1:24.678 but after the first runs, for all but the McLarens, it was the Red Bulls and Ferraris alternating places with Verstappen a few tenths ahead of Sainz with a 1:23.988.

Vettel and Ricciardo had the track to themselves while the others were preparing for their final runs, the Aston Martin driver moving into P7, with the Australian P8 just as the other pole contenders started to re-emerge.

In the end it was Verstappen who held out at the front to take pole ahead of his teammate while Leclerc and Sainz will take up row two. That means that the big battle of the weekend, the fight for P2 in the championship, will have its contenders, Perez and Leclerc right up there together for tomorrow.

Mercedes will have control of row three with Hamilton in P5 ahead of Russell while Norris and Ocon will be behind them. Row five will see Vettel and Ricciardo, both heading into their final races of the foreseeable future.