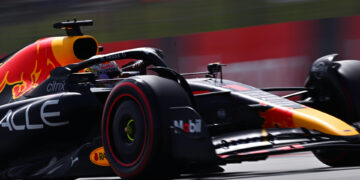 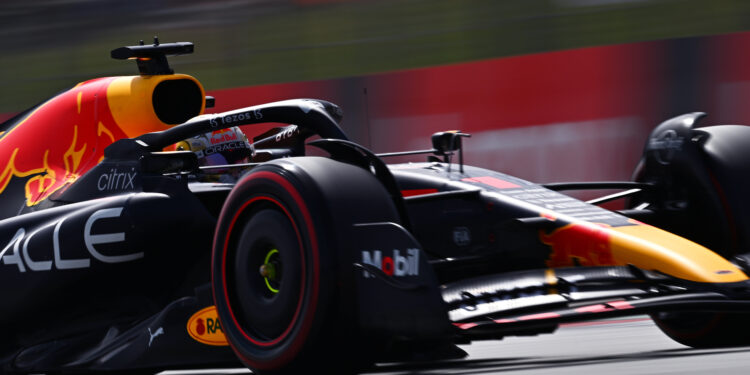 Canadian Grand Prix – Max Verstappen ended the first practice of the weekend at the top of the times while Fernando Alonso was up amongst the top two teams.

With a big dark cloud looming, the vast majority of the grid headed out to the track as soon as the session began. While a few returned to the pitlane after an outlap, it was only Nicholas Latifi, one of the two Montreal-born racers on the grid this season, Fernando Alonso and Alexander Albon who stuck it out in the garages for a few extra minutes.

The reigning champion and last weekend’s winner, Max Verstappen was the early leader on the timecharts with a 1:17.991. The Dutchman was briefly displaced by Valtteri Bottas and others but then became the first into the 1:16s, over half a second quicker than his rivals at that point with a 1:16.507 and then just continued shaving time off that for a 1:15.799.

Fifteen minutes into the session and Sergio Perez was fastest with a 1:15.660 while Esteban Ocon had to slowly return to the pits with a front right brake fire thanks to a paper towel getting caught on the Alpine’s brake duct and preventing airflow.

Ocon was not the only car in the pits at that stage, three quarters of the drivers had headed back to their teams following their opening runs. With the soft tyres on the Aston Martins were showing their pace, Lance Stroll, the other Montreal-born driver, and Sebastian Vettel slotting in behind the Red Bulls in P3 and P4.

Verstappen had an aborted start to his soft tyre run after one of his wheels was in the air when it shouldn’t have been, he returned to the garage for a few more minutes while the team checked things out, with Christian Horner reporting that it was due to a roll bar issue. All seemed to have been fixed as Verstappen was back to the top of the times on his first lap on the softs with a 1:15.158.

The fifteen or so minutes saw the majority of the field back on medium tyres doing long runs while overhead the dark clouds had slunk off to threaten other parts of Montreal. Back on ground level, the Canadian wildlife made an appearance with a groundhog playing a live action version of Frogger as it dodged F1 cars to cross the circuit.

Lando Norris’ session came to a slightly early end after McLaren spotted an unspecified issue so he sat out the final few minutes while the car was up on stands but with no frantic work going on, it doesn’t appear to be anything too worrying.

Carlos Sainz was the best of the Ferraris in P2 with a 1:25.404 while the top two were separated from their teammates by a the Alpine of  Fernando Alonso who slotted in with a time 0.373 seconds slower than Verstappen.

Perez was P4, half a tenth ahead of Charles Leclerc while George Russell’s 1:15.822 slotted his Mercedes into P6. Lewis Hamilton in P8 was stuck between the two Aston Martins with the seven-time champion setting a 1:15.877 the exact same as Stroll in P7. Vettel ended the session in P9 while Daniel Ricciardo rounded out the top ten as the last driver within a second of Verstappen’s time.