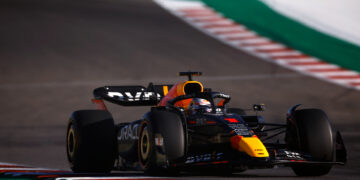 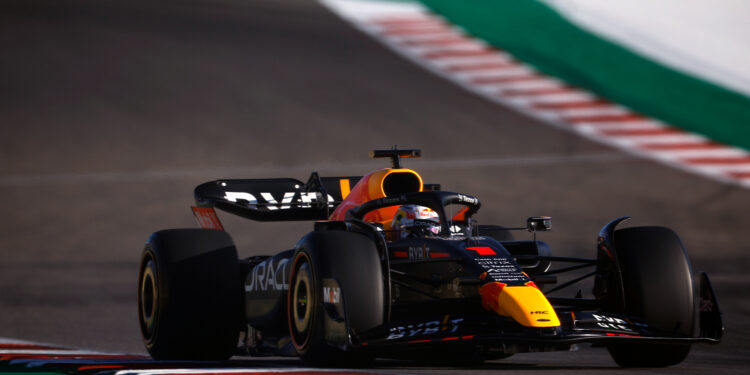 United States Grand Prix – Max Verstappen topped the times in final practice with the Ferraris the only ones within half a second of the Red Bull driver.

After five drivers sat out the opening practice to allow rookies/reserve drivers take their places and then the second practice taken over by Pirelli as a tyre test, today’s third practice session will be the first proper look at how the grid might look in qualifying later on.

The Alfa Romeos and Aston Martins were all quick off the mark and straight out onto the windy circuit when the session got going. Zhou Guanyu was the first to set a time, a 1:39.735, but after the first ten minutes Charles Leclerc was fastest with a 1:37.471, 0.065 seconds ahead of Max Verstappen but there were only nine drivers with times on the board at that point.

There was an issue for Mick Schumacher just as he was finishing his outlap, his Haas car lost drive just as he was passing the pit entrance though the German was able to keep the car going and make it back to the pits where the team said they knew what was wrong, an ERs water pump issue, and it would take 15 minutes to fix.

With 45 minutes still on the clock, twelve drivers had set fast laps but it was now Verstappen on top with the fastest lap so far in the weekend, a 1:36.706, while the Ferraris of Carlos Sainz and Leclerc were the closest to him.

Yuki Tsunoda was the last to take to the track, the AlphaTauri racer emerging almost twenty minutes into the session just as Daniel Ricciardo was messaging McLaren to report a brake pedal issue and slowly return to the pits to get it checked out.

At the half-way point Sergio Perez’ 1:36.578 was the best time so far, the Red Bull racer just over a tenth faster than Lewis Hamilton while Verstappen, with his earlier chart-topping time in P3. Schumacher was the only driver without a time and hadn’t yet re-emerged from the pits as Haas were still working to fix his car. Ricciardo’s issues though had been rectified and he was back circulating.

It was quite quiet out on track for a while with the majority of cars in the pits, Sainz was one of those on the circuit doing the long run work for Ferrari as an issue for Leclerc saw him having to remain in the garage. Schumacher got back on track with just less than fifteen minutes to go, his repairs taking slightly longer than Haas had originally estimated.

The final ten minutes saw qualifying simulations start and names jumping around the timesheets while the wind played its part, doing its best to throw the drivers off line and over the track limits. While that doesn’t matter in practice sessions as times aren’t deleted, if the wind remains then there could be a lot of wasted laps in qualifying with drivers going over the white lines.

A late lap from Verstappen saw him set a 1:35.825 but before that he, Leclerc and Sainz had all been very closely matched with only 0.05 seconds separating the three at the top.

Perez ended the session P4 with a 1:36.397, just 0.004 seconds quicker than the Hamilton’s best effort. Fernando Alonso was the first outside a second of the Dutch driver in P6 with George Russell a tenth further back in P7.

The Astons of Sebastian Vettel and Lance Stroll took P8 and P9, the German with a 1:37.151, while his teammate was just over six hundredths  slower, and AlphaTauri’s Pierre Gasly rounded out the top ten.