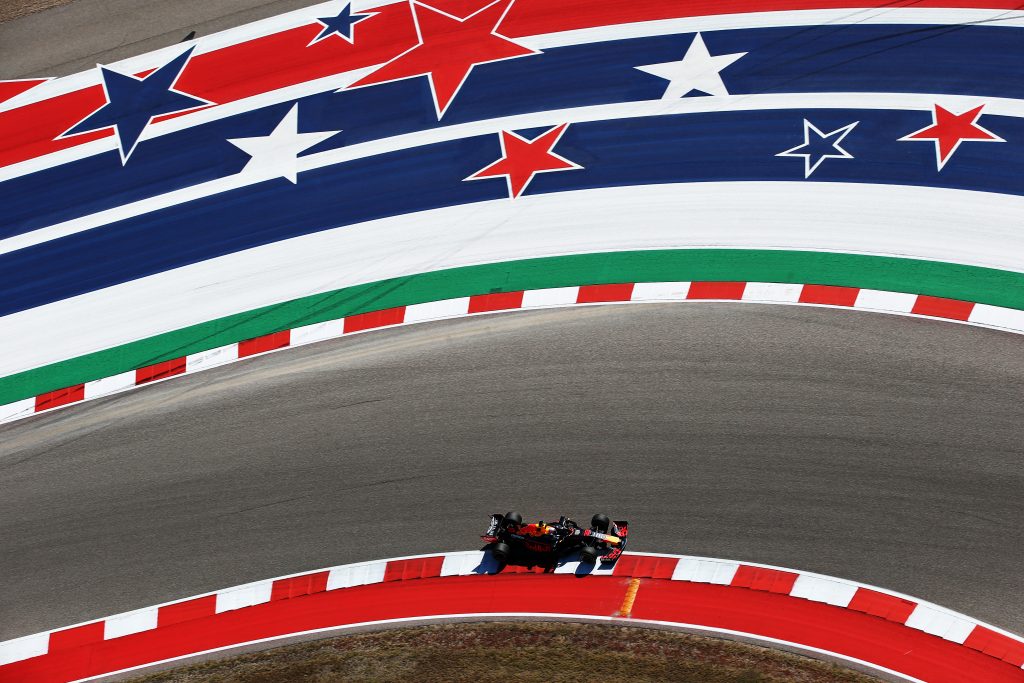 United States Grand Prix – Max Verstappen topped the opening free practice session at the Circuit of the Americas ahead of Sebastian Vettel and Alex Albon.

With the Red Bull driver celebrating his 100th Grand Prix start this weekend, he got his weekend off to the perfect start by setting the pace on a cold morning in Austin.

His time of 1:34.057 was less than two tenths ahead of Ferrari’s Vettel, and one-quarter of a second ahead of team-mate Albon.

In what turned out to be one of the most unrepresentative FP1 sessions of the season, drivers were faced with unseasonable cold conditions, severely bumpy track surfaces and Pirelli 2020 tyre testing duties.

With several teams taking part in 2020 tyre testing for Pirelli, Mercedes spent much of the session trialling the compounds, and finished down in 8th (Hamilton) and 17th (Bottas). This meant Ferrari and Red Bull were left to battle for free practice one honours.

With several drivers exceeding the track limits at turn nineteen, many times were deleted, including a faster lap for the second Ferrari of Charles Leclerc.

The Monegasque driver set the seventh-fastest time on the prototype tyres, but would have otherwise challenged for the top three. He also spent around 30-40 minutes in the pits with a throttle issue early on.

Lewis Hamilton – who needs just an eighth place finish to wrap up the title at the Circuit of the Americas – had taken fourth place on the soft tyres, but his time was deleted for the same track limits offence. His follow-up lap was good enough for eighth, albeit 1.3 seconds off the pace. He finished ahead of Racing Points’ Lance Stroll and Haas’ Kevin Magnussen.

The second Mercedes of Valtteri Bottas finished down in 17th, whilst Williams test and development driver Nicholas Latifi took part in his second of three back-to-back FP1 sessions, but suffered from mechanical issues and sat out much of the session.

To view the full results from the opening practice session, click here.