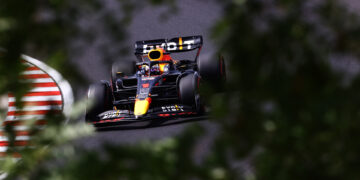 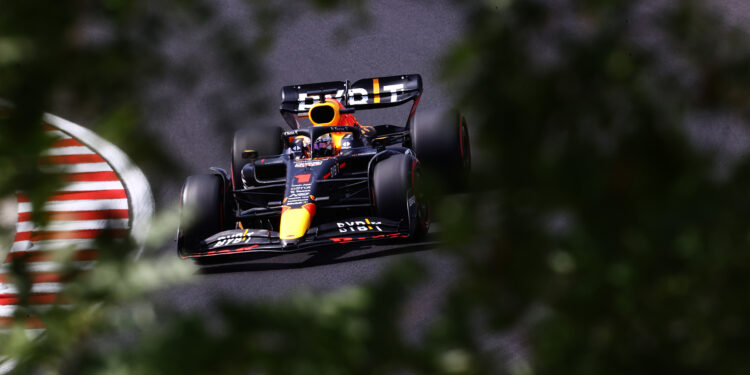 Hungarian Grand Prix – After qualifying P10, Max Verstappen powered through to take victory ahead of the Mercedes while Ferrari’s strategy failed them.

It was a day of surprises yesterday with first Nicholas Latifi going fastest in the changeable conditions of FP3 and then George Russell came out of the blue to snatch pole and prevent Ferrari from locking out the front row.

There was quite an even split of tyre compounds with Russell P1, Lando Norris P4, Daniel Ricciardo P9, Max Verstappen P10, Sergio Perez P11, Lance Stroll P14, Yuki Tsunoda P16, Sebastian Vettel P18, Latifi P19 and Pierre Gasly P20 (but starting from the pit lane after changing power unit components) all on the softs while the other half started on the mediums.

As the cars sat on the grid in the build up, the skies were darkening overhead with the pole sitter being told that high intensity rain was to be expected around the race start. It was still dry when the lights went out and while Carlos Sainz did go side-by-side with Russell it was the Mercedes driver who emerged from turn 1 in the lead.

Lewis Hamilton, who had DRS issues on his final run in Q3 which saw him only manage P7, had a much better start than the battling Alpines ahead, and jumped the two of them to get to P5. T2 saw a collision between Alex Albon and Vettel which saw debris littering the track and the Williams driver having to pit which dropped him to the back.

The Virtual Safety Car was brought out at the end of the opening lap so that the T2 debris could be cleared up and lap 3 saw the race back underway with Russell having a fantastic restart to pull out a nearly three second gap to the chasing Ferraris.

Fernando Alonso’s mood would not be getting better, he was unimpressed with Esteban Ocon’s defensive moves at the start of the race, a dramatic contrast to last season when the Spaniard fought tooth and nail to hold Hamilton back and help secure Ocon’s debut win.

Lap 5 saw Verstappen make his way past the Spaniard and the following couple of laps saw Verstappen also pass Ocon while his teammate Perez dropped Alonso down another spot to P9.

Lap 10 saw Hamilton right on the rear of Norris and looking to move into P4 but behind the two was Verstappen who was closing the gap quickly and the three were line astern on the following lap. The McLaren wasn’t able to defend against the power of DRS and at the first corner on lap 12, they two slipped past the papaya coloured car. A lap later and Perez had also slipped past so Norris was demoted to P7.

Just as Perez was overtaking, Verstappen was on the radio with more issues on his Red Bull but was told to fail a sensor and that seemed to solve that problem.

There was nothing between the two Ferraris as Charles Leclerc was asking to be let through and Sainz was told to box on lap 16 but he remained out for another lap while Russell ducked into the pits himself to swap to the mediums.

The Mercedes racer rejoined in P6 after a bit of a slow stop but Ferrari weren’t able to take advantage as they also had a slow stop with Sainz so he came out behind both Russell and Ocon.

Hamilton swapped tyres on lap 20, rejoining in P7, so that left Leclerc out in the lead with an 18.5 second gap to Russell in P2. The Monegasque came in on lap 22 and did manage to get out just ahead of his teammate while Russell retook the lead of the race.

Lap 25 saw the Alpine inter-team battle continue with the two fighting over P10 but as they were focused on each other, Ricciardo saw an opportunity and slipped past the two for the final points position while the two Alfa Romeos ahead of him now were still to make their first stops.

At the front the gap between Russell and Leclerc had been reduced to almost nothing and the Ferrari looked up for a fight. Lap 28 saw them go side-by-side at T3 but the Mercedes held on. The battle continued through the following laps but on lap 31 Leclerc finally made it work with a DRS assisted lunge around the outside of T1.

With Leclerc in the lead and starting to pull a gap, it was then Sainz who set his sights on Russell and started to close in on the Mercedes, but around the halfway point of the race Sainz had dropped slightly back while Verstappen was closing in on the Ferrari and the podium places.

Verstappen then headed to the pits, rejoining in P6, while lap 40 saw the race leader in and Ferrari changing him onto the hard tyre. Russell followed Leclerc in and went to the mediums. Leclerc came out in P3 while Russell was in P6 behind the two Red Bulls.

Verstappen’s new medium tyres got the better of Leclerc’s hards at the start of lap 41 but at the penultimate corner of the same lap Verstappen’s car seemed to possible get onto a slippy part of the track and went into a lazy 360 degrees spin which allowed Leclerc retake the final podium place.

The reigning champion however was the fastest car on the track at that point so it did not take him too long to catch back up to the scarlet car and at the start of lap 45 he tried around the outside at T1 but then cut back on Leclerc to get back to P3 at the corner exit.

At the front Sainz and Hamilton had still only made the one stop and Verstappen was only eleven seconds behind the leading Ferrari and setting much quicker lap times. Lap 48 saw Sains switch to the soft compound, another slow stop meant he rejoined in P5 a second and a half behind Russell. Hamilton inherited the lead but Verstappen was still closing in and there was only just over six seconds between P1 and P2.

At the end of lap 51 Verstappen had closed the gap to just over two seconds and Hamilton decided that was the perfect time to head to the pits. He rejoined on the softs in P5, ten seconds behind Sainz.

A few seconds ahead of Sainz was the battle for P2 with Russell right on the rear wing of Leclerc and on lap 54 he was into P2. At the end of that lap the Ferrari driver gave up on the hard compound in favour of the softs, which dropped him to P6 over six seconds behind Perez, and just as others were getting updates on potential rain in the coming minutes.

Lap 63 saw Ferrari’s bad day get worse as Hamilton got past Sainz on the start/finish straight and then pulled up right behind his teammate and, two laps after making it into the podium places again, he was past Russell and sitting pretty in P2.

Three laps before the end there was another Virtual Safety Car as Bottas pulled to the side of the track at T11, as his Alfa Romeo lost power. The Finn’s car was retrieved and the race got back underway with a lap and a half to race and just as the rain finally made an appearance.

The weather was too late to impact the race however and Verstappen cruised home to take an unexpected victory ahead of the two Mercedes. Sainz followed in a couple of seconds behind Russell in P4

Perez was P5 with Leclerc right on his rear wing at the end after a three stop race. Norris in P7 was the last driver on the lead lap, over a minute behind Leclerc’s Ferrari.

After a lot of squabbling during the race, Alonso did get the better of Ocon at the end to take P8 to the Frenchman’s P9 while the final point went to Vettel.