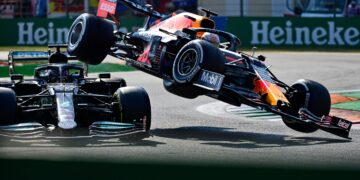 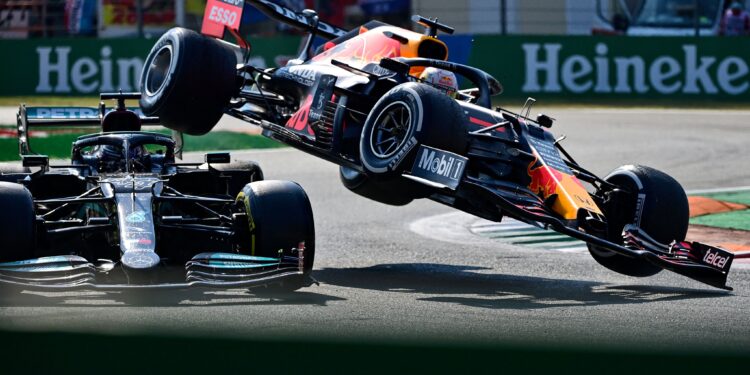 Italian Grand Prix – Max Verstappen has been given a three place grid penalty and penalty points for his race-ending collision with Lewis Hamilton.

Just less than half-way through today’s Italian Grand Prix, Lewis Hamilton was emerging from the pit lane after his only scheduled stop of the race, the Mercedes driver not having the pace to keep McLaren’s Lando Norris behind and ended fighting with the next driver on track, his championship rival, Max Verstappen.

The Dutch racer had been well ahead of Hamilton before the pit stops started but a disastrous 11 second stop from the usually perfect Red Bull crew had dropped Verstappen from overall P2, to fighting for P4 with the Mercedes.

The two went into the first chicane almost side-by-side, neither conceding the corner to the other and Verstappen, on the inside, hit one of the sausage kerbs at the apex of the chicane which launched his car up and onto Hamilton’s Mercedes. Both ended their races in the gravel on the outside of the corner with the rear of the Red Bull settling on the nose of the Mercedes after having destroyed the rear wing and roll-hoop camera.

As the Red Bull travelled across the Mercedes its rear right wheel did make contact with Hamilton’s helmet which, without the halo, could have had much more serious consequences than the slightly sore neck the British driver admitted to suffering as a result.

The incident was investigated by the stewards after the race and while pundit opinions varied greatly, as always, the official decision was that it was Verstappen who held the majority of the blame and will now have to take a three-place grid drop at the next race, the Russian Grand Prix in Sochi in two weeks time, and has also been given two penalty points for the incident.

The full stewards decision read: “The Stewards heard from the driver of car 33 (Max Verstappen), the driver of car 44 (Lewis Hamilton) and team representatives, reviewed the video evidence and determined that the driver of Car 33 was predominantly to blame for the collision with Car 44 at Turn 2.

“Car 44 was exiting the pits. Car 33 was on the main straight. At the 50m board before Turn 1, Car 44 was significantly ahead of Car 33. Car 33 braked late and started to move alongside Car 44, although at no point in the sequence does Car 33 get any further forward than just behind the front wheel of Car 44.

“In coming to the penalty the Stewards emphasise that they have only considered the incident itself and not the consequences thereof.”