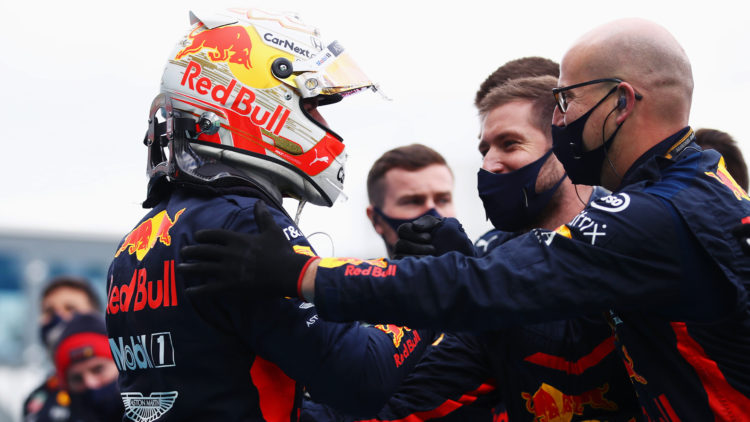 Eifel Grand Prix – Max Verstappen believes his second place was where Red Bull deserved to be this weekend as he joined Hamilton and Ricciardo on the podium.


Verstappen continued his run of podium finishes this year after taking his fifth second place of the season at this afternoon’s Eifel Grand Prix. The Red Bull driver was in a race of his own for the majority of the day only really having one possibility at Hamilton’s lead, at the restart, but the Mercedes driver did everything right leaving Verstappen without a chance at the lead.

As Hamilton secured his 91st race win, Verstappen did manage to spoil his party slightly but snatching the fastest lap, and the associated championship point, away from the Brit on the very last lap.

“We finished second where I think we belong today,” said Verstappen. “And that’s the most important. I think overall it was a good race. I was just trying to follow Lewis once Valtteri dropped out. I think the pace was good, just tried to do our own race, they were just a little bit too fast.

“Last lap I thought “I’m just going to give it a go and see what happens”, we just managed to get that fastest lap but also that one extra point, so I was pretty happy with that.”

During the safety car period near the end of the race Verstappen, along with race leader Hamilton, were very vocal on their radios complaining about the speed of the safety car. The two were worried that the slow speed, along with the cold track temperature would make things dangerous for the drivers to try get back to racing when the tyres weren’t warmed up or giving enough grip.

“The track is very cold, the tyres are already cold when you leave the box and I just didn’t understand why the safety car was out so long, I mean the car was cleared. I understand they want to bunch up the field but it’s pretty dangerous with these cars when the tyres are so cold. We’ll look into that.”