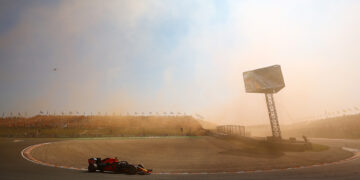 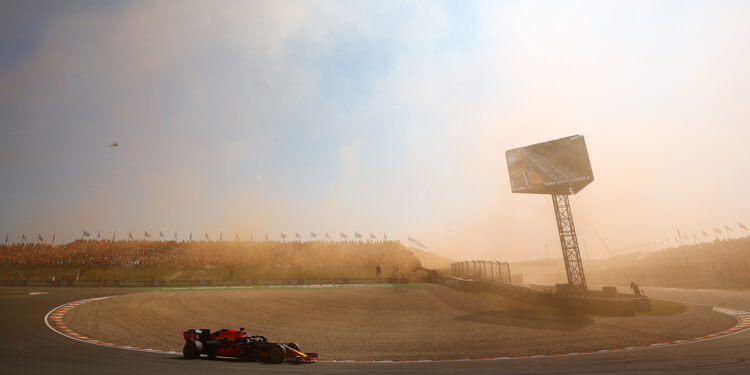 Dutch Grand Prix – Red Bull’s Max Verstappen has claimed victory at his home race to see off a charge from championship leader Lewis Hamilton in the Mercedes.

Verstappen got off the line well and after just one lap was 1.7s clear of Hamilton behind. The race then settled down into a rhythm with Verstappen maintaining a gap to Hamilton of about three seconds until the first round of pitstops.

After Red Bull gave Verstappen the hurry up in order to gear up for another stop around Lap 40, Mercedes chose to pit Hamilton on the medium tyres. Verstappen then chose to pit but fitted the hard tyres. After making gains, Hamilton was unable to get close enough to challenge Verstappen for the win and took victory to a rapturous Dutch crowd.

Mercedes teammate Valtteri Bottas finished in third place after a quiet afternoon behind the leading pair.

Perez pit for new soft tyres on Lap 9 after locking up heavily behind Nikita Mazepin and getting a huge flat spot on the hards. As a result, the Mexican was the fastest car on the track and set the fastest lap. Sebastian Vettel decided to follow suit and pit a lap later.

On Lap 20, second placed man Hamilton came into the pits for a tyre change to the medium compound. The Briton had a slower stop of around 3 seconds and came out behind his teammate Bottas who didn’t stop.

Verstappen came into the pits a lap later on a slightly quicker stop and came out in between the two Mercedes cars. Regardless of the poor stop, Hamilton was a lot closer and just 1.7s within Verstappen ahead. With Bottas going on long the softs, Verstappen started to catch the Finnish driver, dragging Hamilton along with him. The Briton started to edge into Verstappen’s lead ahead.

Verstappen finally managed to make a move on Bottas on Lap 31, however being stuck behind the Mercedes car on much older tyres allowed Hamilton to close up within DRS range of the Red Bull. Bottas then came into the pits, releasing Verstappen in clear air and allowing the Dutchman to extend his lead over Hamilton to 1.5 seconds.

On Lap 34, George Russell received a five second time penalty for speeding in the pitlane during his stop. The Williams driver was driving well and just outside of the top ten.

The yellow flags were brought out on lap 37 to deal with a spin from Vettel at Turn 3. The Aston Martin wasn’t damaged, but it did halt the progress of Bottas behind who had to take evading action in his Mercedes, running up to the wider line on the banked corner.

Up front, the gap between Hamilton and Verstappen was up to 2.4 seconds with the Dutchman receiving the hint of another stop over the radio. Verstappen was told to increase pace over five laps, however Mercedes decided to roll the dice and pit Hamilton instead and came into the pits on Lap 40.

Hamilton came out in traffic which allowed Red Bull to pit Verstappen a lap later. When the Dutchman left the pits, he’d extended his advantage over Hamilton to 3.1 seconds. Both drivers came out ahead of the other Mercedes of Bottas. Crucially, Red Bull put Verstappen on the hards whilst Mercedes elected to fit slightly used mediums to Hamilton’s car.

The gap seemed to stabilise between the two championship contenders as it went up to 4 seconds on Lap 48 – the hard tyres appearing to work well for Verstappen. However, with 20 laps to go, Hamilton put his foot down and got to within two seconds of the race leader.

A call from the Mercedes pitwall indicated that the team were content to hold station and go for fastest lap at the end of the race. The opportunity just never came however as Verstappen crossed the line to take the win.

Pierre Gasly, who had a strong afternoon, came home in fourth for AlphaTauri ahead of the Ferrari of Charles Leclerc.

Carlos Sainz was unable to see off a late charge from Alpine’s Fernando Alonso who came home in sixth place ahead of his teammate in ninth place.

Perez, who spent most of the afternoon charging through the field, finished in eighth place despite starting from the pitlane.

Lando Norris eventually finished in the points for McLaren ahead of his teammate Daniel Ricciardo. Lando Stroll for Aston Martin finished in 12th with teammate Vettel behind in 13th. Antonio Giovinazzi finished down in 14th for Alfa Romeo after a decent starting position of seventh. He finished ahead of stand-in Robert Kubica in 15th.

Nicholas Latifi finished in 16th place ahead of teammate Russell who had to pit late and serve his five second penalty. Mick Schumacher finished last of the runners in the Haas.

There were two retirements with Nikita Mazepin pulling his Haas into the garage with powertrain problems, and Yuki Tsunoda for AlphaTauri following suit later in the race.