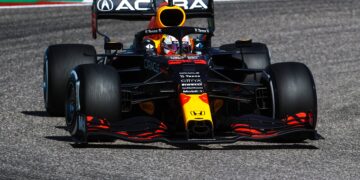 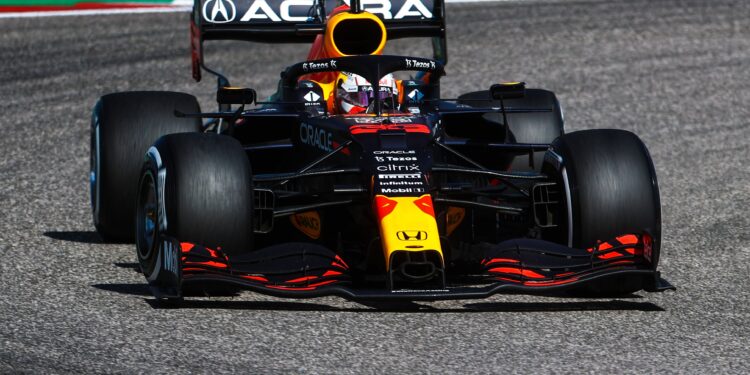 US Grand Prix – Red Bull’s Max Verstappen has taken victory at the US Grand Prix to see off a charge from Mercedes’ Lewis Hamilton behind.

Hamilton took the early lead in the race by overtaking Verstappen into Turn 1, however Red Bull brought the Dutchman in early to use the undercut on Hamilton.

It was successful and Verstappen took the lead in the middle of the race. However, Hamilton stayed out longer and when the second round of pitstops came, Verstappen pitted first again. With fresher tyres, Hamilton started to bear down on Verstappen ahead, but when hitting in the dirty air, the Red Bull driver was able to stay just ahead to cross the line in first place.

At the start, Hamilton got a lightening start and managed to get past Verstappen into Turn 1, despite defensive movements from the Dutchman. Just behind, Ferrari and McLaren locked horns with Ricciardo dicing with Sainz. The McLaren driver eventually found a way past the Spanish driver and moved up to fifth place.

At the back of the pack, Williams driver Nicholas Latifi and Aston Martin’s Lance Stroll made contact bringing out the yellow flags. Alpine’s Esteban Ocon had to come into the pits on Lap 4 due to damage on his front after clipping an AlphaTauri early in the race.

After seven laps, Verstappen was still nipping at the heels of Hamilton’s Mercedes, with the Briton exclaiming over the radio “he’s quicker than me”. The pair up front started to pull away from Perez in third place, with the gap pulling out to just under three seconds.

Yuki Tsunoda brought it AlphaTauri into the pits on Lap 10 to get rid of his soft tyres. The Japanese driver was one of two drivers who started on the red marked softer Pirelli compound, with Sainz being the other.

Verstappen was the first of the front runners to force the issue and came into the pits on Lap 10 to try the undercut on Hamilton up front. Lando Norris and Pierre Gasly also came in to try and make gains on drivers up front. Hamilton decided to carry on and didn’t react to the Red Bull stop.

Verstappen came out of the pits behind Ricciardo and struggled to pass the McLaren, even with DRS. Ricciardo and Sainz then came into the pits on Lap 12 promoting Valtteri Bottas up to fifth place. The Mercedes driver was still 34 seconds behind his teammate in the lead.

On Lap 12, Red Bull brought Perez into the pits as Ferrari swapped Leclerc to fresh tyres as well. The stops allowed Verstappen to get up into second place and just 15 seconds behind Hamilton up front.

Hamilton then came into the pits on Lap 13 and managed to come out ahead of Perez to sit in second place. Verstappen then took the lead forcing the Mercedes to hunt down the Red Bull up front.

On Lap 15, Pierre Gasly had a problem as the Frenchman’s suspension seemed to get damaged running over the kerbs and was forced to retire. It was a race full of drama for the AlphaTauri driver as, prior to the race, a sensor issue meant the mechanics had to work on his AT02 whilst sitting on the grid.

Bottas came into the pits on Lap 16 and fell down the order to 11th place. The Mercedes driver was nearly 50 seconds off the leader. Meanwhile, Kimi Raikkonen and Fernando Alonso battled for 13th place. The pair briefly touched with Alonso fuming over the radio that the Finn overtook him off the circuit.

With 20 laps gone, the gap between the front runners was holding firm at around six seconds, as both drivers looked after their hard compound tyres. However, by Lap 23, Hamilton started to apply pressure to the Red Bull driver up front by setting a personal best time and reducing the gap to below five seconds.

By Lap 26, the gap between Verstappen and Hamilton got down to three seconds as the Red Bull started to struggle with the rear tyres. On Lap 28, the Virtual Safety Car was brought out whilst a marshall took to the track to retrieve a piece of debris – the VSC was out for less than a lap and the gap up front remained around three seconds once green flag racing resumed.

Verstappen blinked first for the second round of stops and came into the pits on Lap 29. Donning fresh hard tyres the Dutchman came out behind his teammate in third place. Hamilton elected to stay out again and immediately set the fastest lap of a 1:40.081.

Sainz had a slow stop on Lap 30 which opened the door for McLaren to pit both of their drivers. Ricciardo came in first with Norris following after. The Australian managed to stay ahead of Sainz and was clear by just under four seconds.

On Lap 33, the gap started to gradually reduce between the leaders with Hamilton enjoying a gap of 15 seconds over Verstappen in second place. Mercedes teammate Bottas came into the pits on Lap 34 and dropped behind the McLaren and Ferrari battle to come out in between Sainz and Norris.

Hamilton eventually came into the pits on Lap 37 for fresh hard tyres allowing Verstappen to retake the lead of the race. Crucially, the Briton came out ahead of Perez in the other Red Bull. Hamilton set out to close down the gap to Verstappen and by Lap 40, the gap was down to just 7.7 seconds.

Hamilton set the fastest lap on Lap 41 but setting a 1:38.485 and started to bear down on the Red Bull up front as Verstappen started to negotiate traffic. The gap closed down to just six seconds.

Alpine were forced to retire Ocon with mechanical issues and the Frenchman had to come in to the pits on Lap 42.

Lap 43, and Hamilton hit the traffic that Verstappen had to navigate through a few laps earlier. However, the gap closed down to under four seconds and the Mercedes driver used the fresher tyres to good effect.

With six laps to go, Hamilton started to hit the dirty air behind Verstappen’s Red Bull as the gap closed to under two seconds.

It was a bad day for Alpine as, with five laps to go, Alonso came in to retire the car with rear wing issues.

In the closing stages the tension up front was palpable as the gap got down to just over one second between the two championship contenders. However Verstappen did just enough to take the win by just over a second.

Ricciardo saw off a challenge from Bottas to finish in fifth, with the Mercedes driver coming home in sixth place. Sainz managed to cross the line in seventh place, seeing off Norris behind in eighth who finished within one second of the Ferrari driver.

Tsunoda was the sole AlphaTauri finisher who crossed the line in ninth, with Vettel in the Aston Martin rounded out the points finishers in tenth.

Antonio Giovinazzi finished in 11th for Alfa Romeo, with Lance Stroll in the Aston Martin finishing in 12th place. World champion Kimi Raikkonen finished in 13th place with George Russell in the Williams just behind in 14th.

Teammate Latifi finished in 15th place, with the Haas drivers of Mick Schumacher and Nikita Mazepin last of the classified finishers.

Alonso, Ocon, and Gasly were the only retirements from the race.