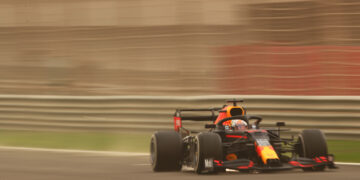 Verstappen sets the pace on the first day of testing

Verstappen sets the pace on the first day of testing 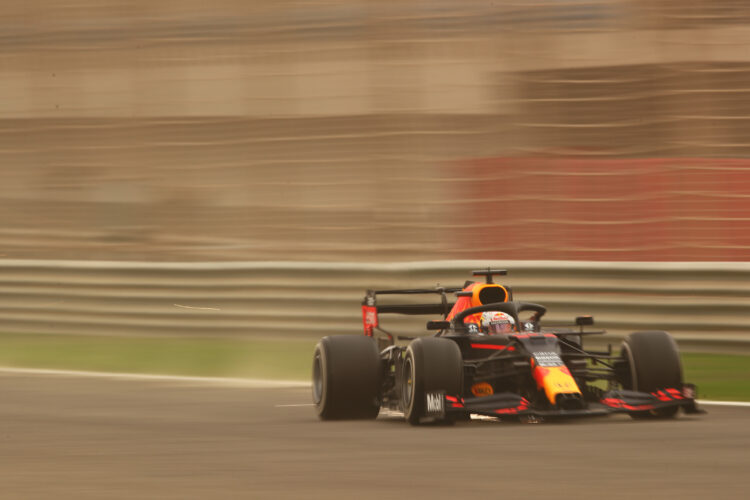 Red Bull’s Max Verstappen has set the fastest time on the opening day of testing at the Bahrain Circuit, ahead of McLaren’s Lando Norris.

Max Verstappen has ended the first day of pre-season testing as the fastest driver.

The afternoon session of the first day of the test was held in very unusual conditions, as a looming sandstorm hit the track. While the conditions weren’t severe enough to trigger a red flag, visibility was quite poor. Grip, too, was at a premium as the cars skated across the surface of the circuit.

Nikita Mazepin, stepping into the Haas for the afternoon session, got stuck straight in as he and the team are priotising mileage ahead of his rookie season. Joining him on track was Alpha Tauri’s Yuki Tsunoda and Alpine’s Esteban Ocon.

While times at the start of the afternoon weren’t good, conditions slowly improved into the evening and the times eventually did start to fall.

Max Verstappen, staying in the Red Bull RB16B for the whole day, lowered the benchmark to 1:30.674 on the C3 tyre compound. He completed over 130 laps during the day, the equivalent of just over two Grand Prix distances. His best time was enough to finish 0.2 clear of McLaren’s Lando Norris. The English driver, taking over the McLaren MCL35 from Daniel Ricciardo after the Australian set the pace during the morning session, put in a time with an hour remaining that moved him up to P2 with a 1:30.889 on the C3 tyres.

Esteban Ocon did 129 laps of the circuit in his Alpine, finishing up P3 on the timing sheets. He was 0.472 off the pace set by Verstappen. The French driver’s best time was set on the C4 compound.

Lance Stroll, taking over the Aston Martin AMR21 from Sebastian Vettel for the afternoon, finished up in P4. He set a time in the last hour that moved him up from the very bottom of the times, using the prototype tyre with fifteen minutes to go that moved him up the order.

Carlos Sainz was P5 for Ferrari, after spinning his SF21 at Turn 11. Escaping from hitting anything, Sainz was able to recover and set a time of 1:31.919 on the C3. He completed 57 laps during the afternoon, adding to Leclerc’s tally of 59 from the morning session.

Antonio Giovinazzi finished in P6 for Alfa Romeo after taking over the C41 from Kimi Raikkonen. The Italian driver did a 1:31.945 during his 68 laps, set on the C3 compound.

Morning pacesetter Daniel Ricciardo wound up in P7 by the end of the day, with the McLaren driver in front of fellow morning participant Pierre Gasly for Alpha Tauri in P8. Gasly handed over the AT02 to Yuki Tsunoda, who spent the afternoon getting used to his new office as he wound up with a fastest time of 1:32.231 during his 37 laps.

Lewis Hamilton was P10 for Mercedes, after a troubled day for Mercedes. With Valtteri Bottas missing most of the morning session with a gearbox issue, Hamilton headed out on track in the W12 but, almost immediately, requested to come back in for a change of pedals. Having lost more track time to this, he came back out but struggled for grip as he ran wide and locked up on several occasions. His best time, on the C2 tyre, was 1:32.912, 2.2 away from the front.

Ferrari’s Charles Leclerc was P11, with Kimi Raikkonen P12 for Alfa Romeo. Sebastian Vettel finished P13 on his opening day for Aston Martin, while Roy Nissany was P14 for Williams as the Israeli driver drove the entire day.

Nikita Mazepin drove the Haas for the afternoon, finishing in P15. He was another driver to test the limits of grip, spinning his VF-21 at Turn 11. Mick Schumacher was P16 after his morning run in the Haas, while Valtteri Bottas rounded out the order.

Testing is scheduled to continue at the circuit from 10am local time on Saturday, although the weather forecast suggests sandstorms could have an effect on track time.