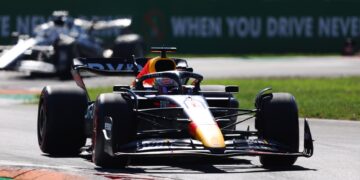 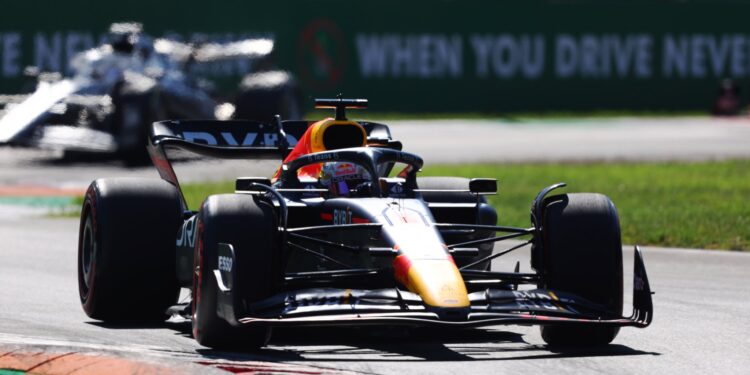 It’s a mixed up, muddled up grid thanks to grid penalties and that will see Charles Leclerc on pole, the only driver to start where he qualified, with George Russell alongside him and the two McLarens on the second row. Max Verstappen will be starting P7 with his rookie countryman Nyck de Vries beside him. At the back, ready to fight their way through, will be Carlos Sainz and Lewis Hamilton who line up in P18 and P19.

Once the lights go out Fernando Alonso, starting P6, will equal Kimi Raikkonen’s record of 349 Formula 1 race starts and become the joint most experienced driver in the series’ history.

On the tyre front, the mediums are the majority choice for the start though Leclerc P1, Russell P2, Verstappen P7, de Vries P8 and Esteban Ocon P14 have chosen the red-ringed soft tyres instead.

It was a perfect start for Leclerc, holding off Russell at the first corner and pulling out a second over the Mercedes through the first lap. It was an awful start for Lando Norris however, the McLaren bogging down on the grid and dropping back to P7. The best opening lap was from Verstappen though, the reigning champion getting up into the podium positions by the start of the second lap.

Verstappen was up into P2 at the start of lap 5 after breezing past Russell into the first chicane and then there was just two seconds separating him and Leclerc at the front. While Sainz had made his way up into the points positions by lap 6, Hamilton had not had as much joy and was only P18 and was battling to keep Mick Schumacher’s Haas behind while trying to get close enough to Yuki Tsunoda ahead.

Lap 7 saw the first pit stop with Sergio Perez swapping to the hards from P13 before he rejoined at the back but with smoke and flames coming from his right front tyre. The Mexican was told to adjust his brake bias and continued though he was almost 20 seconds behind the rest of the field.

Lap 12 saw Sainz move into P5 but further back there was more smoke on track with Sebastian Vettel’s Aston Martin looking less than ideal with puffs coming out the rear. The German was told to pull over and the Virtual Safety Car was brought out to cover his recovery.

Leclerc made his stop just as the VSC was ending, the Monegasque swapping to medium tyres and rejoining in P3, just ahead of Daniel Ricciardo, and 12 seconds behind Russell. A lap later saw the two Ferraris line astern on track as Sainz dispatched the McLaren to the delighted cheers of the tifosi.

Lap 16 saw Ferrari tell Leclerc not to short shift on corner exits, to which their driver told them that he can’t and to make sure the engine is right. It didn’t look like there was any effect on his performance at the time though.

On lap 20, Ricciardo headed to the pits just as Norris had managed to get the McLarens together on track again, The Australian rejoined in P12 on the hards while at the same time de Vries made his first race pit stop, swapping to the mediums and falling out of the points places for the first time today as he slotted back on track in P14.

Russell made his first stop on lap 24, dropping from second to P4 on the hard tyres while the race leader made his switch to the mediums a couple of laps later, slotting back into P2 with a good gap to the Ferraris on either side of him.

After more than half the race on mediums, Sainz made his only stop on lap 31. The Spaniard sent up a lot of smoke as he slammed on the brakes before the pit speed limit line before changing to soft tyres and getting back on track in P8 just behind Perez.

The second retirement of the race came on lap 33 when Alonso was told he had an “issue”, later revealed as a drop in water pressure, and should head to the pits and retire from P6.

Ferrari made the choice to go onto a two-stop with Leclerc instead of sticking it out on mediums 13 laps older than Verstappens. On lap 34 the Monegasque ducked into the pits from the lead, swapped to the softs and emerged in P2, 19 seconds behind the Red Bull and then proceeded to be slower than the Dutchman on his first few laps before getting up to speed but at nowhere near enough pace to challenge for the win.

Norris also made the swap to softs around that time, the McLaren racer had a slow stop though which saw him rejoin behind his teammate, going side-by-side with Pierre Gasly into the chicane. The AlphaTauri driver got the better of it at that point but Hamilton, who had made his own swap to the red-ringed tyre a couple of laps earlier, flew past the two of them to take P7.

The third retirement came on lap 41 as Lance Stroll was told to cool his brakes and retire in the pits, while the fourth came six laps later when Ricciardo ground to a halt from P8 with engine issues. That saw the first Safety Car of the race while the top four – Verstappen, Leclerc, Russell and Sainz – all changed to new softs.

Behind them Hamilton remained out, not having enough of a gap to Perez behind as the Mexican had stopped on lap 44 and didn’t need to fit a fresher set of softs. In the end though it didn’t matter as the Safety Car had picked up Russell as the first car which meant that all but the top two and the lapped cars had to pass the Safety Car and only caught up to the train at the start of the last lap, meaning there was no time for the race to restart.

It ended with Verstappen taking the chequered flag ahead of Leclerc and Russell to see the Dutchman make his first appearance on the Monza podium. Sainz and Hamilton came home P4 and P5 after starting at the back.

The fastest lap point went to the P6 driver Perez, with Norris and Gasly right behind him. In his first ever race de Vries equalled Alex Albon’s best result of the season and will take two points back to Williams after finishing P9. The Dutchman was also voted Driver of the Day, while the final point went to Alfa Romeo’s Zhou Guanyu.

The moment you secure your first @F1 points on your debut 🙌#WeAreWilliams #ItalianGP @nyckdevries pic.twitter.com/yorhBP4qbD