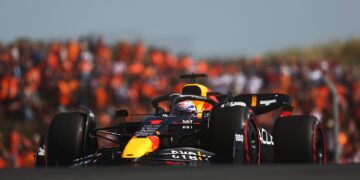 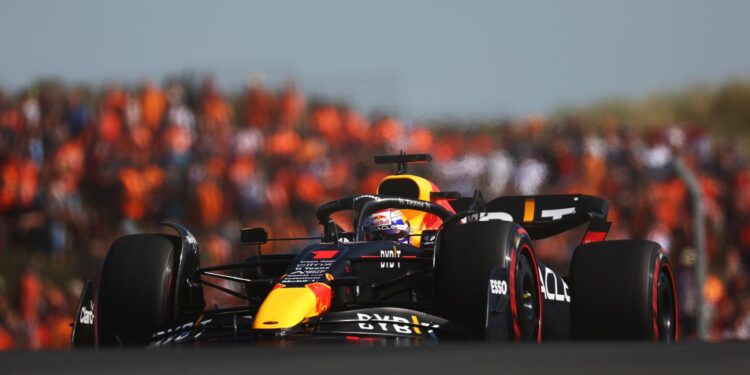 Dutch Grand Prix – Max Verstappen rewarded his army of orange fans by securing pole for his home race but it was very close at the end with Charles Leclerc.

There was no rush to leave the pits at the start of the qualifying hour, but once the Haas cars left the garages that encouraged some others to join and so the cars were out in pairs with the Williamses, Alfa Romeos and AlphaTauris all circulating and setting times before others decided to venture out too.

Kevin Magnussen was the first to set a time, a 1:12.680, and with ten minutes to go it was the home hero Max Verstappen’s 1:11.317 that was in P1 at that stage though neither of the Mercedes, Alpines, Yuki Tsunoda or Lando Norris had put a time on the board.

McLaren will likely have a fine on the horizon as the stewards will be looking at an unsafe release after the session as Norris was sent out into the path of Tsunoda which saw the Japanese racer have to jump on his brakes to avoid contact in the pitlane.

In the final five minutes Charles Leclerc had a better time on his second effort and moved up into P2 with a 1:11.443 and the top two both remained in the pits for the last few minutes while the others tried to improve.

There were a lot of improvements at the end with the track getting better and better, Sebastian Vettel had set the best sector 1 of the session but unfortunately for the Aston Martin driver he had a trip through the gravel which saw him fail to progress.

It was a very competitive session with only half a second covering the top fifteen but those eliminated were: Valtteri Bottas, Daniel Ricciardo, Kevin Magnussen, Vettel and Nicholas Latifi.

There was a Red Flag thrown at the start of the second part of the session, just after Alex Albon had emerged, but it was nothing to do with the Williams driver and instead because a flare had been thrown onto the circuit, the individual responsible for throwing the flare was identified by security and removed from the venue. Aside from disposing of the flare, the marshals were on pigeon shooing duty as the birds were hanging around the edge of the circuit.

When the session restarted six minutes later Albon was once again the first to head out but he had the two Red Bulls for company this time. The Williams racer set a 1:12.078 but that was swiftly improved on by Verstappen, who put in a 1:10.927 even though he was on used tyres.

As the track quietened before the last runs Verstappen was still in P1 with Hamilton a tenth and a half behind, while Pierre Gasly, Esteban Ocon, Zhou Guanyu, Tsunoda and Mick Schumacher were in the drop spots.

Verstappen was once again confident enough in his early effort to remain in the pits for the end of the session and the confidence was not in vain, with only two drivers managing faster times than the Dutchman. Carlos Sainz ended in P1 with a 1:10.814 while Russell was just 0.01 seconds slower.

It was a great effort from Schumacher too with the young German who ended in P9, only a few thousandths slower than Lance Stroll. Gasly, Ocon and Zhou didn’t manage to get themselves out of the elimination zone and were joined by Fernando Alonso and Albon.

Verstappen was the first to take to the track for the final part of qualifying and it was an opening effort of a 1:10.515 for the Red Bull racer but Leclerc managed to go one better than the Dutchman by posting a 1:10.456 as his opening gambit.

As per usual all cars returned to the pits to prepare for their final runs but it would only be nine drivers competing in the top ten shootout as there was a technical issue on Stroll’s Aston Martin.

While Leclerc had a great sector one on his final effort, the Monegasque’s pace didn’t continue for the second sector and while he improved overall Verstappen was able to jump him, by 0.021 seconds, and take pole at home for the second year running.

Sainz took P3, the Spaniard was the last driver within a tenth of the top two as Perez behind spun on his lap bringing out the yellow flags which prevented those behind from being able to complete their laps. That left Hamilton in P4 as the best of the Mercedes while Perez was P5. Russell ended the session in P6 ahead of Norris, Schumacher and Tsunoda.