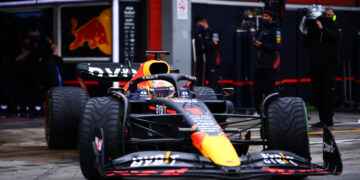 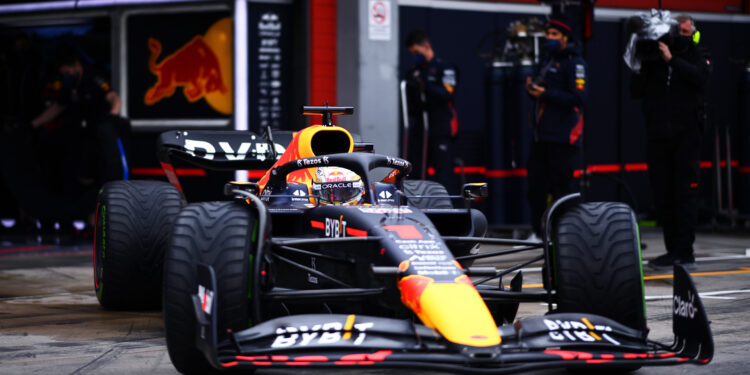 Emilia Romagna Grand Prix – Max Verstappen ended qualifying ahead of Charles Leclerc in a wet and incident-filled qualifying for the first Sprint weekend.

With the rain having stopped and some F2 and F3 sessions since the end of FP1 earlier today, the track was much drier for qualifying and while there were a few out initially on intermediate tyres, the softs were the preference for the majority of the field as qualifying started.

The session was red flagged with just over twelve minutes on the clock as Alex Albon’s right rear brake was on fire before exploding and throwing debris all over the track. The Williams driver was able to make it back to the pits, the fire having gone out by that stage though that was the end of the qualifying session for Albon.

At that point there had only been ten drivers with times on the board and Aston Martin’s Lance Stroll was the best of them with a 1:23.419 on the softs. Q1 resumed after more than ten minutes to clean the track and cars were out pretty quickly to make the most of the remaining session time.

Times continued flailing and with five minutes left, it was Carlos Sainz leading the way with a 1:20.319. The Ferraris then led the way into the 1:19s and Charles Leclerc then sealed the P1 spot with a 1:18.796. Max Verstappen managed to split the Scuderia, slotting in half a second behind Leclerc.

Lewis Hamilton just scraped through to Q2 in P15 0.004 seconds ahead of Yuki Tsunoda in P16. Neither of the AlphaTauri or WIlliams cars made it through and they were joined in the elimination zone by Esteban Ocon who stayed in the garage for the final few minutes of the session and wasn’t able to improve. Alpine said they were investigating a suspected gearbox issue on the Frenchman’s car.

As the second part of qualifying started Leclerc was told that rain would be starting very soon. After the first five minutes, it was Verstappen who led Sainz, the two the only ones into the 1:18s at that point but the session didn’t last much longer for the Ferrari driver as he lost the rear of his car heading into a corner and went careening through the gravel and broke his front left.

The red flag came out, the session paused with just over ten and a half minutes on the clock and before the track went green again the predicted rain did arrive. The session resumed after nine minutes but there was no rush to leave the pits and the circuit remained silent until just after the three minute mark when Sebastian Vettel was the first to head out and see what the new track conditions were like.

Vettel ventured out just after the cameras had watched his teammate, Stroll, get out of his car and resign himself to starting P15 in tomorrow’s Sprint. The Canadian was joined in the Q2 elimination zone by both Mercedes, Zhou Guanyu and Mick Schumacher.

There was a queue of cars waiting at the end of the pitlane when the final part of qualifying started and all nine cars were out and circulating on intermediates within the first few minutes, Sainz progressed but won’t be taking part after his crash. Q3 was not to be left out of the red flag party and the session was paused with just less than 9 minutes of running.

Similar to Bottas at the end of FP1, Kevin Magnussen went off into the gravel but managed to stop his car before the front wing made contact with the barrier. The Dane was able to recover the car back to the pits and the Haas was able to continue in the pole shootout when it resumed.

Everyone was back out when Q3 got back underway and after the first times were posted it was Leclerc in provisional P1 with a 1:28.778, just 0.020 quicker than Verstappen as the McLarens slotted into P3 and P4.

The reigning champion had just improved to take P1 with a 1:27.999 when the session was red flagged once again. This time Bottas’ Alfa Romeo stopped at the side of the track, there were yellow flags out in that area while Verstappen set his best time but the footage showed that the Dutchman did slow down going past.

There were only 2:58 minutes on the clock when the session resumed and there was once again a queue of cars at the end of the pit lane waiting for the green light, Verstappen and Leclerc at the head of it. There was no chance to set any times however as Norris ended the day nose first in the barrier, not able to emulate Bottas and Magnussen’s skin of their teeth saves, and the session finished slightly early with a final red flag.

Despite the crash, Norris ended qualifying in P3 behind Verstappen and Leclerc. Magnussen, who caused the first red of Q3, ended in P4, 1.165 seconds off the Red Bull’s time.

Fernando Alonso was P5 for Alpine ahead of Daniel Ricciardo in the second McLaren. Sergio Perez ended in P7 with a 1:29.808, the last driver within two seconds of the fastest time.

Bottas was P8 ahead of Vettel and Sainz was P10 as he didn’t take part in the final part of the session.