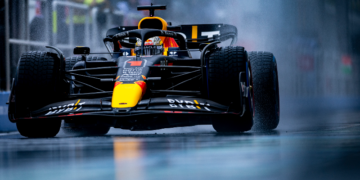 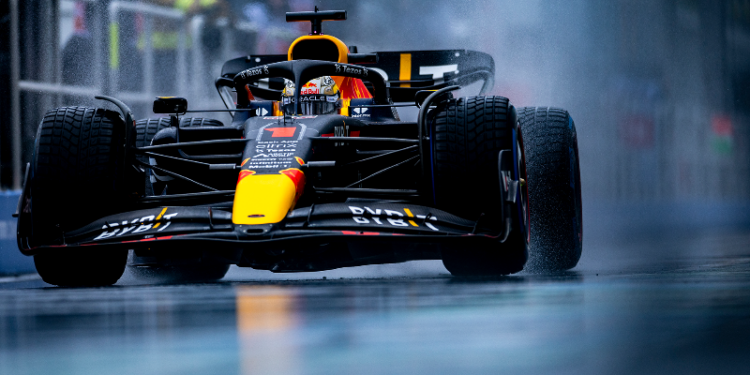 Canadian Grand Prix – Max Verstappen dominated in the wet but it was all to play for behind him and Fernando Alonso will start alongside him.

Qualifying started with the weather just as it was during free practice three: cold, dull and wet. The Alfa Romeos of Valtteri Bottas and Zhou Guanyu were the first out onto the track as the light went green at the end of the pit lane but they weren’t the only ones as all cars had headed out by the time the Finn had completed his circuit around the track.

The first time on the board was a 1:38.932 from Bottas but with all drivers out and times dropping with every attempt, the leaderboard was in a constant state of flux. With ten minutes left of the first part of qualifying George Russell was sitting in P1 with a 1:34.989, ahead of Pierre Gasly and Carlos Sainz.

Although the visibility at ground level was very poor with the number of cars circulating, and the amount of water being thrown into the air, there was a dryer driving line appearing around the track.

Despite having grid penalties for power unit changes, which will see him start at the back of the field tomorrow, Charles Leclerc was lapping and setting times along with everyone else, Yuki Tsunoda meanwhile, who will be starting alongside Leclerc at the back due to part changes of his own, the Japanese driver kept himself well out of the way of potential danger as he only put in a could of laps at the start and then retreated to the dryer confines of the AlphaTauri garage.

There was a late Yellow Flag when Carlos Sainz went straight into the runoff but he was able to recover back to the track and allow everyone to continue pushing to improve. In the end it was game over for Gasly, Sebastian Vettel, Lance Stroll, Nicholas Latifi and Tsunoda, both Canadians signing off early while Gasly and Vettel were not impressed with their lack of pace after both were in the top three in FP3 earlier.

There stewards racked up a quite a bit of post-session work for themselves, they’ll be meeting with Stroll (for failing to slow under Yellow Flags), Gasly (for failing to follow the Race Director’s instructions), and Leclerc, Sainz and Alex Albon (for driving unnecessarily slowly).

All cars bar Leclerc were out on track as the fight for the top ten started, this time there was quite a 50/50 split between who started Q2 on the full wets and who were on the intermediates. Fernando Alonso, Sainz, Kevin Magnussen, Esteban Ocon, Mick Schumacher, Sergio Perez and Albon were the ones who opted for the green-ringed tyres initially and Alonso was fastest with a 1:30.910 as the clock hit the ten minute mark.

While the inters were quick, they were also slippy as first Albon slid off, the Williams driver was able to reverse and recover but as he did, Perez had an incident of his own and speared his Red Bull into the barriers at T3/T4. The Mexican’s car was well wedged into the barrier so he wasn’t able to get reverse to work which brought out the Red Flag.

The clock initially failed to stop when the Red Flag was flown and it continued to tick down to 8 minutes before reverting to nine minutes and six seconds, but then being brought down to nine minutes flat. With the lull in the session, the stewards took the time to review some of the investigations and decided that Stroll wouldn’t need to go see them and that Sainz was cleared from his unsafe rejoin after his incident at the end of Q1 (not a previously issued investigation).

When the session resumed all cars emerged on the intermediate tyres, Lando Norris only emerged with three minutes to go having reported an issue with his power unit earlier in the session, the McLaren driver was called back into the pits however and ended in P14 without a time on the board.

Albon and Bottas joined Perez, Norris and Leclerc in the drop zone while there was delight for Zhou as his P7 saw him through to Q3 for the first time. At the front it was Verstappen with a 1:23.746 over a second faster than Alonso and Russell in P2 and P3.

The pole shootout started with all cars heading out on Intermediate tyres and while the straights seemed to be quite dry, there was still a lot of standing water off the driving line and in the corners.

Lewis Hamilton was the first to set a time, a 1:24.360, and once everyone had put in their opening effort, that saw the Mercedes driver into P5 with Verstappen’s 1:22.701 ruling the timesheets. With times not improving on further laps, new inters were slotted onto all but Russell who took the risk and gambled on the soft tyres. It was a slippery ride for the Brit, whose rear wing took a tap at T2 as he slid off onto the grass.

Verstappen ended up sealing pole with a 1:21.299, behind him, while Russell was struggling with the dry tyres, Hamilton briefly made it into P2, with a time 1.592 seconds slower than the Red Bull, but was demoted by Sainz and Alonso.

The Alpine driver’s lap 0.645 seconds off the Dutchman’s effort with Sainz a tenth and a half back to take P3. Hamilton will start the Grand Prix from P4 while the two Haas cars of Magnussen and Schumacher will be in P5 and P6. Ocon put the second Alpine into P7, ahead of Russell, while the fifth row will see Daniel Ricciardo ahead of Zhou.