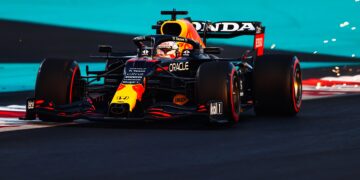 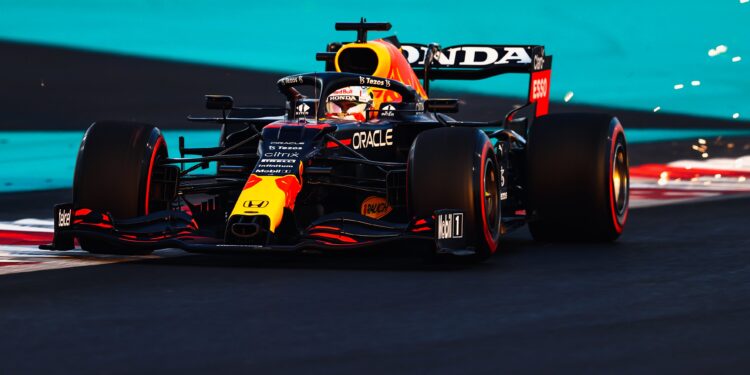 Abu Dhabi Grand Prix – Red Bull’s Max Verstappen has one hand on the title as the Dutchman claimed pole for the title showdown at Abu Dhabi.

Mercedes’ Lewis Hamilton and title contender starts behind, albeit on the medium tyres, with McLaren’s Lando Norris starting from the second row on the grid in third place.

Hamilton did look to have the advantage, but, aided by a tow from his teammate Sergio Perez, Verstappen set a 1:22.109, nearly four tenths clear of the Mercedes.

In the first round of qualifying in the dramatic championship showdown, it was Verstappen who was first of the contenders out on track. A time of 1:23.6 was enough to see the Dutchman sit at the top of the timesheets, with Pierre Gasly and Yuki Tsunoda in the AlphaTauri sister team close behind in second and third.

But it was Hamilton, aided by blistering times in sectors two and three, who jumped up into first place with a 1:23.2, with his teammate Bottas in second place – a tenth behind. Sergio Perez in the other Red Bull made his presence known and set the third fastest time, a tenth faster than Verstappen.

Verstappen regrouped and shot up into second place with a 1:23.3, splitting the Mercedes cars and just 0.056 seconds behind Hamilton’s benchmark.

McLaren looked quick with Lando Norris getting himself into fourth place, and Daniel Ricciardo in seventh. However, Norris ran over a bollard in the final sector that was kicked off by Haas driver Mick Schumacher. The session red flagged to recover and repair the strewn bollard.

The session resumed just a few moments later with just over six minutes of Q1 remaining. The top ten didn’t venture onto the track straight away, however the under pressure Ferrari team felt the need to go out and set times on the soft tyres. Having completed their initial laps on the mediums, Charles Leclerc and Carlos Sainz moved up into the top ten.

The rest of the drivers came out with a few minutes remaining, except Verstappen who elected to stay in the garage, confident of his time.

Hamilton set the timing screens alight and crossed the line to set a 1:22.8, nearly half a second clear of his previous time. Bottas slotted into second place, three tenths behind his teammate setting an ominous tone for the rest of qualifying.

The drivers knocked out in Q1 were Nicholas Latifi in the Williams, teammate George Russell, Alfa Romeo’s Kimi Raikkonen in his last race weekend, Mick Schumacher, and Nikita Mazepin for Haas.

For the second part of qualifying, the drivers choose what compound they will start the race on. Mercedes elected for the medium tyres, as did Red Bull. The AlphaTauri team also opted for the mediums, with the rest of the field choosing the soft compound.

As dusk started to fall, Hamilton’s first attempt was a 1:23.1 with teammate Bottas half a tenth behind in second place. However, Verstappen’s grip on the championship held firm with a 1:23.1, just 0.004 seconds behind from the Mercedes. Tsunoda continued his strong weekend and went fourth fastest ahead of Norris and Perez, who was half a second down on his teammate Verstappen.

However, Ferrari looked to be stealing the show with Sainz going up into first place. Teammate Leclerc got himself up into fourth place between Verstappen and Bottas. Sainz was just 0.011 seconds clear of Hamilton, but did use the soft tyres.

Verstappen had a horrendous lockup and flat spotted his medium tyres, with those set to be the starting tyres, Red Bull were resigned to swapping the Dutchman to soft tyres for his second run.

Hamilton pipped Sainz to first on his second run with a 1:23.145, however Perez went faster still on the soft tyres 0.01 seconds clear of Hamilton. But it was Verstappen who set the pace with a 1:22.8 to go quicker, but will start the race on the soft tyres.

Alpine’s Fernando Alonso, Gasly, Aston Martin’s Lance Stroll, Alfa Romeo’s Antonio Giovinazzi in his final F1 race, and Sebastian Vettel in the other Aston Martin were all knocked out in Q2.

As twilight descended the Yas Marina circuit, track temperatures cooled from earlier in the day to 28 degrees.

On the drivers first runs in this final shootout for pole, Verstappen looked quick and crossed the line to set a 1:22.1. Hamilton couldn’t match his pace though and was half a second adrift to go into second place as this dramatic season finale took another twist. Perez backed out of his lap to allow Verstappen a mammoth two down the back straight.

In the battle of the teammates, it was Perez who won out against Bottas by getting into third. Bottas could only manage fourth place, two tenths slower than the Red Bull.

In the second runs, Mercedes didn’t bother with a tow and Hamilton improved, but couldn’t get the better of Verstappen. Norris raised some eyebrows and got up into third place on the second row of the grid just ahead of Perez.

Sainz set the fifth fastest time with Bottas in the other Mercedes unable to trouble the front runners in sixth place.

Leclerc was in seventh ahead of Tsunoda in eighth. Alpine’s Esteban Ocon was in ninth place with Ricciardo rounding out the top ten.