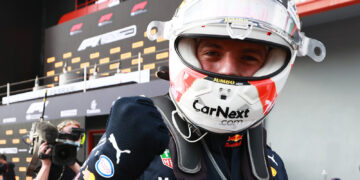 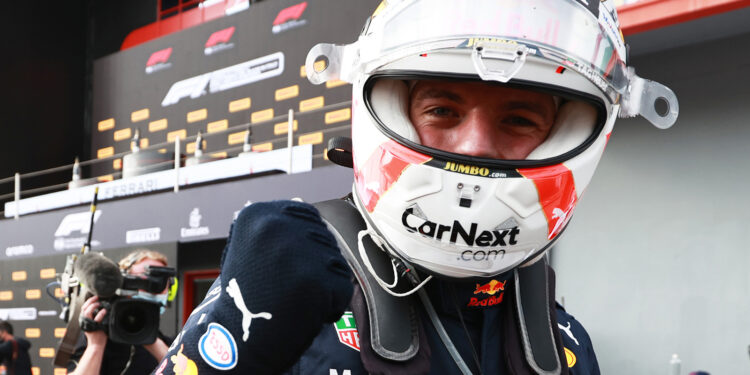 With the rain coming down unexpectedly not too long before the race start, the drivers headed off the grid and into mostly unknown conditions. Starting third Verstappen had the best start as he got alongside pole sitter, Lewis Hamilton, and the two went into the first chicane side by side. The Mercedes ended up going slightly off track and over the bumps causing some damage to the car but the Brit only lost the one place to the Red Bull.

“It was very challenging out there especially at the beginning,” said Verstappen. “It was very hard to stay on track to be honest, it was very slippery and then of course with the tyres degrading in the wet and then choose the right moment to go onto slicks is never easy.

“I think we managed everything well then a little moment at my restart but everything else went really well today, so of course, very happy with that.”

It wasn’t only Verstappen who had a good start, teammate Sergio Perez also got away well once the lights went out but couldn’t capitalize on it. Verstappen said the team had worked hard on their starts and it has paid off for them.

“Last year we were struggling a little bit off the line but I think we worked really hard to make that better and already you saw that in Bahrain but now in these tricky conditions we did a great job.”

From then there were only really two notable moments for the Dutch driver, the first at the pitstop where, if not for a slow stop for Hamilton, the lead could have easily gone back to the Mercedes driver. And then at the restart, following the Red Flag period for a coming together between Valtteri Bottas and George Russell, where Verstappen clattered over a chicane and almost spun as the Safety Car was leading them to the start.

“A little moment just when I was trying to warm [the tyres] with throttle but yeah, luckily we didn’t spin.”

With Hamilton taking the Fastest Lap at the end of the race, the Mercedes driver is only one point ahead of Verstappen in the championship, but given this was only the second race, the Red Bull driver is not reading into it saying: “[It’s a] long season, so stay calm.”