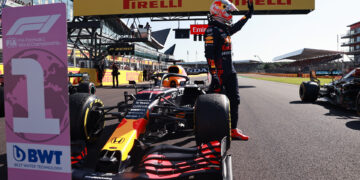 Verstappen “very worried” by flaming brakes on the grid

Verstappen “very worried” by flaming brakes on the grid 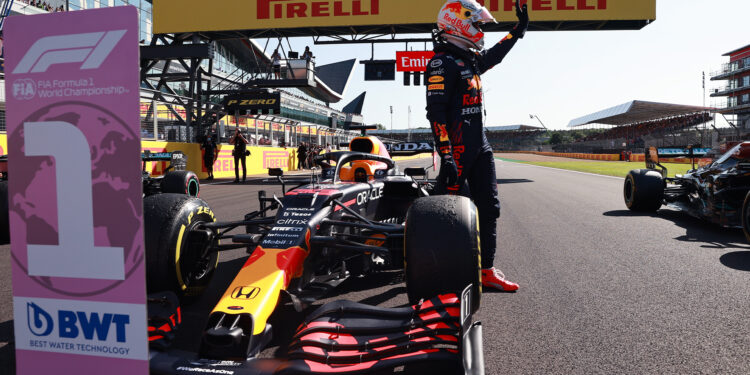 British Grand Prix – Despite his brake fire on the grid, Max Verstappen made the better start and was able to snatch the lead from Hamilton.

It made for a dramatic image which led to a dramatic first lap in the inaugural Sprint Qualifying event, Verstappen’s Red Bull smoking and flaming as he waited for the grid to form and the lights to go out. The Dutch driver admitted to be very anxious as he watched the flames but everything worked out and that the fans would’ve gotten some great pictures as a result.

“I was really worried,” Verstappen said afterwards. “A little bit of fire, it’s not…it’s okay but at one point it was becoming quite big and I was just looking in my mirror to the guys in the back, saying please, speed up, speed up.

“So then, of course, I was not sure going into Turn 3 if my brakes were going to work but luckily it didn’t do too much damage. I saw a few people in the grandstand taking pictures when the brakes were on fire. For sure they have a good few shots there.“

On another day, F1 Sprint winner @Max33Verstappen might not have got off the the start line at Silverstone 👀 🔥 😲#BritishGP 🇬🇧 #F1Sprint pic.twitter.com/QQAgSp5onD

The Red Bull driver still managed a better start than pole man, Lewis Hamilton, and once he got through to the lead he didn’t relinquish it and took the three points from today’s victory as well as sealing himself pole for tomorrow’s Grand Prix.

“Around here’s difficult to pass but we had a good start and a good fight with Lewis in the first lap and then we tried to do our own pace, but you could see we were pushing each other hard because at the end of the race the tyres were blistering a lot so we had to manage that to the end.

“Nevertheless, happy to have scored those three points and it sounds a bit funny to then hear ‘you scored a pole position’ but anyway we’ll take it. I think it’ll be a really exciting battle tomorrow.”

Despite the weirdness of winning the Sprint and being congratulated for taking pole, the championship leader said he enjoyed the newly-tried addition to the weekend as it was fun to start a race without a heavily-fuelled car.

“I think what was nice in the beginning was of course you start with lower fuel in this race, so naturally the cars are faster and that is what you like and the car is a bit more alive. So that was fun compared to a heavy car and everything and it’s just slow in the beginning, so I enjoyed that bit for sure.”

However, there was a downside to that as the tyres took more of a beating at the start and consequently blistered, making life harder for the drivers in the latter stages of the session.

“We start the race on lower fuel,” Verstappen explained. “And then we really push these cars through the fast corners lap after lap so it’s very hard on tyres but it’s the same for everyone so we have to deal with it.”

Looking forward to tomorrow’s Grand Prix Verstappen is expecting a good fight but laments the fact that the cars went into Parc Ferme conditions on Friday afternoon so Red Bull weren’t able to tweak anything to help them lose less time to Mercedes on the straights.

“I think what we learned today is that it’s very close again. It seems like we are quick through corners, they are quick on the straight this weekend and after one free practice session, and then you’re not allowed to make any changes and you don’t get it right, then you’re a bit stuck.

“So I think we’re a bit stuck on the straight, so that’s why we have to make up our time in the corners. It seemed like in this more-or-less flat-out race, you cannot really call it flat-out but at least pushing more, the pace was alright but I still expect with a pit stop coming into play, or two pit stops, who knows, it’s again going to be a good fight.”