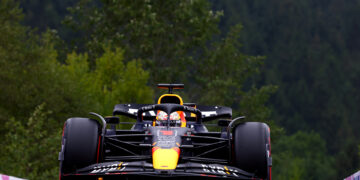 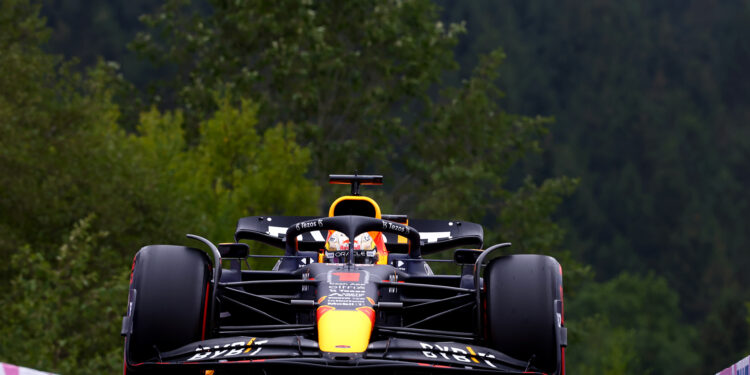 Belgian Grand Prix – Max Verstappen was almost a second quicker than the rest of the grid in FP2 as the rain once again made an appearance at the end.

The Alfa Romeo’s were the first to take to the track as the second practice started, Valtteri Bottas looking to make up for the lost session earlier as he only got two laps before technical issues saw him relegated to the pits for the rest of the practice.

Whereas FP1 saw the track declared as wet initially and then the drivers finding it dry when they headed out on intermediate tyres, for FP2 the dry compounds were on from the start but the conditions were actually slightly wetter than expected, not enough to swap compounds however.

The first time on the board was a 1:50.637 from Zhou Guanyu on the mediums but that was quickly bested and Max Verstappen dropped the target down to a 1:47.699, also on the yellow ringed tyres.

Carlos Sainz, who was fastest in FP1, briefly took over at the top of the times with a 1:47.390 despite doing what he described as “a little bit of rallying” when he went through some gravel during the lap. Verstappen did not stay off P1 for long though, going over four tenths quicker than the Ferrari and had extended his lead even more by the time the first quarter of the session had passed, with a 1:46.850.

The track went quiet, apart from Pierre Gasly, around the twenty minute mark as the drivers returned to the pits to prepare for their qualifying simulation runs. While Sainz did improve to the top with a 1:46.6, Verstappen’s effort blew that out of the water with the Red Bull driver setting a 1:45.507. Charles Leclerc was the one to get closest on those first runs but he was still 0.862 seconds slower.

Long runs were the next item to tick off on the checklist and in the final fifteen minutes of the session the rain once again made an appearance leading to some very twitchy moments and off-track excursions. All cars returned to the dry of the garages with seven minutes left of the session.

The Aston Martins did venture out in the final five minutes but only set installation laps on the wets before returning to the pits. All cars, aside from Stroll and the two Williams cars, headed back out on slicks as the last minute of the session ticked down so that they would be able to complete a practice start.

The session ended with Verstappen in P1, well out ahead of Leclerc, the Ferrari driver P2 was the only car within a second of the reigning champion. Lando Norris put his McLaren into P3 with a 1:46.589 while Lance Stroll was the best of the Astons in P4.

Sainz was P5, 1.142 seconds off the Red Bull, while Lewis Hamilton was two tenths further back in P6. Fernando Alonso split the two Mercedes, putting his Alpine into P7 with a 1:46.975 while George Russell slotted into P8. Daniel Ricciardo was P9 while Sergio Perez was the last driver within two seconds of his teammate in P10, the Mexican having set a 1:47.346.